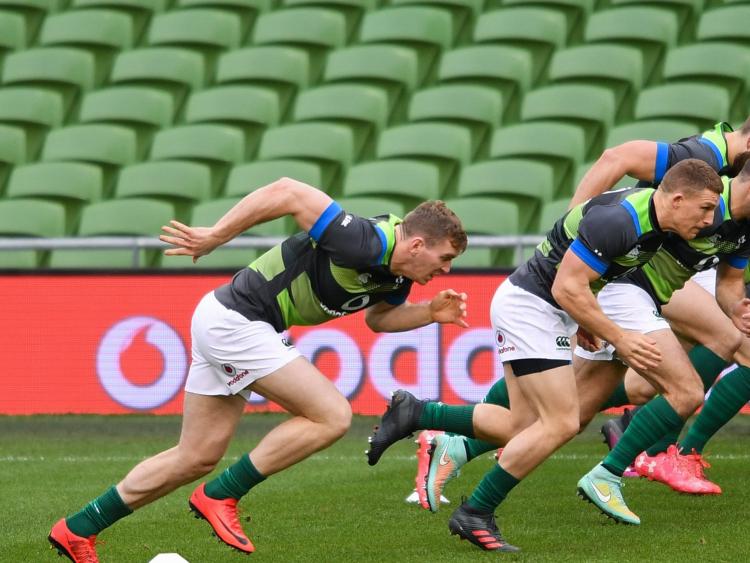 Chris Farrell, left, and Andrew Conway, both of Munster have been included in Ireland's Rugby World Cup squad

TWELVE Munster have been included in Ireland's Rugby World Cup squad which travels to Japan later this month.

The squad had been due to be revealed on Sunday next, but with its make-up being circulated widely in the media on Monday morning it was decided to confirm the players who will travel to Japan at lunchtime on Monday.

The shock omission from the squad was that of Leinster second row Devin Toner. Munster's South African-born second row Jean Kleyn was given the nod to travel to Japan ahead of 33-year-old Toner.

Munster centre Chris Farrell has gained inclusion ahead of the versatile Will Addison of Ulster as head coach Schmidt opted for a five-strong centre line-up.

Ireland head coach Joe Schmidt said of his Rugby World up squad: "It was a difficult thing right from the start to have the 45 that we had.  We went down to 40 players and to go from 40 down to 31 was really difficult, but we had a process whereby we looked back through every training, looked through the games.

"There were some guys who obviously had more experience and probably had more credit in the bank and were more established and there were other guys who were trying to force their way into group and trying to get a balance of current form versus previous performance, it’s always a very very difficult conundrum to try to solve.

"It was one of those typical selection meetings where maybe 20-25 of the players are listed straight away and it’s those ones where you’re are trying to get balance where it’s very difficult to choose between two players and two players offer slightly different things and you’re trying then to narrow down and trying to get the best balance across the squad of the entire 31 because that’s part of what you need to do because you’ve got to make sure you have cover that’s immediate even though you can replace players there is obviously a big time delay in that.”

Ireland’s opening World Cup Pool A clash will be against Scotland on Sunday, September 22.

Six days later Ireland will take on tournament hosts Japan in Shizuoka before playing Russia in Kobe the following Thursday. Ireland’s final pool game is against Samoa on Saturday, October 12 in Fukuoka.

Ireland play Wales in the final game of the Guinness Series 2019 at Aviva Stadium on Saturday.