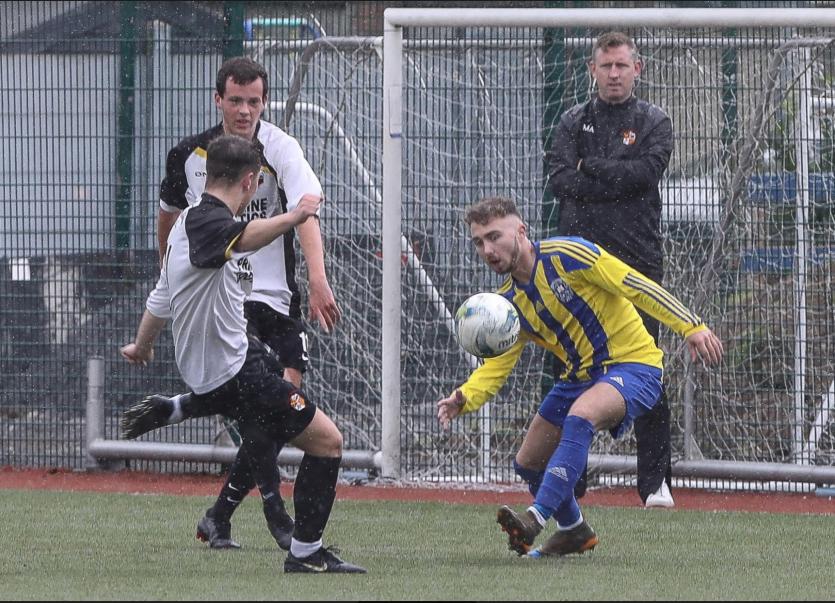 Aisling Annacotty 3 Fairview Rgs 3 - The top game of the day produced a thriller in Annacotty when the home side gave up a two goal lead before snatching a last minute equaliser to share the spoils with Fairview in a 3-3 draw.

A foul on Aaron Murphy presented Nathan O’Callaghan with the chance to open the scoring from the resultant penalty kick.

Immediately after the break Aisling doubled their lead when Shane Clarke set up Brendan O’Dwyer to fire home from 20 yards.

Aisling were still celebrating when Jeffery Judge pulled one back and within two minutes it was all level when Dermot Fitzgerald headed in from Mark Slattery’s delivery.

Fairview’s comeback looked complete when James Fitzgerald’s inswinging corner ended up in the back of the net to put the visitors in front. However in the 90th minute ten man Fairview conceded a second spot kick and O’Callaghan stepped up to keep his nerve and score to earn a point for his side.

Balla opened up a two point lead in the table with an easy win over an under strength Nenagh selection.

Kevin Nolan put the Blues on their way and before Adrian Power added a second.

Conor Ellis scored before the break to make it 3-0.

It was more of the same on the restart. Derek Daly scored and Power added his second and Ellis completed his second hat trick in three days.

Pike kept pace with the leaders with a seven goal performance at home to Prospect.

It took the home side 23 minutes to break down the visitors; Conor Kavanagh heading home.

Two goals inside three minutes before half time by Steven McGann and Eoin Hanrahan put paid to any further resistance.

After the break, further scores by Colin Daly (2), Kavanagh and Shane Walsh completed the rout.

Geraldines take over third place after beating a game Mungret Regional XI in Garryowen on Sunday.

The visitors, fielding the youngest side in the League, caused Geraldines plenty of problems early on and could well have been in the lead before Kevin Barry opened the scoring from close range.

Minutes later Barry scored his second when sliding the ball past James Roche from 20 yards.

Mungret got some reward for their efforts when Yakuba Yabre scored from close range to make it a one goal game.

It was a nervy second half for Geraldines until Danny O'Neill settled the issue with a spectacular long range effort.

Janesboro recovered well from last week’s defeat to Geraldines by recording their fourth win of the season easing past Kilmallock at the county venue.

Arron Nunan has been in fine form since he return to the Boro fold and he put the team on their way with the opening goal.

Coonagh Utd recorded their first ever Premier League win on Sunday when they defeated high flying Regional Utd in Coonagh.

Two spectacular goals from Ger Myles in the opening half stopped Regional in their tracks and while the home side had to defend stoutly in the second half, they were not to be denied the win.