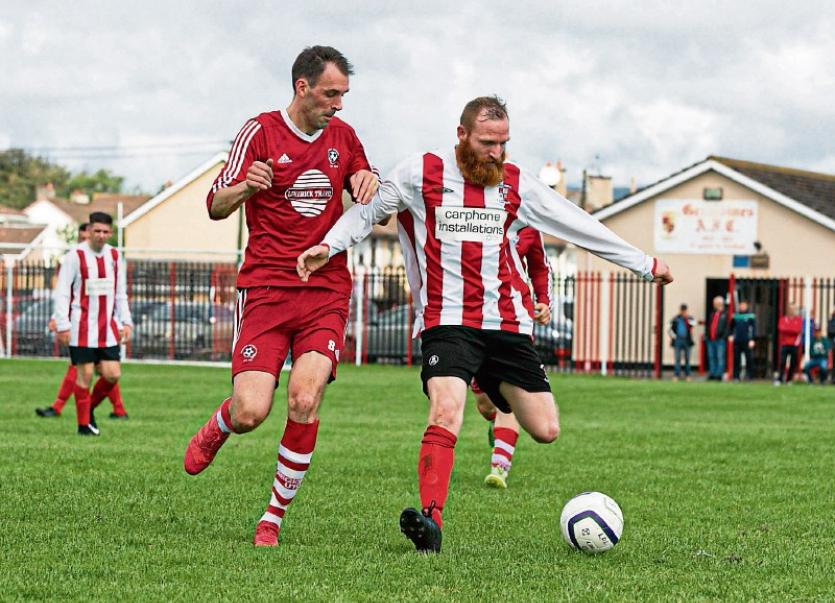 THURDAY's series of games in round five of the Premier League throws up a beauty when Fairview Rangers host Pike Rovers at the Fairgreen. No doubt fans of Janesboro and Ballynanty Rovers would not agree, but most people have this pair tagged as their favourites to win the Premier League this season.

While both started the season in flying form, they suffered a set back to bring them back to earth in recent games.

Pike Rovers retained the vast bulk of last season’s squad and started the season with a 6-1 win over holders Janesboro. However they stumbled to a 2-2 draw against Geraldines in a later game.

Likewise Fairview’s impressive start was halted when they came unstuck at home to a hard working Ballynanty Rvs XI who took the points in a 2-1 win.

Both rebounded well last weekend to get their march back on track. Pike Rovers beat Coonagh 4-0 while Fairview travelled to Nenagh and won 3-0.

The game will showcase the best of talent in local football and is well worth taking time out to have a look.

The exciting Fairview front runners including Darragh Rainsford and Ross Mann are up against Pat Mullins and Wayne Colbert.

That in itself is an attraction but at the other end Dermot Fitzgerald, Mark Slattery and Paul Danaher face off against last season’s top scorer Jonathan Grant and Eoin Hanrahan to further whet the appetite.

The middle of the park possibly pits Conor Kavanagh, Shane Walsh and Colin Daly against Jeffery Judge, Ger Barry and Adam Frahill but with such strong squads to pick from, this could be altered on the night.

Although winning the Lawson Cup last season, Fairview are hoping this could be the year they really turn things around at the club after a number barren years.

Tonight’s game is the first real test of matching the better teams in the League.

The last time the sides met was in the Lawson Cup final in May when Fairview proved best.

Joint leaders with Pike Rvs are Ballynanty Rovers and they make the trip across town to take on Mungret Regional.

‘Balla’ have been using up their good luck charms this season needing later Adrian Power goals to draw with Kilmallock and beat Prospect Priory.

In between they defended stoutly and took their chances to defeat Fairview Rgs but they need to put away the chances they create if they hope to challenge for the title.

They are rumoured to be in the process of adding a number of players to the squad which could have the desired effect.

They meet a Mungret side still adjusting to life in the top flight. They posted their first win of the season last week when they beat Prospect but had the misfortune to meet ‘Boro in the next game.

Janesboro have re-acted well to the news that Shane Clarke is to leave the club and they posted a 2-0 win over Mungret on Sunday.

The addition of Pat McDonagh from Regional will have boosted the squad. Tomorrow they face a Geraldines XI still smarting from a surprising 4-1 defeat at home to Regional on Sunday.

The ‘Dines’ took the field lethargically on Sunday and a repeat of that will serve up a similar result this time out.

However, as the Candy-stripes have shown when focused they can match the best.

Following the loss of virtually a whole team, many people thought Regional Utd would struggle this season but thus far they have raised a few eyebrows with a number of superb displays that sees them lie just behind the leaders.

On Thursday they host Kilmallock in Dooradoyle and another three pointer is not out of the question. The addition of former Charleville striker Shane Dillon and Paul Sheahan as well as former youth player Paudie Hartigan has given them lightning pace up front so the visitors could be in for a tough time.

With the news of Shane Clarke arrival Aisling Annacotty would have been forgiven for a slight distraction but they picked up a welcome win over Kilmallock last weekend.

This evening they host Coonagh Utd, a team who have been very unlucky on a number of occasions this season.

The final game sees Prospect Priory host Nenagh AFC in Cals Park. Prospect suffered the heartbreak of a last minute defeat to Balla last weekend and is sure to have taken a toll.

It remains to be seen how they react but visitors Nenagh will be only concerned of their own fate following a number of defeats.