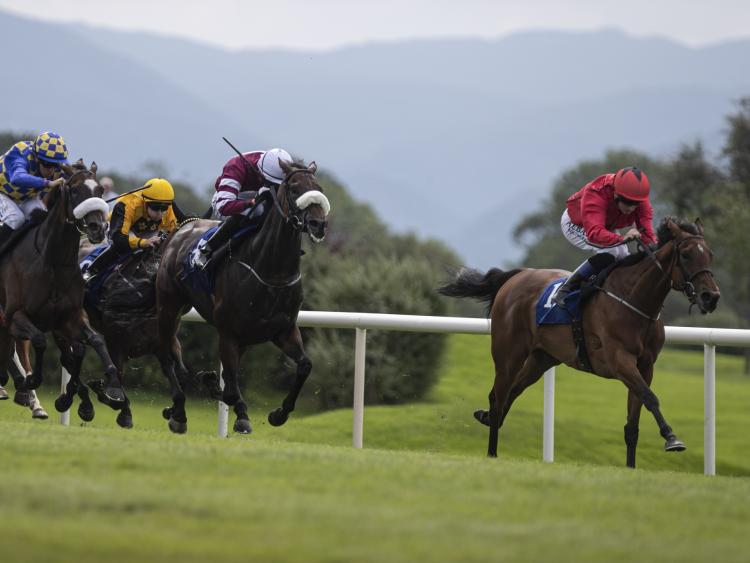 Shanagolden’s Chris Hayes had a big week in the saddle with a bounty of winners. He teamed up with Noel Meade who is enjoying a fair run of form himself with his Flat string and looks to have a useful two-year-old on his hands in the shape of Helvic Dream which impressed when taking the 7f auction race at Roscommon on Monday. Hayes’ mount had previously shaped well in defeat at Down Royal and Galway and gained his reward in good style at odds of 11/4 on his third attempt.

Hayes landed a far bigger pot when teaming up with veteran trainer John Joe Walsh to win the €50,000 KWD Kingdom Gold Cup Handicap with the game Davids Charm. The jockey had the well-supported 2/1 favourite in front over a furlong from home and the partnership was always holding the Dermot Weld-trained Dalton Highway on the run to the line. Enda Bolger won the 2m4f handicap chase with 8/1 chance Thatbeatsbanagher which was ridden by Donal McInerney. The five-year-old scored a two and a half length win over the Denis Hogan-trained Mister Butler and set Bolger up for a double on the day. He also won the 2m7f beginners’ chase with the impressive Movewiththetimes which was a second winner for Mark Walsh on his first day riding since breaking his leg at the Punchestown festival. JP McManus owned both Bolger winners and he also collected when the Padraig Roche-trained Act In Time collected earlier in the evening.

Despite not being seen out since Christmas, the Enda Bolger-trained Ballyoisin put up a performance of some class to give lumps of weight away to his rivals in the feature 2m5f at Killarney on Friday. Under Darragh O'Keeffe, the 11/4 favourite raced with great enthusiasm in front, and extended from the second last to win impressively in the end, as he gave 31lbs and a six-length beating to second-favourite Lakemilan. He could well now go to Listowel for the same handicap hurdle that he won last year.

Having narrowly lost out in the Listed Cairn Rouge Stakes under Frankie Dettori at Killarney in July, the Fozzy Stack-trained filly Lady Wannabe earned a deserved success as she returned to the track to win the feature Dunloe Hotel & Gardens Vincent O'Brien Ruby Stakes on Saturday. The middle leg of a treble for Chris Hayes, the daughter of Camelot picked up well to go to the front and got first run on her rivals, and then held on with reasonable comfort inside the final furlong to beat Waitingfortheday by a length-and-three-quarters. She was returned the 5/1 favourite. Hayes had earlier won the 8f nursery handicap on the Kevin Prendergast-trained Troop Commander at odds of 9/1 and was back in the winners’ enclosure as 8/1 chance Cautious Approach, trained by Richard O’Brien, won the opening division of the 8f handicap. Galway maiden winner and Moyglare Stud Stakes entrant Raven’s Cry that landed the odds in the opening median auction race at Killarney on Saturday. Ridden by Billy Lee, the daughter of Raven’s Pass was briefly pressed by runner-up Baby Zeus over a furlong out, but she pulled out plenty inside the final furlong, going away to win by three-and-a-quarter lengths. She was returned the 8/11 favourite and looks likely to be contesting a group race next for trainer Paddy Twomey and owner Emma Kennedy.