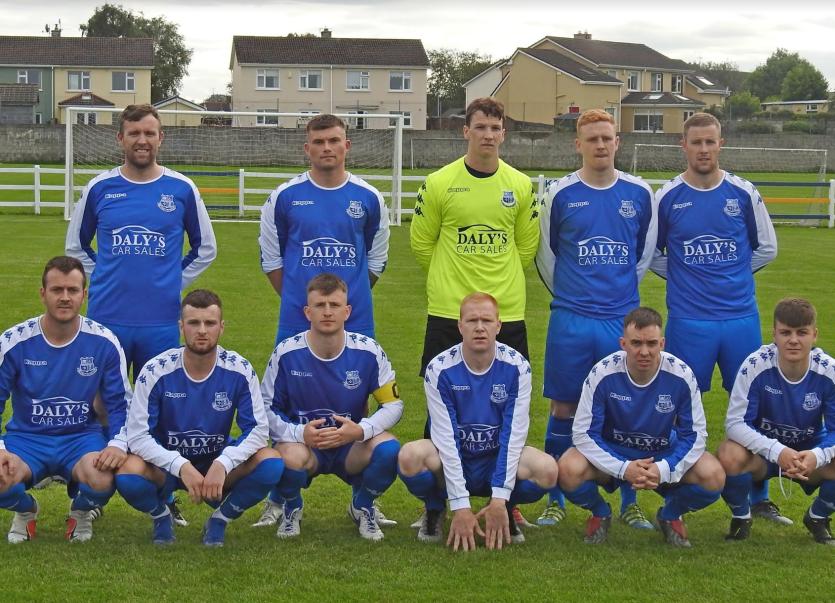 We had the first major shock of the season tonight when Ballynanty Rvs clipped the wings of high flying Fairview Rgs in the Fairgreen. Balla, far from impressive in their opening two outings and short a number of players on the night, were given little chance of beating the star studded home side but they turned in a courageous performance to score a superb win.

Having to rely on a solid defence for much of the game the Blues showed great discipline and held their shape throughout.

Along with a solid defence and keeper they had the excellent Adrian Power as the outlet time after time to ease the pressure.

After soaking up much pressure Barry Quinn won a corner for the visitors and Derek Daly’s delivery was headed home by Jordon Boland.

After the break Fairview went in search of an equaliser but were caught on the break when Dylan Kelly Higgins tacked on a second.

Fairview pulled one back with six minutes to play through Paul Danaher but solid defending won the day and Balla picked up the points to go joint top of the table. 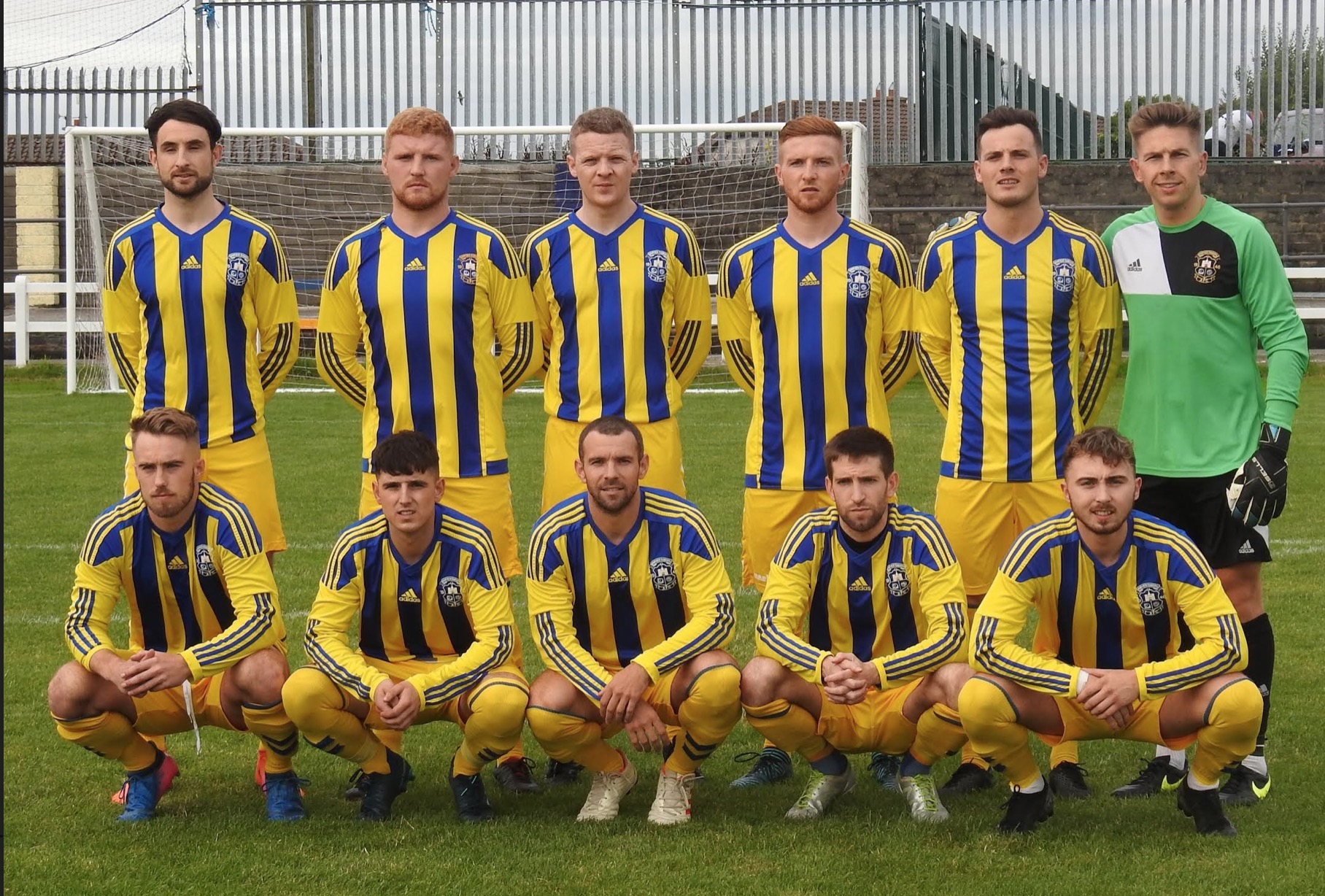 Geraldines are tied for first following their second success win, a 4-0 defeat of Aisling in Annacotty.

The home side struggled to live with the power of Kevin Barry who tormented all night.

Scoreless at the break Barry Harnett put Dines head before Danny O’Neill fired in the second.

A bullet from Kevin Barry and a goal from Karl Turner completed the scoring.

Pike Rvs scored a facile win over an under strength Kilmallock XI.

Steve McGann opened the scoring and a hat trick from Jonathan Grant along with a brace from Shane Walsh and one from Colin Daly completed the rout.

After a poor opener Janesboro are right back in the mix of the Premier League race after a 3-2 win at Regional. Shane Clarke 0

Martin Madden put the home side in front but Shane Clarke levelled before the break.

Tyrique Leamy put Boro in front but Paul Sheehan equalised before Shane Stack cored the winner for the visitors.

A game that saw the lead change hands on a number of occasions went the way of Nenagh in a nine goal game.

Seamus Moloney and a hat trick from Ger Myles accounted for the Coonagh scores but Jamie Bergin (2), Luke Kennedy, Craig Connolly and an own gaol swung it Nenagh s way.

Mungret Regional got their Premier account off the ground tonight when they defeated a hard working Prospect XI. Brian Cotter scored the only goal of the game to seal the points.

In the Premier A League, Murroe moved clear at the top of the table thanks to a 3-1 win over Aisling. The Quinn Brothers, Liam (2) and Brian (1) shared the goals.
Cappamore hit Corbally Utd for five; Andy Murphy (2), Aaron Daly, Paddy Byrnes and Rob McLoughlin were on the mark.
Two of the fancied sides in this Division Hill Celtic and Fairview Rgs B played out a 1-1 draw in Hogan Park. Alex Purcell scored for the home side, Adam O'Regan netted for View.
Newport and Holycross played out a thrilling 10 goal game. Paul Ryan and Keith Mawdsley scored a hat trick each for Newport. A hat trick from Tony Burke (3) and John Carew accounted for the Holycross scores.
Charleville edged out Carew Park 4-2. AJ Moloney (2), Cian McNamara and Gary Ward scored for the winners; Conor Laffin replied with a brace for Carew Park.

In Division 1B Regional Utd B and Athlunkard Villa went joint top after the sides played out a 1-1 draw on Tuesday. Smith Omojoefodun scored for United while Prince Bossman netted for Villa.
Caledonians and Caherdavin Celtic also ended 1-1, Cian Kileen and Brian Shorten respectively on target.
Mungret Reg move just behind the leaders following a 3-2 win over Newport. John McDonagh (2) and Rob Doyle scored the winning goals; Colin Coleman and an own goal accounted for the Newport scores.
Gary O'Reilly scored for Charleville but they fell 3-1 to Glenview Rvs for whom Sean Keane (2) and Conor McNamara obliged.
Pallagreen and Parkville ended level. Vinnie Ryan scored a brace for the home side; Brinn Holmes and Shane O'Brien replied for Parkville.

In Division 2B Aisling Annacotty D and Fairview Rgs C played out a 2-2 draw.

Youth Football kicked off on Thursday with Aisling Annacotty and Caherdavin Celtic playing out a 3-3 draw. Kane Connolly (2) and Brandon Kelly scored for Celtic.
Aisling Annacotty B went down 4-2 at home to Fairview Rgs for who Eoin Duff (2), Ethan O'Sullivan and Sean Ezekannagha netted.

The Under 17 Leagues kicked off on Tuesday and already Aisling gave warning with a big win over Newport. Chris Nwanko (2), Hugo O'Hanlon (2), Scott McEvoy, Jack Horan and Kieran Scully scored for the winners.
Goals from Tortoise Ide, Leonard Plunkett and Josh Shinners saw Fairview past Corbally Utd A and a goal from Conor McGuane saw Shelbourne to victory over Cappamore.
In Division Two Henry Ezomo scored all four Summerville Rvs goals in a win over Herbertstown for whom Paddy Bermingham replied.
Regional Utd ran up a big win over Corbally Utd B with Conor Brennan claiming five goals. Mark Moroney (2) and an own goal made up the winning tally.
Castle Rvs went down at home to Knockainey through goals from Eoin Cleary, Diarmuid Enright and Ethan Dorney while Kilfrush also scored three in an away win at Newport B.
Johnny Ryan scored for the home side; Oisin Enright, Ian Finn and Conor Finn netted for Kilfrush.