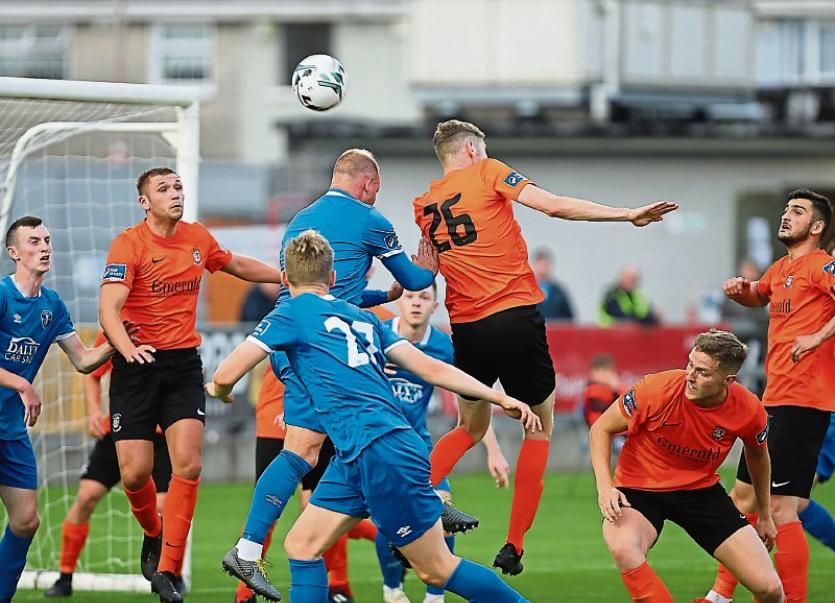 Above: Limerick's FC's Robbie Williams goes close with this header against Athlone Town on Friday night

LIMERICK FC boss Tommy Barrett says Saturday’s Extra.ie FAI Cup second round draw away to Premier Division Sligo Rovers is a good one for the Blues from a financial point of view.

Limerick, sixth in the First Division, travel to The Showgrounds to face Sligo, currently sitting in sixth spot in the Premier Division, for a big last 16 tie on Saturday, 8pm.

Commenting on the task next Saturday on the back of their 1-1 draw with Athlone Town in the First Division on Friday night, Barrett said: “From a financial point of view I think it is a good draw for us. They will get an attendance of 2,000-3,000 up there and we will get 35% of the gate.

“Is it better to get a 35% share of a gate of 3,000 people than 65% of 400 people? The maths on that is that it's probably better that we are playing Sligo away because I don't think we are going to get a big crowd here, so I think it is a good draw for us financially.

“Sligo are a good side obviously, but we will go up there and give it our best shot, that is all we can do.

“We just have to have a go. Obviously, we cannot afford to go all out, we need to be very defensive minded going up I would say going up there because they will pick you off.

“We just have to stay in the game as long as we can.

“Obviously they are massive favourites, a full-time professional squad where we have a part-time amateur squad, so it is a huge ask for us.”

Barrett again stressed the need for Limerick not to reduce the size of their budget mid-season in 2020 if they have a budget at their disposal.

Barrett said: “Whoever comes in and whoever is manager next year - I keep saying it - if you have nothing, fine, if you have no money, that's fine, you'll work with that.

“At least lads know they have no money and they can train three, four and five times a week, the problem is the last couple of years that we have started with a budget and we couldn't afford to pay it and that kills you because you lose all the players.

“It is like working in any job, if you are told you are not getting paid eventually you are going to be de-motivated.

“These lads have gone so long without being de-motivated, we all have, it has been excellent.”

Manager Barrett said he expected the lions share of the squad to remain with the club until the end of the season rather than opt to go back playing junior soccer before then.

“That will be up to the players themselves. In fairness to the lads most of them said they were going to stick it out and we'll see it through now. We have only three league games left now. The boys have been excellent all year. I went on record last week and publicly thanked them for the year.

“The last few weeks they have dropped off. I think is probably a bit of human nature. I'm kinda miffed about it myself but have I been de-motivated myself, I probably have if I'm being honest.

“That does not mean we are not trying. It is just that it does grate on you, things catch up on everyone and when you lose a couple of games in a row it is hard to motivate yourselves and the players, but, look, we have got two results last two weeks, so we are picking it back up.”