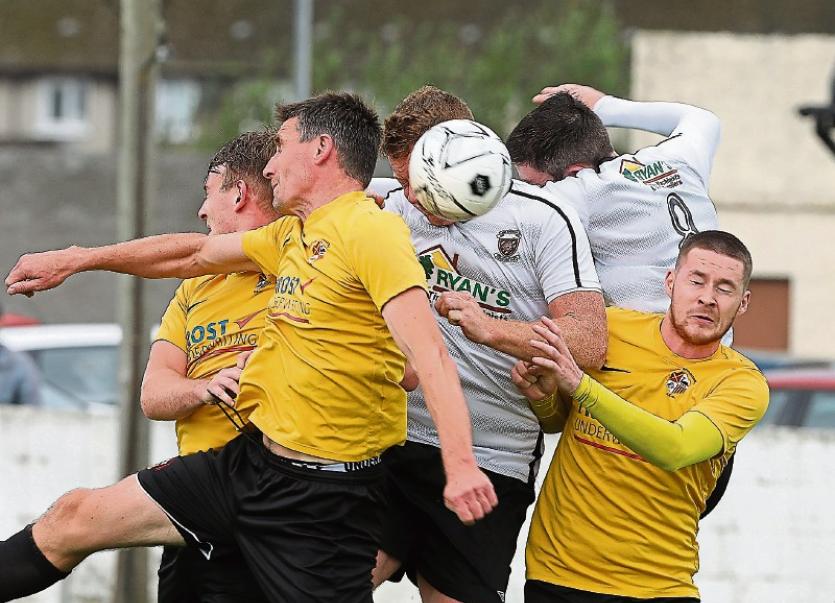 The Premier League third round games are scheduled for this evening with some interesting ties on offer. Joint leaders Fairview Rgs will face a tougher test than in their two previous encounters when they welcome Ballynanty Rvs to the Fairgreen.

Despite being less than impressive in their two opening games, Balla have shown their resilience and with a little more composure in front of goal they could prove formidable.

However, they meet a Fairview team in flying form with twelve goals in their first two games.

Fairview have signed well over the Summer and even at this early stage of the competition, are some people's tips to go all the way this season.

They have welcomed several former players back into the fold and three of them, Darragh Rainsford, Eddie Byrnes and Jason Lipper shared seven goals in their defeat of Prospect on Sunday.

Their defence has also been bolstered significantly with the addition of Mark Slattery and Dermot Fitzgerald who are settling into their new surroundings nicely.

Balla's defence will have a fight on their hands to halt Fairview's progress.

Joint leaders Regional Utd will have their good run tested when they host Champions Janesboro in Dooradoyle.

Tom O'Connell and Shane O'Donoghue had their hands full in close season with the loss of virtually a full team for a myriad of reasons.

It has been a hard slog but pulling in several last year’s youth side along with those who stuck with the Club, they have regrouped and two wins in their opening games has been encouraging.

However this evening they will get a tougher test when they host the current Champions who are still smarting from their opening day clipping by Pike Rvs.

They recovered to take the three points from their second game with Aisling but by their standards have yet to get things 100% right.

The addition of former Limerick goalkeeper Tommy Holland is a boost while the return to action of Steven Bradley is another big plus.

Regional were Boro's bogey side last season but it's hard to see the Champions slip up again so early in the season.

Following their stunning opening day win over Janesboro, Pike Rvs had to settle for a share of the spoils when they made the short trip to Geraldines when they needed a late penalty to avoid defeat.

On Thursday they welcome Kilmallock to Crossagalla where they will be favoured to add to their points tally.

The county side started with a draw against Balla but went down on Saturday to Nenagh. On their day Kilmallock are a real test but with the form Pike are showing you feel they will prove too strong.

Geraldines have started the season impressively chalking up a win and a draw in their two games. Most impressive was their draw with Pike on Sunday. The Dines have signed smartly in the close season, keeping the ethos of the club while adding some excellent players.

Next up they travel to take on Aisling in Annacotty. Mike Aherne's side have yet to get off the mark after a close season that has forced them to reshuffle the side.

It is a young side and it might take a couple of weeks to get into their stride. They will get no help from the Dines who will be determined to add to their points tally.

Prospect Priory will be Thursday's opposition and the Hyde Road club come into the tie with confidence at a low ebb following an 8-0 drubbing against Fairview on Sunday.

No doubt Daithi O'Donoghue will have worked on the side in training.

The final Premier League tie down for decision (Thursday) pits other newcomers Coonagh Utd against Nenagh. Coonagh picked up a point in their opener against Prospect and fell narrowly to Balla in their second game.

Nenagh on the other hand lost their opener to Geraldines but bounced back with a 1-0 win over Kilmallock.

Coonagh will have learned the hard way following their game with Balla how to manage games when in the lead. Enthusiasm needs to be replaced with cynicism at times. They possess a goal threat in a number of positions so will pick up their share of points.

I have yet to see Nenagh but after a bad season last year they are determined to right things this season and look to be going in the right direction. Don’t be surprised if this one finishes level.