Peamount extend So Hotels League lead with win over Limerick 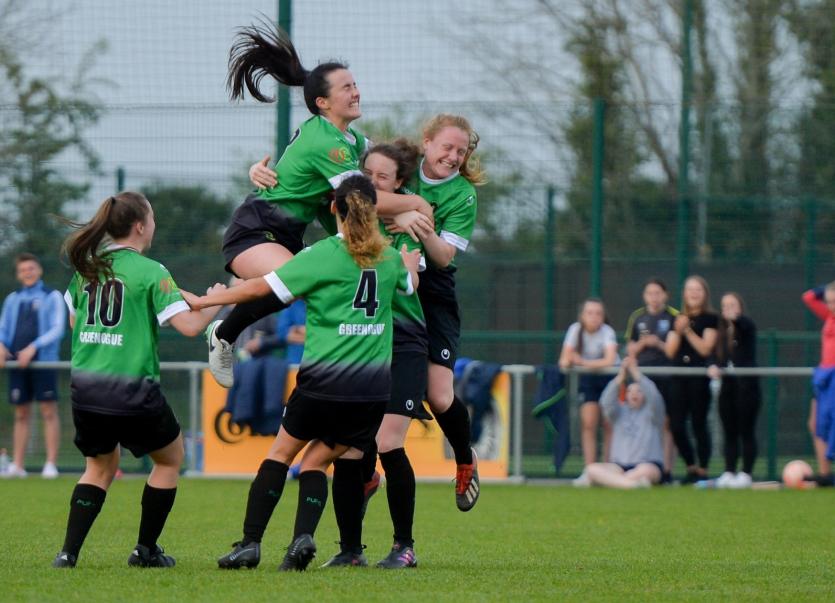 Title hopefuls Peamount extended their lead at the top of the Só Hotels Women's National League thanks to a comfortable seven-nil win over Limerick at a rain-swept Markets Field on Sunday afternoon.

A superbly taken hat-trick from the impressive Megan Smyth Lynch, a brace from substitute Louise Masterson, a first half goal from Aine O’Gorman and an own goal on the hour mark ensured the league leaders kept the pressure on the chasing pack.

The Dubliners enjoyed a bright start and took an early lead as the in-form Megan Smyth Lynch took full advantage of a well-positioned free kick to put her side ahead with less than two minutes on the clock.

Credit to Limerick, Dave Rooney’s young guns stuck to their game plan and made it difficult for Peamount as the more experienced side were looking to double their advantage in difficult conditions.

Just shy of the half-hour mark Peamount did eventually break down the resilient home side as Smyth Lynch doubled her sides’ tally with a one-touch finish after an inch perfect Aine O’Gorman cross got in behind the Limerick defence.

A minute later, the Peamount midfielder nearly had her hat trick but her effort struck the far post as Limerick goalkeeper Karen Connolly could only watch on.

With half-time fast approaching the Peamount winger turned from goalscorer to provider by curling a ball into the Limerick penalty box, following a dazzling run from deep, for Aine O’Gorman to cooly slot home to put three between the two sides.

As the torrential rain fell down in the second half, the goals began to pour in as Limerick failed to weather a determined Peamount storm.

It took the visitors just eight minutes to make it four-nil when Megan Smyth Lynch found herself in plenty of space at the edge of the penalty area to blast home and secure her well-deserved hat trick.

It went from bad to worse for Limerick on the hour mark as an own goal by Gillian McKenna made it five-nil, after the hosts failed to clear their lines when trying to play it out from the back.

James O’Callagan’s side continued to probe, with substitute Louise Masterson grabbing Peamount’s sixth goal of the game, a mere three minutes after her introduction.

The poor conditions didn’t deter the lively midfielder who took full advantage of a superb through ball from woman of the match, Smyth Lynch, to find the far corner against the tiring Shannonsiders.

A close-range effort from Masterson then made it seven-nil to the rampant away side with just under fifteen minutes to play – her second of the day.

Both sides took their feet off the peddle as the final whistle approached, with Peas securing a crucial three points ahead of the visit of league champions Wexford Youths to Greenogue next month.