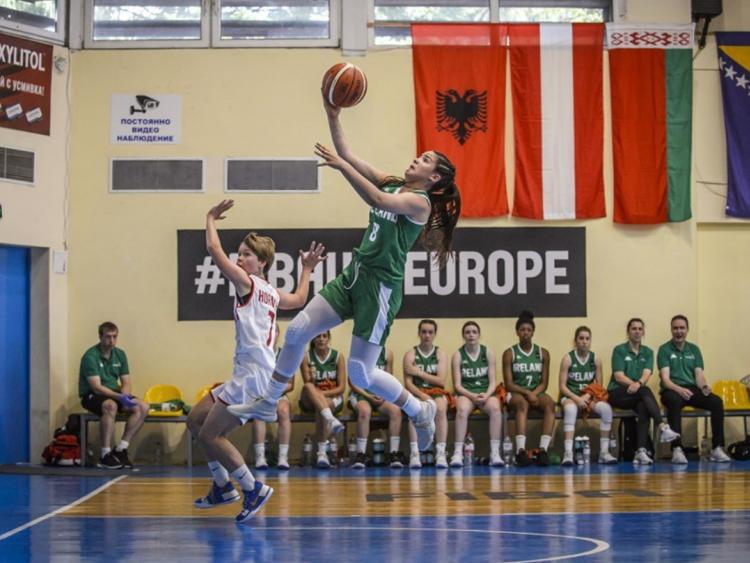 The Ireland U16 women’s team, including Limerick's Sophie Moore, face Great Britain in their fourth pool game today at 6:30pm Irish time at the FIBA U16 Women’s European Championships Division B in Sofia, Bulgaria.

Ireland come into the game with a record of two wins and one loss, defeating Austria and Albania while suffering a heart breaking last second loss to Portugal.
Ireland secured a ten-point win over Austria, 61-51, with big performances from captain Hazel Finn and Kara McCleane. In their second game they defeated winless Albania, 106-37, in a game where each player contributed on both ends of the court, especially Miah Ryan who scored 24 points in a fantastic effort. Hazel Finn also sat out that game due to a minor ankle injury suffered in the win over Austria.
Finn returned in their third game v Portugal and Ireland stormed to an early lead, holding Portugal to just five points in the first quarter. The game slowly fell out of Ireland’s hands as Portugal made a miraculous comeback and scored in the final second of the game to win by a single point, 67-68.

Great Britain come into the game on the back of one win and two losses in the group. They lost out 41-46 to Portugal in their first group game and went on to fall 58-61 to group favourites Belarus. They bounced back to defeat Albania 84-47 and will be looking to overtake Ireland in the group standings with a win.

Speaking on the events of the European Championships and looking ahead to the game, Ireland U16 women’s head coach Andy Gill stated, “The loss against Portugal was a bitter sweet pill to swallow but we should all see it as a demonstration that this team is capable of competing with both GB and Belarus. GB have had two very close games and I am sure it will be a hard fought and close encounter tomorrow. We will aim to channel our disappointment into achieving a positive outcome”