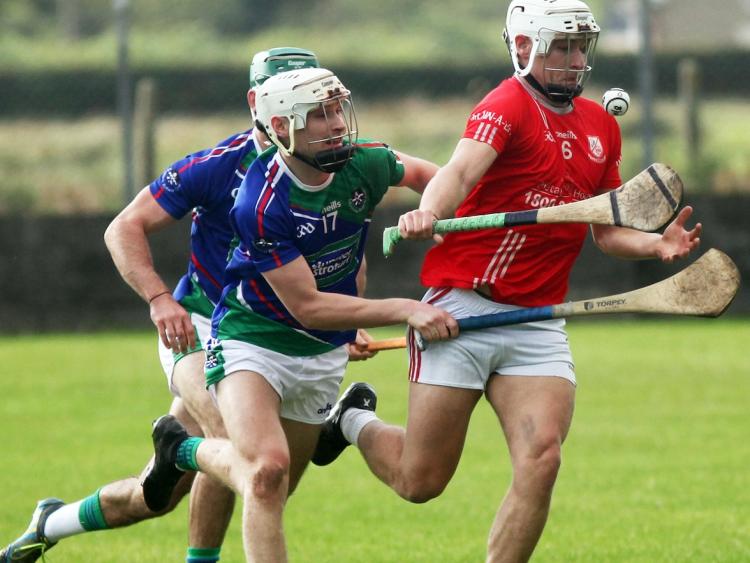 Action from Murroe-Boher and Monaleen in Group 2 this evening

Na Piarsaigh confirmed a spot in this season's Bon Secours Limerick Senior hurling championship quarter finals this evening with a 3-21 to 2-11 win over Adare in Mungret. However, the blue and whites will face a final round (defacto) semi final play off with Doon as just one point separates the sides in the race for a top two spot. Na Piarsaigh's inter county stars Kevin Downes (2) and Adrian Breen raised the green flags for the 2018 champions, with Charlie McCarthy and Brendan O'Connor netting for Adare in the opening half. Adare are not second from bottom with a final round tie against table toppers Patrickswell to come.

A late Dan Morrissey goal secured a crucial two points in Ahane’s bid to reach the knock-out stages of the Bon Secours Limerick Senior hurling championship thanks to a narrow 1-15 to 0-17 victory over Knockainey in Caherconlish.

The result ensures that winless Knockainey remain rooted to the bottom of Group 2 following the dramatic one point defeat to Ahane this afternoon.

Davy Givens’ side lead by two points (0-7 to 0-5) after 25 minutes before both teams took a well-deserved half-time break as the scores stood at nine points apiece.

The men in Black and white edged ahead early on in the second half but this evenly matched contest was set up for an intense finish in front of a healthy crowd at the wind-swept Caherconlish venue.

With ten minutes remaining Knockainey again edged out their East Limerick opponents but the Castleconnell men were to have the final say as Limerick star Dan Morrissey found the back of the net to make the difference.

Ahane’s victory kept their top two hopes alive ahead of their final group game against Murroe Boher, as Knockainey have it all to do against relegation rivals Garryspillane as both sides’ are set to battle to avoid the drop to the Limerick Premier Intermediate Hurling Championship in two weeks time.

Monaleen went back to the top of group two with a hard earned draw against rivals Murroe-Boher in Cappamore this evening. Amazingly this was Murroe-Boher's fourth draw in their four games. The men in blue and green could yet go through this championship unbeaten and still not earn a top two spot and County quarter final.