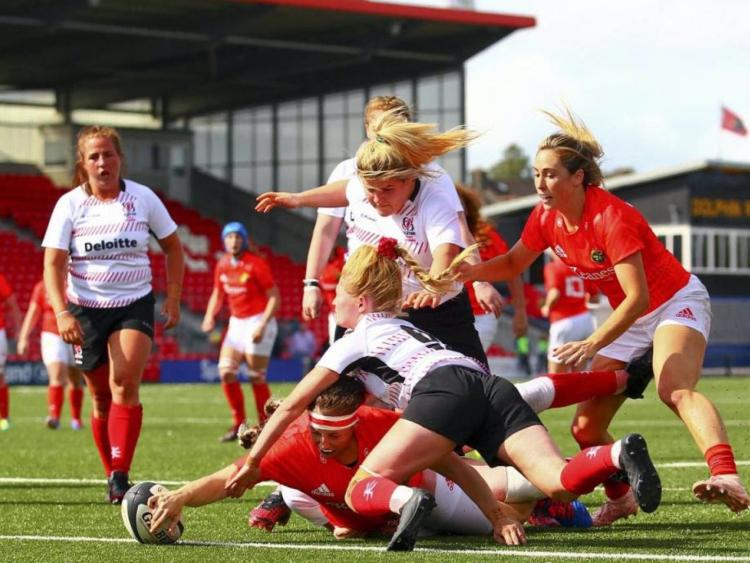 Leinster and Munster both notched big wins in round one of the 2019 IRFU Women’s Interprovincial Championship. Munster opened their account with a 38-12 win over Ulster at Irish Independent Park. The six-try salvo featured a brace of tries from Chloe Pearse and further efforts from Laura O’Mahony, Clodagh O’Halloran, Kate Sheehan and Niamh Kavanagh.

Ulster opened the scoring in the first minute of the game as Maeve Liston broke clear in midfield and angled her run to evade the cover. Fiona Tuite also crossed for Ulster in the first half, but Pearse was impressed with her side’s resolve.

“We never even got going and we found ourselves seven points behind” said the Munster co-captain. “But we trusted our process. We had our set piece and with the calibre of our backs, they’re always going to finish once you give them that platform.

“We did well to get back in the game and our defence at the start of the second half was really solid, so we just need to fine tune a few things before going up to Connacht next week.”

Munster were 19-12 clear at half time and secured the bonus point on the hour mark with Pearse’s second try.

“Objective achieved,” said Munster Head Coach Laura Guest. “It’s very close to being the best we could have looked for out of today. We lost Niamh Briggs to injury but that didn’t change our focus. We’re a squad. We’re a team. Players switched back onto their job as soon as she went off. Let’s hope it’s not too serious. It’s too early too tell.”

Defending champions Leinster also bagged six tries to beat Connacht 34-06 in Energia Park. It was a welcome return to action after a difficult year with injury for Ailsa Hughes who teed up the first try for Hannah O’Connor with a quick-tap penalty. The international scrum-half also finished a try of her own from the half-way line after a break from Sene Naoupu.

Connacht led 6-5 after 17 minutes thanks to penalties from Meabh Deely but the home side were back in front through Grace Miller and led 17-6 at half time.

Niamh Ni Dhroma scored Leinster’s fourth before substitute Meabh O'Brien ran in the home side’s fifth try from 75 metres. Michelle Claffey marked her return from ankle surgery with the final try of the game in the 80th minute.