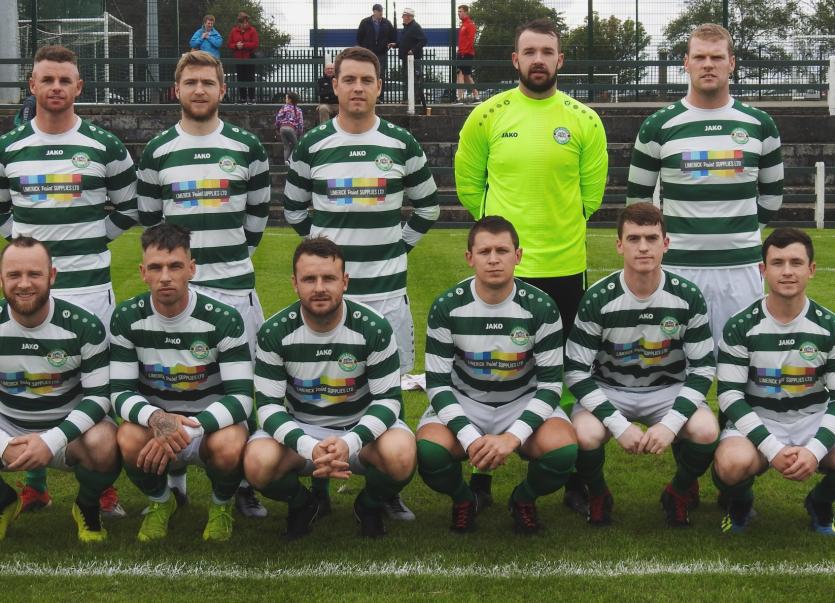 The Pike Rovers side who defeated Janesboro this evening

Pike Rovers 6 Janesboro 1
Champions Janesboro had their colours lowered at the Pike Club tonight when arch rivals Pike Rvs hit them for six in the opening game of the Premier League. Boro, showing a much changed side from last season, had no answer to the Hoops who led 2-0 at the break thanks to a Eoin Hanrahan double.

Our soccer coverage is brought to you by Limerick Junior Soccer.com: Click here for more

Mungret Reg 0 Fairview Rgs 4
The pre season hype surrounding Fairview did not disappoint their fans tonight as they opened their account with a 4-0 win at Mungret Reg.
A dazzling first half by the winners saw goals fly in by James Fitzgerald, Jason Lipper (2), and Ross Mann which proved enough.

Aisling Annacotty 1 Regional Utd 2
Two sides who have had to regroup over the Summer clashed in Annacotty when Regional took the points in a close game.
Mark McGrath gave Aisling the lead which was cancelled out by David Cowpar. Tommy Frawley popped up with a winner for the Dooradoyle side.

Coonagh Utd 2 Prospect Priory 2
Coonagh Utd picked up their first ever Premier point when they earned a share of the spoils with Prospect.
Things looked bad when Ian Maher and  Trevor Hogan gave the visitors a two goal lead but Coonagh recovered and goals from William Brick and Joey Sheehan levelled the tie.

Kilmallock 1 Ballynanty Rovers 1
A last minute goal from new signing Adrian Power gave Balla a last gasp equaliser and a share of the spoils in their opening game in Kilmallock.
Paul Moloney had given Kilmallock the lead and it looked like it might be enough to give the home side a memorable win but Power latched onto Stephen McNamara's clearance to score.

Nenagh AFC 1 Geraldines 2
Geraldines opened their campaign with a good win at Nenagh coming out tops in a three goal game.
Ian O'Donoghue gave 'Dines the lead but Bryan McGee levelled the tie for the home side.
Christy O'Neill delivered for Clifton Carey to clinch the points for the visitors.

Watch all the goals here: