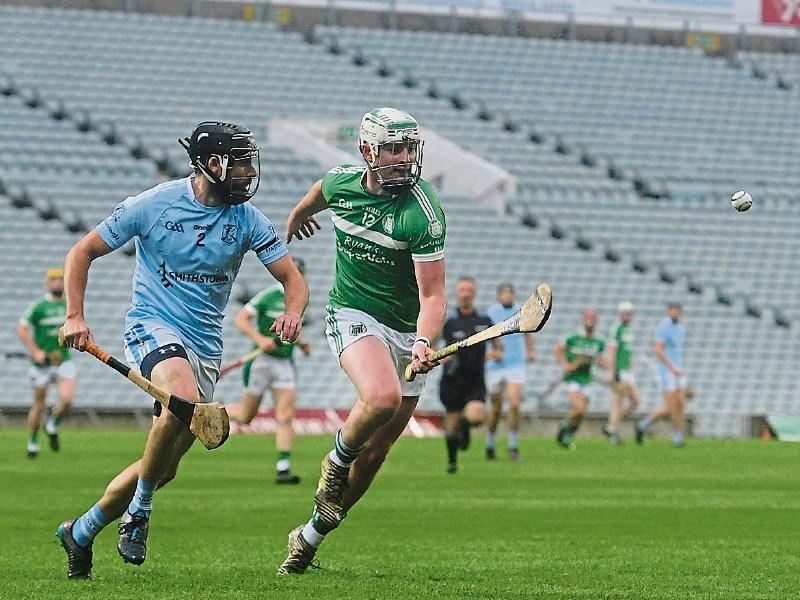 There is still a lot of hurling to be played in the Limerick championship but it has the look of inevitability about it as Na Piarsaigh and Patrickswell have set a course that others might find difficult to follow. Na Piarsaigh brushed Kilmallock aside in a game that was played with little if any intensity. Rarely have I seen a game that looked more like a challenge game than a very important championship game.

The Gaelic Grounds doesn’t do anything to help as the lack of atmosphere is chronic. In all of the years and games that I have seen Kilmallock play I cannot recall ever seeing six goals scored against them.

This was a poor effort by them as Na Piarsaigh had time, space and a bag full of opportunities from start to finish. There was a brief spell when Kilmallock looked like they could make life difficult but after sustaining some scores Na Piarsaigh took control again and won pulling up.

Some of the players that have served Kilmallock well for many years are no longer moving with the same fluidity of the past while some of the younger players have a fair bit to go to fill their shoes.

Na Piarsaigh were goal hungry and within thirty seconds of the start Peter Casey found the net and they never looked back. Now, while Na Piarsaigh won well they will know that some players never got to the pitch of the game.

Some of them coasted while others worked very hard. On the night they did what they had to do but they have room for improvement and players that are capable of making it.

After a difficult spell of injury it was good to see Adrian Breen get some game time nearing games end. He has worked very hard to get this far but as time progresses his contribution will be very valuable to Na Piarsaigh.

On the night Peter Casey was on fire, he ripped the Kilmallock defence apart but was also greatly assisted by some quality ball. Na Piarsaigh won well but their desire to play the perfect pass all the time might cause them problems down the line. Despite having lots of time and space in this contest it still broke down on a number of occasions and the prefect pass is great when it works out but dreadful when it breaks down.

Kilmallock lacked the bite we would normally associate with them. They stumbled and stuttered and never looked like they could challenge Na Piarsaigh in a meaningful way. Their backs were sliced open and that presented so many opportunities for Na Piarsaigh.

Peter Casey netted 2-6 and while Kilmallock tried a few different players on him all got the same result. Young Will Henn, who is making steady progress, had Na Piarsaigh’s third goal. He worked hard and I was surprised that he was taken off. Indeed there was a few more that could have gone before him. This player needed game time and with it he will improve further.

Kilmallock could only manage 1-3 in the second half whereas Na Piarsaigh landed 2-10. It was a frustrating evening for Kilmallock they were unable to deal with what Na Piarsaigh delivered and overall it has to have been one of their most disappointing evenings in the Limerick senior hurling championship.

Kilmallock are a proud club, a club that has produced so many great players and I am sure will again but right now they are finding it hard.

Not fielding a minor team tells its own story, they are not alone in this regard but if a town like Kilmallock cannot field a minor team then what hope have small rural parishes. The club as we currently know it is changing and will change even further in the years ahead.

Na Piarsaigh have a strong team, a team that will have an eye to going a long way in this years championship. This game showed us again what their forwards can do when given space and time and other teams will be wise to that.

Michael Ryan the former Tipperary manager is now in charge at Na Piarsaigh and is joined by coach Nigel O’Shaughnessy and in recent weeks by former Tipperary player and coach Declan Fanning.

Patrickswell made light work of South Liberties and with many of their young players showing development they are very much going in the right direction.

Byrnes, Lynch and Gillane are the foundation to Patrickswell and with players of this quality will make them really difficult to beat. I like the balance in Patrickswell.

They have a strong formation and are playing well as a unit. Most people feel the championship in Limerick is between Patrickswell and Na Piarsaigh but Doon who have closed the gap are still very much in the frame.

This championship could do with producing new players that will feature in the senior hurling panel players like Conor McSweeney and Brian Ryan of South Liberties have something to offer.

Also Jason Gillane of Patrickswell has potential. He has the hands and touch to make it at senior level but he will need to be in the system for a couple of years.

I have written before about Josh Ryan from Doon. Like the above named players a year on the panel would provide huge development for him.

Ryan has the makings of a full or centre forward and is now ready to take a step to development. Young players bring freshness and they help greatly in changing the mood of any team.

The most important thing for Limerick is that change happens and that players are ready and know what the system requires from them. There are others I have not mentioned but in the coming weeks I will be looking at this in more detail.

Away from the senior championship it was great to see Old Christians win against Patrickswell in the City Junior hurling championship.

They enjoyed a six point win under manger Ger Hegarty. I have always admired the great work this small club does. The people in the club love their hurling and over the years I have admired the work of Michael and Eugene Keogh, Bernie Hartigan and Richard Butler.

Many more people also have worked hard in keeping the Rathbane club alive and it shows their loyalty and commitment. This was a fine performance and players like Kevin Howard, Ken Byrnes and Dylan Blackhall were very much to the fore.

In the last couple of weeks Boher and Limerick GAA lost one of its finest. Patsy Laffan was a special man both on and off the field and he served his club with great honesty and humility.

He played until he was fifty five and on every occasion he always delivered. This man didn’t require strength and conditioning. To him it came natural from his work as a farmer. I saw him play so many games in Caherconlish.

He had a light frame but could whip the ball with speed and accuracy off the ground. I knew him from a young age and got a sense how much the GAA meant to him.

He was part of a team that had many fine hurlers, Tony Hickey, Sean Hickey, Pat McNamara, Joe McNamara and many more. They travelled from clubs around Limerick to pay their final respects to Patsy.

He left his mark in many ways but those I spoke remember him as an honest hurler that always played the ball. To his family, club and community I offer my sincere sympathies.