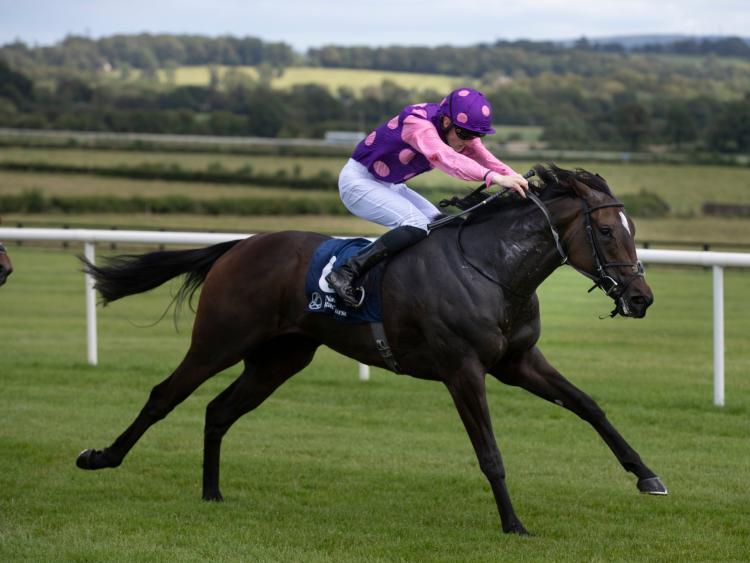 A big step back up in class is on the card to the Ken Condon-trained Celtic Beauty which landed the 5f maiden under high-flying Billy Lee at Naas on Bank Holiday Monday. Owned by David Kelly, she will head for the Group 2 Lowther Stakes at York later this month after scoring a two and a half-length success. She was narrowly beaten in the Group 3 Albany Stakes at Royal Ascot in June. Lee doubled up when partnering the Andy Oliver-trained Thou Art Peter to a cosy success in the 10f maiden. The 40/1 outsider won by all of six and a half lengths from 11/8 favourite Hazran.

Charles Byrnes was on the mark at Cork on Bank Holiday Monday where he landed the opportunity maiden hurdle with odds-on favourite Sky Marshall. Kevin Brouder had an easy time of it on the 4/6 favourite which scored by all of six lengths from his main market rival, the 7/2 chance Pike County. Donie McInerney rode out his claim when he teamed up with Nenagh trainer Ray Hackett to win the 2m3f handicap hurdle at with Nibblers Charm. Sent off an 11/1 chance, the six-year-old possibly won with a little more in hand than the three parts of a length winning margin might suggest.

At the corresponding meeting three years ago, Ballingarry trainer Charles Byrnes brought off a famous treble and a legendary gamble. One of those winners was Mr Smith and he reappeared at Roscommon on Tuesday evening to blow away the opposition in the 2m7f handicap hurdle. Carrying a mandatory penalty for his impressive win on the final day of the Galway festival, the strong 4/9 favourite began to race from early in the back straight on the final circuit for Kevin Brouder and burned away all of his opponents, scoring by 12 lengths from Messie.

Billy Lee was a winner again at Leopardstown on Thursday evening where he partnered Miss Jabeam to take the 6f handicap for Curragh trainer Aidan Howard. The 5/1 chance was a winner for the pair at the Curragh last month and she followed up in game fashion, challenging between horses inside the final furlong to beat Ducky Mallon by a neck. The three-year-old is owned by the Newtown Downs Syndicate. The good form which trainer Tony Martin struck at Galway last week has carried over and was seen with the victory of top-weight Drakensberg which completed a double for Lee in the 12f handicap. The 11/1 shot was registering his third win of the year having won twice at Dundalk. He improved gradually through the field and stayed on well inside the last furlong to beat 50/1 shot Ilikehim by three-parts-of-a-length.

Donie McInerney secured his first success as a fully-fledged professional at Sligo on Thursday when partnering Construct to an easy victory for John McConnell. Setting off to make all the running, McInerney never saw another rival aboard the 3/1 chance which is now two from two over hurdles as he recorded a three-length success in the rated novice hurdle. The Charles Byrnes-trained Give Battle took the 2m1f handicap hurdle under Kevin Brouder. A second winner of the week for the pair, the 11/8 favourite hit the front after the final flight and beat outsider Jazz Ranger by a length and three quarters.

Billy Lee was back in the winners’ enclosure at the Curragh on Friday night where the remarkable run of form being enjoyed Mathew Smith continued. The pair scored with Master Matt in the 5f handicap just 24 hours after the three-year-old ran at Leopardstown. The 7/1 co-favourite won by a length and a quarter from the Jack Davison-trained Miacomet.

Michael Hourigan shared winners with conditional riders Trevor Ryan and Darragh O'Keeffe at Kilbeggan on Saturday evening. Ryan partnered 20/1 chance Finding Joy to win the 2m4f handicap hurdle while O'Keeffe took the Kieran Kelly Memorial Beginners Chase on Humm Baby which was backed at bigger prices before scoring by two and three parts of a length from Make My Heart Fly.