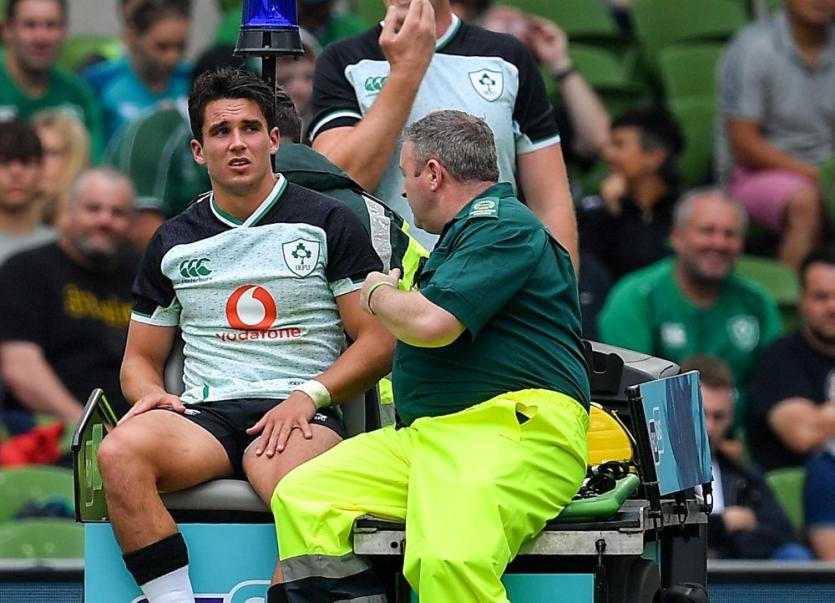 IRELAND head coach Joe Schmidt has issued an update on Joey Carbery's injury after the Munster out-half was forced off in Saturday's World Cup warm-up win over Italy at the Aviva Stadium.

Fly-half Carbery hurt his ankle in the 50th minute of the game while tackling Italy No 8 Jim Tuivaiti and left the field on a cart. He was immediately replaced by Jack Carty.

Speaking after the game, Ireland head coach Joe Schmidt said: "With Joey (Carbery) the good thing is that I can say there is no fracture because we have had him x-rayed, but there is a bit of swelling to that ankle, so we are probably going to have to let that go down a bit over the next 24-48 hours, then probably get that scanned or if we don't think it is too bad he will work away rehabbing in Portugal, working his way forward to England, if not England, hopefully Wales."

Asked if he felt the injury put Carbery's chances of playing in the World Cup in Japan at risk, Schmidt told RTE Radio 1s Saturday Sport: "It is too soon to say, but I don't think it is going to keep him out of the World Cup."

Prior to picking up his injury, 23-year-old Carbey had scored Ireland's first try against the Azzurri and also kicked two conversions in his first start since the win over USA in November last year.

Ireland defeated the Italians 29-10 with Munster winger Andrew Conway being awarded the Man of the Match accolade in a try-scoring display.

Munster full-back Mike Haley made his Irish debut off the bench in the second half.

The Rugby World Cup starts in Japan in just under six weeks' time.