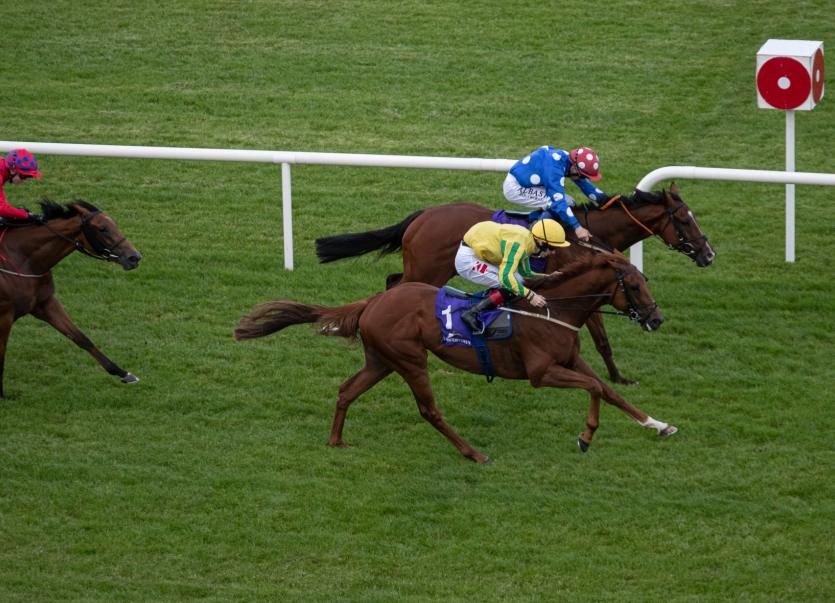 Franklyn with Limerick jockey Chris Hayes on board wins the Something Happens Handicap at Leopardstown. Photo: Patrick McCann/Racing Post

LIMERICK jockey Chris Hayes has a big week ahead as he will be on plenty of Dermot Weld's representatives at Galway and he warmed up for Ballybrit by guiding Franklyn to a narrow victory at Leopardstown.

The Aidan Howard-trained 7-4 favourite hit the front over a furlong out under his Shanagolden pilot in the Something Happens Handicap and dug very deep to secure a nose verdict of the fast-finishing Kafu.

Hayes will be looking to get among the winners at the bumper Galway Summer Festival which continues until Sunday afternoon.

Meanwhile, ten legendary riders with 75 Flat and Jumps champion titles between them have been assembled by Pat Smullen for his Champions Race for Cancer Trials Ireland at the Curragh on day two of the Longines Irish Champions Weekend on Sunday September 15.

“To have Ruby and AP riding against each other one more time will be exciting, and when you see Charlie and Paul there too, we really have what many consider four of the greatest Jumps riders of all time.” said Pat Smullen.

“Over a mile though, the Flat lads will fancy their chances! And we have signed up five brilliant Flat champions - Kieren is a hugely popular figure with racegoers here, Johnny, Richard, Joseph and Ted were world-class jockeys with whom I was lucky to share the weigh room.

"These fellas are heroes to so many people and I have to say I am humbled by the way they have without any hesitation thrown themselves into this project and are supporting this race. All of us want to make this a competitive race worth watching and so we will be sourcing horses over the next few weeks.

"Already we’ve had trainers and owners offering their support and that will be very important because, as well as this being about creating an exciting event over Longines Irish Champions Weekend, my priority is also about raising money for Cancer Trials Ireland, the leading Irish cancer research trials organisation.”