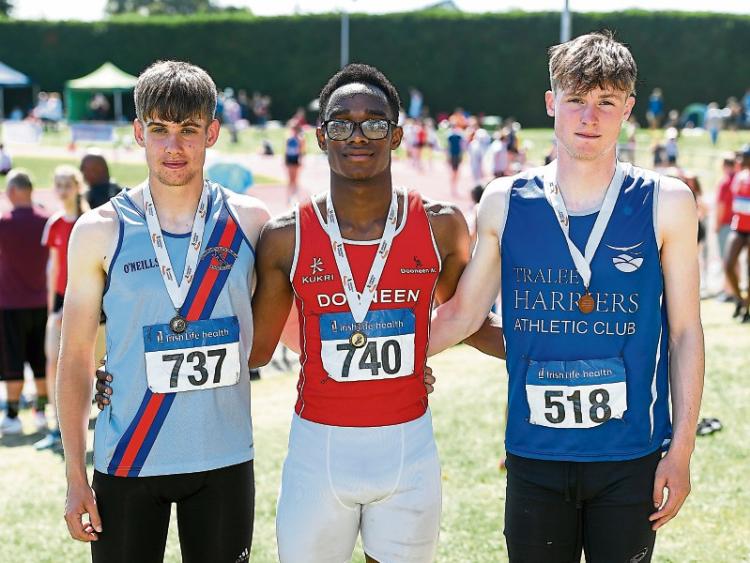 The penultimate weekend of the National Championships featured some great performances from a Limerick perspective.

An exciting Girls U15 4x100m relay saw a Dooneen side featuring Aimee Ryan, Emer Conroy, Debbie Lawal and Victoria Amiadamen just edge Leevale for the Gold medal 51.18 to 51.20. It was close all the way with Molly Quirke (just home from Irish College for the day) making a great start from the blocks, Debbie ran a strong second leg into Emer who scorched around the bend to Victoria Amiadamen who fought all the way to steal a great victory.

At U16, a Dooneen Girls side featuring Maria Campbell, Sarah Hosey, Sarah Butler, Debbie Lawal took Silver (behind Ratoath) in 52:36. Maria Campbell also featured in the U17 4x100m Dooneen side which came 4th.

In the Boys 4x100m relay a Dooneen U18 side featuring Tessy Lawal, Dior Lawal, Jeffrey Okwnegbe and Okeke Davis took Silver in 46.36.

At Juvenile B Dooneens Molly Quirke performed well to take 4th in the U15 Long Jump (4.32). Clubmate Alan McCutcheon took the U14 High Jump Gold clearing 1.33.

Around the Country and International

In a time of 1:59 Tom Blackburn (Moreabbey Milers) won the Munster Half Marathon League event in the Galtees.