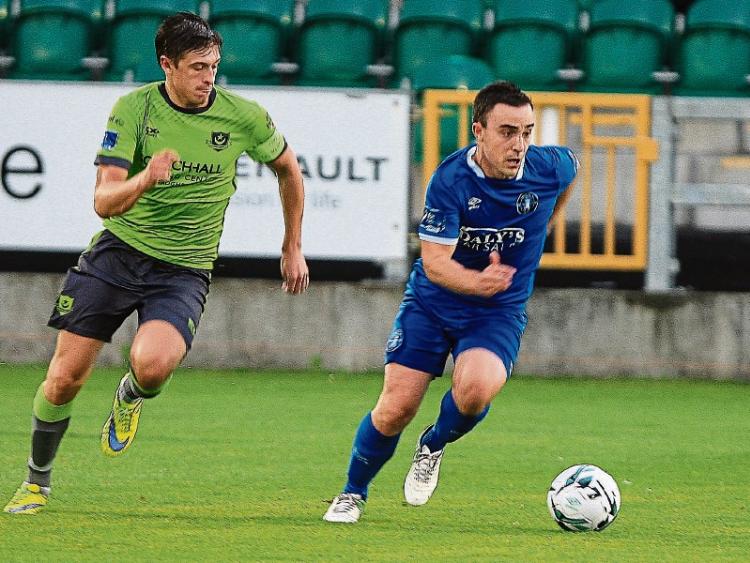 LIMERICK FC will look to re-ignite their fading promotion play-off hopes this Friday night when Cobh Ramblers visit the Markets Field for a crucial fixture in the SSE Airtricity League First Division, 7.45pm. Limerick currently sit in sixth place in the First Division table, a full seven points behind fourth-placed Cabinteely. There are now just six rounds of First Division fixtures to be played.

Friday night’s opponents Cobh sit one place and nine points behind Limerick in the table.

Tommy Barrett’s Limerick side suffered a disappointing 4-1 defeat to second-placed Drogheda Utd at the Markets Field before an official attendance of just 321 paying customers.

Limerick led at the break through a Clyde O’Connell header. However, ‘Drogs’ hit back with four second half goals to consign the Blues to their second home league defeat of the season.

Three of Limerick’s six remaining league fixtures will be at home, with the other three games on the road before the regular season ends in September.

Limerick FC manager Tommy Barrett admits his side are facing a tough task to get back into the promotion play-off race, but they are determined to keep fighting for every point.

Barrett said: “We’ll keep going, Drogheda play Cabinteely this week and if we beat Cobh it could be down to seven points – you never know. It will be really difficult for us (to finish in the top four), but we’ll keep plugging away”

While Barrett remained optimistic about his sides chances, he was also aware of the difficulty of task ahead. “We’d have to beat Cobh, Cabinteely and Wexford and we’d have to get something out Galway and Shelbourne away.”

Limerick FC will hope that the attendance increases on the disappointing turnout for the visit of Drogs last Friday night.

Barrett added: “You saw we played really well (v Drogheda). I’m disappointed with the crowd, particularly when you see Galway hosting Shelbourne in their last home match and they got 816, even though they are bottom of the league. We were in fourth place and played Longford and again against Drogheda we only got 300-400.”

While Limerick harbour slender hopes of getting back into the promotion play-off picture, the Shannonsiders also have an FAI Cup campaign to look forward to.

Limerick will travel to St Colman’s Park for a second round FAI Cup meeting with Munster Senior League side Cobh Wanderers on Friday, August 9 at 7pm.