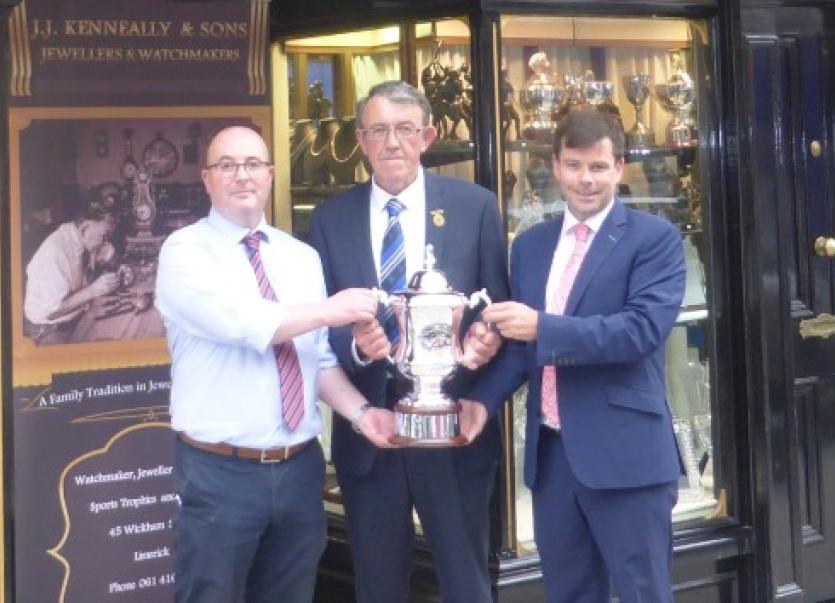 A LIMERICK GAA stalwart is to be remembered with a new Munster Hurling Championship trophy in his honour.

This week Tipperary were the first winners of the JJ Kenneally Perpetual Memorial Cup - the Munster U20 Hurling Championship trophy.

Earlier that afternoon, a new cup for this competition was presented by the family of the late JJ Kenneally by members of the Kenneally family to Munster GAA Chairman Liam Lenihan.

Known as the JJ Kenneally Perpetual Memorial Cup, the trophy will commemorate the memory of one of Limerick city’s most well-known jewellers and businessmen who passed away in April.

The Kenneally family have supplied Munster GAA with medals and trophies for many years and they have kindly donated this trophy in memory of JJ Kenneally, a former president of the St Patrick’s GAA Club in Limerick City.

“Munster GAA are delighted that the memory of JJ Kenneally will be commemorated in to the future following a lifetime of involvement with the Gaelic Athletic Association. We thank the Kenneally family for their contribution to the GAA over many years and in particular, for the donation of the new cup for the winners of the Munster U20 Hurling Championship," said Munster GAA chairman Liam Lenihan.

Clive Kenneally, speaking on behalf of the Kenneally family said “Our father JJ had a long association with the GAA, working with Limerick GAA through his membership of the Mackey Stand committee and closer to home with his beloved St Patricks GAA club. It’s a great honour for the Kenneally family to be associated with the Munster Council and the great competition that is the Munster U20 Hurling Championship”.