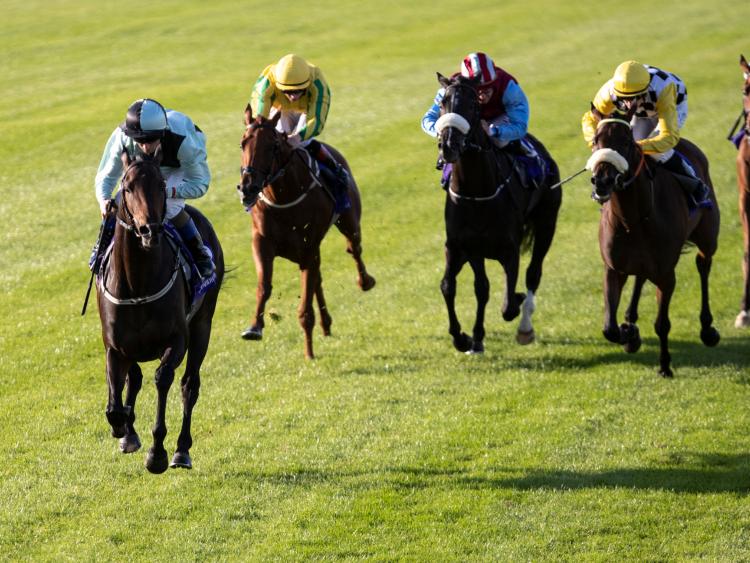 It was a wonderful week for Shanagolden jockey Chris Hayes who helped himself to five winners in the space of just four days. He teamed up with Fozzy Stack at Killarney on Monday as Chesapeake Shores won the Seamus Mulvaney Bookmakers Fillies Maiden at odds of 5-1. Hayes won the opening claiming race at Fairyhouse on Wednesday when Nobel Joshua showed a good attitude to get off the mark.  The three-year-old had some decent form over longer distances and was able to use his stamina to repel the late challenge of favourite Bar Room Bore.

Hayes swooped late down the outside on 8-1 shot Master Speaker to land the Tote Handicap at Killarney on Wednesday, while later that evening he was successful on Super Treat at Leopardstown, Tim Doyle's charge winning the Leopardstown Summer Sizzler Handicap.

Hayes' final winner of the week was the Aidan Howard-trained Franklyn who won the Tote Handicap at Killarney on Friday at odds of 11-1.

In other news, six-month statistics for the racing and breeding industry, released by Horse Racing Ireland (HRI), show significant rises in racecourse attendance, new owners entering the racing industry, a strong retention rate of those already involved in ownership, and a welcome rise in the turnover of on-course bookmakers. The half-year returns reveal a further increase in the number of horses-in-training in Ireland, a figure seen as a key indicator of the employment dividend provided by the racing and breeding industries.  Racecourse attendances increased by 9% year-on-year and brought with it a significant knock-on effect with on-course bookmakers enjoying a strong beginning to 2019, reversing recent trends to report a year-on-year increase in turnover of 11.5%. Tote betting remained down overall but like on-course bookmakers, Tote betting increased on track by 5.4%, while on-course SP shops saw a 9.7% increase in turnover. Active Owners were up by 8.5% year-on-year, with the owner retention rate (owners active in two consecutive years) in Irish racing hitting a 10-year high at 87%. New owner registrations were up by 9.5% year-on-year with 484 new owners registering with Horse Racing Ireland – the highest figure since 2008. This contributed to an increase in horses-in-training of 3.5% in the same period. The increase in ownership figures and in horses-in-training positively impacted field sizes and individual runners. Field sizes are seen as one of the drivers of betting turnover and Irish racing posted a healthy average field size of 11.6 runners per race for the first six months of 2019. Individual runners were up by 9% to 5,217 and individual runners that won prizemoney were up by 6%. Despite Brexit uncertainty, bloodstock sales returned a year-on-year increase, with modest gains of 1.3%.  Total race sponsorship continued to rise strongly, building on growth in 2018 to post another increase – of 12.8% - in the first half of the year.

HRI Chief Executive, Brian Kavanagh, commented: “It is very encouraging that figures for the first six months demonstrate increased participation rates across the ownership spectrum, more horses-in-training, and people coming to the races in bigger numbers and enjoying the wonderful product we have. We have worked hard on bringing new owners into Irish racing and then, with the racecourses, ensuring that the ownership experience was positive so that the retention rate of our ownership base was high. It is pleasing therefore to see the rates of new owners and owner tracking at ten-year highs. Ownership has been a key focus for Horse Racing Ireland and among the policy approaches has been increased prizemoney, increased opportunities for every strand of owner, the reduced costs and, this year, to ensure that prizemoney filters down to six places. Particular credit must go to our ownership team who work with racecourses on the ownership experience, run marketing support programmes for trainers, and organised the inaugural and hugely successful Trainers’ Open Morning last May.

“The increased ownership base, allied to that retention of the business, has a huge impact on racing in Ireland because increased horses-in-training and participation all over the country benefits trainers and breeders, and every facet of the industry.  The quality of young horses reared in Ireland and prepared for sales, together with the resilience of the market for Irish horses, brought strong figures at both National Hunt Store sales. It is always worth bearing in mind that, despite our size, we are the third biggest producers of thoroughbred foals in the world. Naturally, this means that we are significant exporters and 80% of those exports go to Britain. The challenges in terms of movement of animals, customs and tariffs, and potential protectionism that Brexit will visit upon us, could have detrimental consequences and we continue to work on behalf of the industry with our international racing colleagues, politicians and officials both in Ireland and in Brussels.”