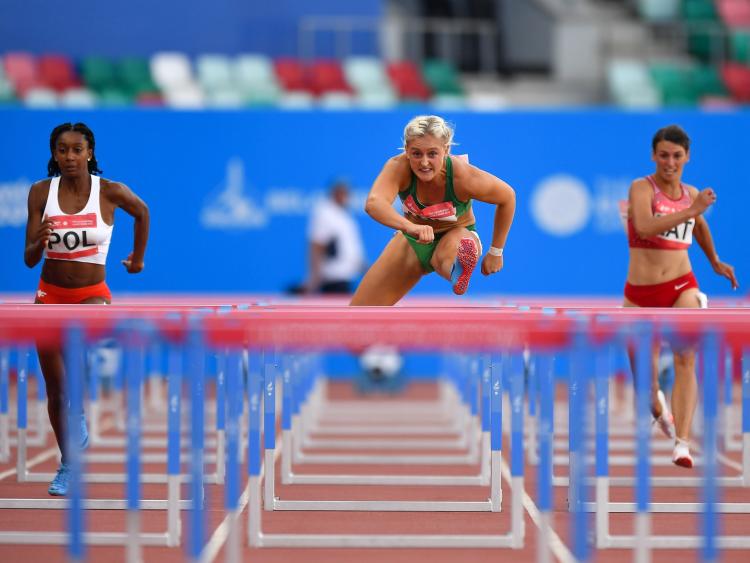 Sarah Lavin in action at the University Games

SARAH LAVIN feels like she is in round two of her career path but, crucially, she’s enjoying every step of the journey. It wasn’t always the case. Having dealt with the weight of expectation and pressure since running competitively for the first time – and winning – at under nine level, Lavin has suffered the slings and arrows of outrageous sporting fortune across the past few years.

In 2013, she looked like a sprint hurdler simply destined for the big time. She was a European U-20 silver medallist, Irish U-20 record holder and, because she was faster than Derval O'Rourke at the same age, comparisons between the two flew.

Adidas swooped in for a deal, she was one of only four female junior athletes worldwide to be chosen, and it seemed like the planets would align once the step up to adult ranks was made.

When the good times came her way – and they came quite often - the Limerick native never got carried away but instead found that she became more obsessive about the sport in an attempt to keep the successes coming. That, allied to injury, disrupted her career. In truth, it disrupted her life.

At the 2014 European finals in Zurich, 2014, Lavin travelled to her first major senior championship in absolutely splendid form having clocked a personal best of 13.23 earlier that summer.

Last place. The fall was brutal.

By the time 2016 swung around it looked like it was curtains for her. She was in decline. Burnt out.

“Looking back there were lots of tears,” she says.

“I was dealing with pressure from the age of nine. I have a great coach in Noelle Morrissey and a rock-solid family, but from a structural viewpoint there was a lack of a mentor, someone to tell me and others representing Ireland what we were doing wrong.

“You have no idea how hard I trained but as I went and transitioned from junior to senior ranks it just didn’t happen for me.

“It made sense at the time. I was clinical about my diet, 100 per cent on my sleep – everything revolved around athletics because it was all I wanted to do," she says.

Looking back now she says she pushed her body to breaking point. Her weight dropped to 57kg, and it didn’t suit her. She wanted to be in race shape all of the time.

She over-worked but felt under-cooked. Her body changed and she lacked the zip that had helped her make her name.

The successes of 2013 when she landed Junior Track and Field European Championships in the 100m hurdles, seemed light years away.

So too were the IAAF World Junior Championships in 2012 and the bronze she took home from the 2011 European Youth Olympics.

As she stepped into her 20s she wondered what was next.

“I was studying physiotherapy at UCD and one adult said to me; “What sort of a physio will you make when you are always injured?”

“I couldn’t believe stuff like that being said. My fire had been bright but I could see it was burning out.”

She took some time to gather her thoughts, leaned on her parents, and her coach.

Deep down, however, the solution lay within.

“When all was said and done, and when I sat back to try and sort myself out there was the realisation that I had talent,” she says.

“It was like, all of this may seem to be slipping away from me, but the bottom line is I have a talent and it is still there.

“I suppose I started trusting myself and listening to my body. And those closest to me. Like, my parents were always on to me to enjoy college and let my hair down a little but if anything I had trained even harder.

"But I wasn't the first junior to burn out and make mistakes and even now I feel that while we are very successful at underage level we are not transferring that success to the senior international stage.

“A mentor is badly needed in this regard because the transition is hard and we all make the same mistakes over and over again – I would like someone to ask why is that?"

She is back on track now, currently the Irish Junior record holder in both the 60m hurdles (8.36) and the 100m hurdles (13.34), breaking the previous records held by European Outdoor silver medallist Derval O’Rourke.

And the comparisons to Derval have thankfully stopped.

“I was 13 years younger than Derval when those comparisons started,” she smiles. “That’s how ridiculous they were.”

At the weekend Lavin finished fourth at the World University Games and O’Rourke was one of the first to make contact.

“Derval contacted me saying how great it was to be in the top four of any worldwide competition and that’s how I see it too,” Lavin adds.

“The next step now is the Irish Life Health National Finals at the end of this month. They are huge in terms of me qualifying for Tokyo and even though I don’t want to put any more pressure on myself, every athlete at this level wants to be at the Olympics and they are telling you a fib if they say they don’t.

“The Irish Life Health event is crucial for me and a chance to see if I can accumulate additional points in trying to qualify for 2020.”

It’s been some journey back from the brink for the 25 year-old. A journey that is nowhere near ending.