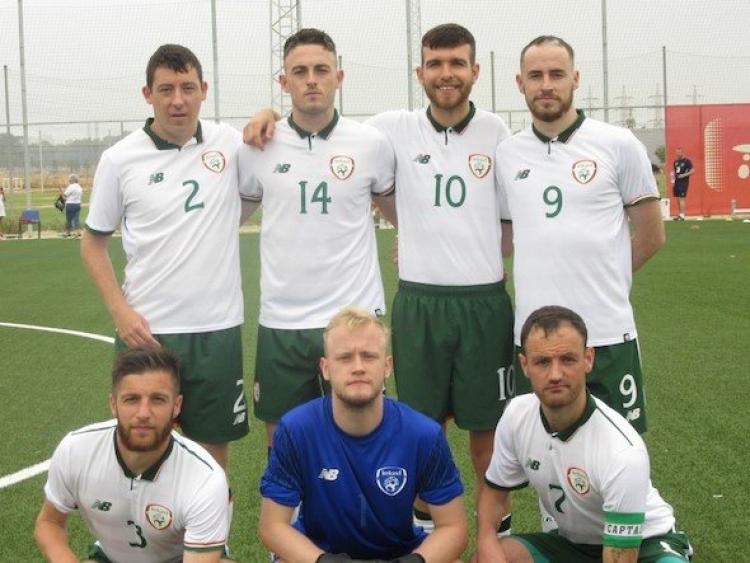 The Ireland side who defeated Canada

Limerick's Aaron Tier has helped Ireland to a top 10 finish at the CP World Cup. A brace from Dillon Sheridan and a goal from Carrick Rovers man, Joe Markey, completed the turnaround as Paul Breen’s side came from behind to defeat Canada 3-1.

From FAI.ie - Following the disappointment of failing to qualify from the group, Breen set his players the challenge of finishing the tournament on a high and they go into their final game on Thursday against Germany in a 9th place play-off.

After beating Japan 3-0 on Sunday, Ireland faced a Canadian team who had swept aside the hosts Spain by the same margin.

And it was Canada who drew first blood in the game when Samuel Charron gave them the lead midway through the first half.

They held on to that lead until the break but two minutes into the second half Cherry Orchard striker Sheridan netted his sixth of the tournament from a free kick. On 55 minutes Sheridan took that tally to seven when he converted from an excellent passage of play from Ireland and the win was topped off by defender Markey who scored his first of the World Cup.

Speaking afterwards, Ireland Head Coach Paul Breen said: “It was a really tough game against Canada and they made it difficult for us despite us having most of the possession.

"In the second half our game plan kicked in and that’s where we got the equaliser and then went on to score two more, but they were towards the end of the game which tells you how hard Canada made it.

“It’s another two goals from Dillon (Sheridan). He didn’t come into the tournament at his fittest and yet he’s been excellent for us which only goes to show how good he really he is. I’m pleased for him.”

Ranked 21st in the world, Germany will present a stern test for Ireland on Thursday and Breen warned about the Germans’ emerging talent. He added: “The ranking doesn’t reflect how good Germany are. They are a very good team and we played them in the European Championships and they are very organised. We know it will be a tough game and one we’re looking for to.”