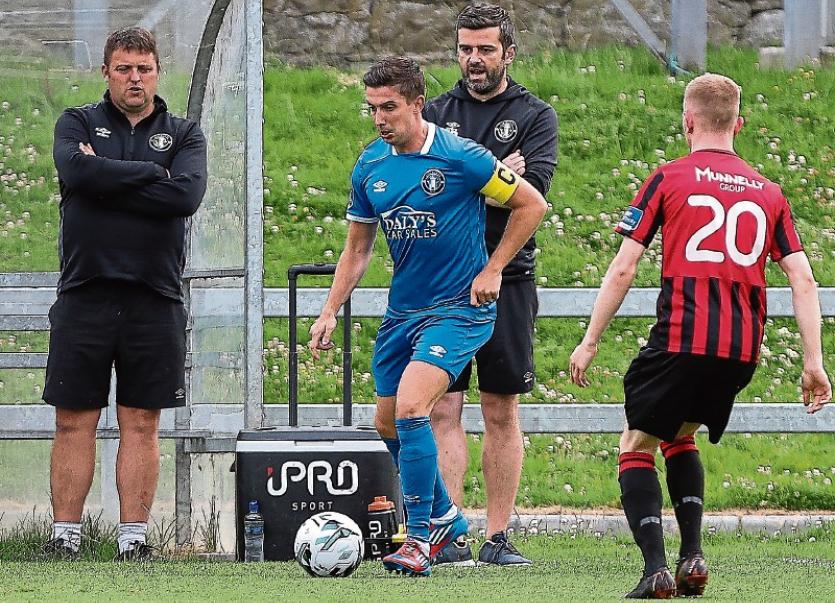 Under the watchful eye of his manager, Tommy Barrett, Limerick FC's captain Shaun Kelly takes on the Longford defence

LIMERICK FC TRAVEL to the seaside to tackle Bray Wanderers on Friday night as they look to hang onto the sides in the playoff positions. Tommy Barrett’s charges have overachieved considerably this season, given both the resources at hand and the turmoil off the field. They sit just three points off the top four.

‘The Blues’ will make the familiar trip up the M7, but in an unfamiliar state. For what is potentially the first time in the club’s history, Limerick will possess a fully amateur squad, after the last professional at the club, Tommy Holland, departed last week.

With no professionals left on their books, it means that the PFAI can have little to no involvement in Limerick’s affairs, as they have done in previous years when trouble has arisen.

But while they may not be professional on their deals, they certainly are professional in terms of their performances and their manager will be hoping that continues this week, as their slim playoff hopes remain for now.

Into the third series of games, these teams have faced off twice already, with Bray and Limerick claiming a win apiece.

Joe Doyle and Paul Keegan scored the goals that handed the Wicklow club all three points back in March, while a late Shaun Kelly strike won the day for Limerick only two months ago.

Despite recent departures, Limerick will go into this game with a clean bill of health after Shaun Kelly overcame an illness to set up Kieran Hanlon in their 3-1 win over Longford last Friday night.

Goals are still tricky for them to come by, as their 22-goal tally is the third-lowest in the division – only behind Galway (20) and basement side Wexford (16). However, they have been able to rely on their sturdy defence to land them points.

Kick-off at the Carlisle Grounds in scheduled for 7.45pm.