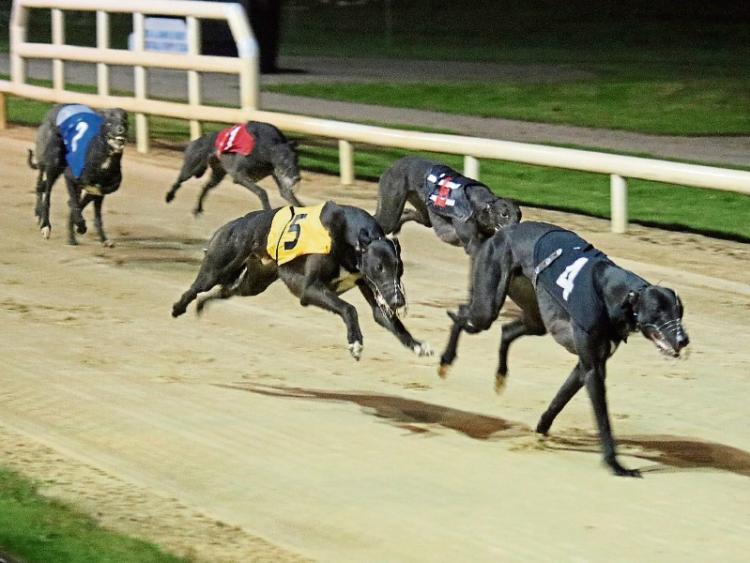 THERE were two finals in Limerick Greyhound Stadium last Saturday night. Myles Cummins won with Snuggie Kevi win the Limerick and Clare GOBA A56 525 final. The winner was a length and a quarter clear in 29.51 Beaten into second was Doon’s Patrick and Aoife Coffey with Carrigmore Puma.

There was also a final win for Michael Ryan. His Tullovin Sky had a time of 28.96 for the 525. The winner was a length clear on the line. Second was Martin McCormack with Dairyhill Croft.

Elsewhere on the card there was an A6/A7 Maiden 525 win for Roscrea Tom for Christopher Delaney. The winning time was 29.36. Two and a half lengths back in second was Roches Point for the Buckley-Roche syndicate.

Bill Clack won an A5 525 with Cabriol Tompkins. The winner was three quarters of a length clear on the winning line. Second was Gurtnacrehy Zoro for James Kelly.

There was an A5 525 win for Michael O’Grady with Take Control. The winner’s time was 29.01. Second, three and three quarters length back, was Bound Tobe Mine for Christine Taylor.

John Murphy had Cherrygrove Una as an A4 525 winner. In 29.47 the winner was three quarters of a length clear on the line. Second was Jayne Donlon with Lissycasey Pete.

The final race on Saturday was an A3 525. Victory, in 28.85, went to Double Busy for the Ducking and Diving syndicate. Beaten five and a quarter lengths into second was Tullovin Nellie for Helen Sheahan.

There was an 11 racecard on Thursday.

The opening A3 525 was won in 29.52 by Ballinulty Black for Michael O’Brien. Half a length back in second was Same Over Pogba for James and Kieran Lowe of Charleville.

There was an A4 525 win for Newcastle West’s Patrick Leahy with Kantoher Lass. The Mortimer Kennedy trained winner just won on the line in 29.37.

Anna Carey of Cooraclare, west Clare won an A5 525 with Gower Glory. The winner’s time was 29.28. Just beaten into second was Superior Quivers for Thomas Cummins of Oola and trainer John Nash.

Another Clare winner was Breda Casey of Newmarket on Fergus. Snuggie Bonnie won an A3 525 in 28.67. Three lengths back in second was Caulry River for Mary Ellens Gang syndicate of Nenagh.

PJ Ryan, Newport, won an A7 525 with Garryglass Peppa. The winner had three quarters of a length to spare in 29.93. Second was Clarina Hop for Donie Quinn of Clarina.

Another Tipperary winner was Peader O’Dwyer of Borrisokane. His Some Dinger won an A6 525 in 29.37. The winning margin was two and a half lengths. Seocnd was Honeypound Maxi for Michael Carmody of Croom.

An A3 525 was won in 29.01 and by two lengths by O Garney Rio. The winner is owned and trained by Bernard and Helen Coffey in Sixmilebridge. Second was Finnure Storm for trainer Denis O’Malley and the Finnure Storm syndicate.

Sean Mulcahy of Nenagh had Greenisle Athena as an A4 525 winner. The wining time of 29.19 was good enough for a four lengths win. Second was Mohane Zara for Cormac Davern of Bruff.

Doon’s Joe Shanahan won with Sprout Alley in an A5 525. The winner’s time was 29.29. Three lengths back in second was Kilmallock’s Breeda and Kayla McAuliffe with Drombeg Dancer.

There was an A4 525 win for Beron Magoo. Trained by PJ Ryan and owned by Terry Roberts and Paul Blamires of O’Briens Bridge, the winner’s time was 29.47. Second was Ballykildea Don for William and Donagh Walsh of Killaloe.

The final race of the night was a sprint – won in 19.04. The 350 was won by Optimistic Jack for Trevor O’Connell of Abbeydorney. A length and a half back in second was Mohane Vicky for Cormac Davern of Bruff.