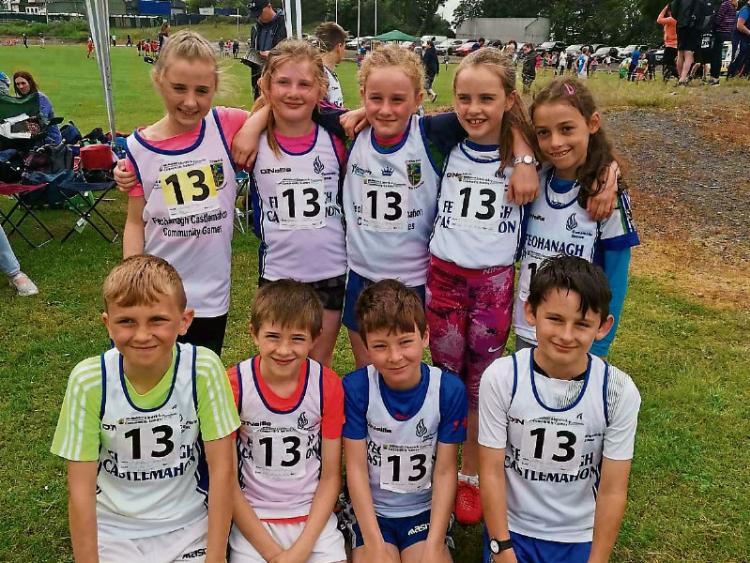 Tullamore was the venue for the National Juvenile children’s games over the weekend. This a competition where the combined scores of two athletes in a given event are added up and combined.

Dooneen AC athletes had qualified for a number of these events. Kate Cantwell and Eilbhe Cunneen came 4th in the U9 turbo javelin. Ellen Goggin and Eilis Ni Neill competed in the U10 500m race and came 11th overall.

In the U11, Destiny Lawel and Lily McMahon won the 60m pairs, Destiny and Emma Pethos won silver in the 600m, Lily and Sarah Williams were 5th in the long jump, Emer Purtill and Aisling were 8th in the turbo javelin. The U11 girls relay team came first, the U12 girls were 5th and the U13 team reached the final coming 4th overall.

U12 and U13 track and field finals

In the U12 events, Meabh Purtill of Dooneen competed in long jump, shot put and 60m finals achieving a bronze medal in the long jump. Evan Boland of Limerick AC was 5th in the 600m final, Rosie Hickey was 4th in the girls’ 600m final and Sarah O’Halloran was 8th. Aoife Grimes of Limerick AC won the long jump whilst Sarah Frawley of St Mary’s was 11th overall. Orla O’Shaughnessy was 6th in the U13 high jump. Vivienne Amaeze reached the 60m final and was 5th overall in the 600m race.

Well done to Jack O’Connor of Dooneen and Laura Frawley of St Mary’s Limerick on being selected for the Irish Schools team for the upcoming International track and field event in Swansea in July.

An Brú hosted their annual 5 mile race series in Bruff at the weekend. The event saw nearly 100 runners take part.

The race was won by Declan Moore of Bilboa AC, followed by PJ Carey and John Paul McCarthy of Kilmallock AC. Dymphna Ryan of Dundrum AC won the women’s race followed by Niamh O’Sullivan of An Ríocht and Miriam Byrne in third.

Munster B Track and Field finals and Pentathlon

Ennis was the venue for these two events held together on Sunday.

Jake Barclay and Robert Lynch of Dooneen competed in a number of U9 events including turbo javelin, sprints and 300m races.

An Brú had Mia O’Riordan running in the 300m. Robert McCutcheon of Dooneen, Alex Smiechowski and Diarmuid Adams of An Brú took part in all the U10 events and Clodagh Mulcahy of Sun Hill Harriers ran in the 500m race.

The U11 athletes included Aisling O’Sullivan of Dooneen who competed in the pentathlon achieving 6th place overall. Also competing from An Brú was Eoghan Murnane, Catherine McCutcheon and Niamh Hynes who competed in sprints, long jump and 600m events.

Ivana O’Carroll and Eimear Ryan of Dooneen AC competed doing very well in the U12 80m sprints as well as shot put and long jump.

Munachi Iefdi, Ryan Moloney and Eoin Adams of An Brú also competed in the U12 events. Robert Joy O’Regan of Sunhill Harriers won a bronze medal in the U12 pentathlon. Freya Wiegand of Dooneen AC competed in 3 of the U13 events – 80m, high jump and long jump. Natasha Smiechowski of An Brú did well in the shot put.

The U14 boys and girls were represented by Sarah O’Sullivan, Ross O’Carroll and Alan McCutcheon – all these athletes won medals in their events including sprints, high jump and long jump. Also in the medals was Molly Quirke who won the long jump and was 2rd in the 100m final.