Opinion: Scenes in Limerick so different to Croke Park 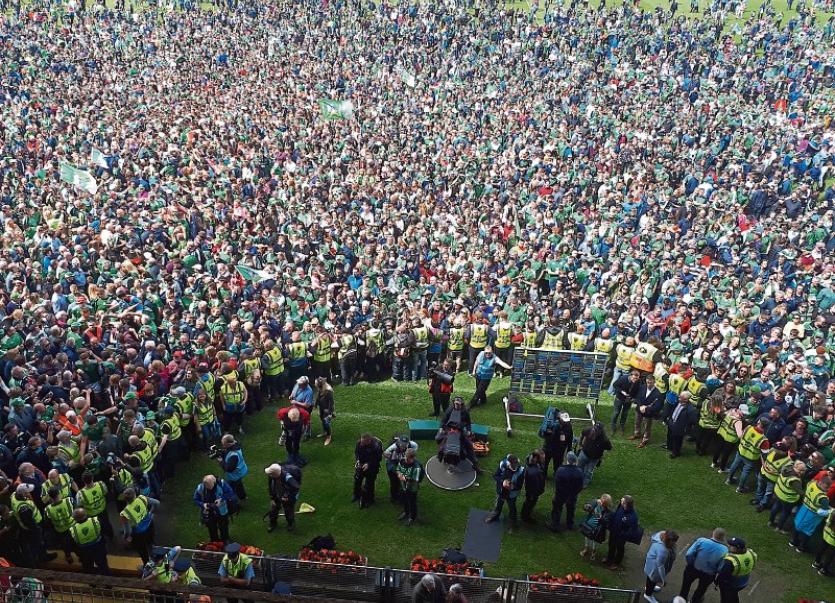 THE explosion of Limerick hurling fans out onto the playing pitch at full-time in Sunday’s Munster senior hurling final at the LIT Gaelic Grounds was in contrast to the scenes at full-time in the Leinster decider in Croke Park a few hours later.

The thousands of green clad Limerick fans swarmed onto the pitch, delirious with excitement at the achievement of the county’s hurlers in claiming the scalp of fierce rivals Tipperary in such a convincing manner.

A sea of green engulfed the playing surface. Supporters greeted and hugged players, united in a moment of achievement, bonded by their shared identity.

Young Limerick fans, decked out in the county colours, several carrying hurleys, made a B-line for their heroes in the hope of getting an autograph or snatching a ‘selfie’ before the Cup presentation.

The players duly obliged the young supporters with a moment of their time, no doubt reminded of a time not too many years ago when they swarmed onto the pitch to get their jersey signed by the likes of Carey, Kirby, McDonagh, Foley and Moran.

Precious boyhood and girlhood memories. Inspiring a future generation of inter-county hurlers. Leaving the Gaelic Grounds some two hours later, talking a walk across the pitch on the way out, one was struck by the excellent condition of the playing surface.

Indeed, the venue will host an All-Ireland football qualifier this Saturday between Mayo and Galway, just six days after the Munster hurling final. No concerns with the pitch whatsoever.

The influx of supporters on Sunday had no obvious impact on the grass. Thankfully, there were no reported injuries to any of those fans who had swarmed onto the pitch at full-time to acclaim their heroes.

Similar scenes to those at the Gaelic Grounds on Sunday have been commonplace at Semple Stadium too over the years.

Youngsters with hurleys ‘pucking around’ at full-time in games, getting the chance to hurl on the GAAs finest stadiums. They might never get to play a competitive fixture in these venues in years to come, but they can all boast to their friends when they return to school that they hurled in the Gaelic Grounds on Semple Stadium.

They were there too when Declan Hannon hoisted the Munster Cup aloft, much more enjoyable when you are watching the scene from in front of the Limerick captain that significantly further away in the uncovered stand or on the terraces.

There are those who will say that pitch invasions deny the players who have won titles to share in a precious moment. But that can be done in the sanctuary of the dressing room afterwards. The players get the chance to come together then and celebrate their achievements.

Pitch invasions at full-time can be tough on losing players, of course as they try to come to terms with defeat. But all teams have their day in the sun at some stage.

The scenes at the Gaelic Grounds on Sunday were very different to Croke Park when Wexford defeated Kilkenny.

Fans were unable to gain access to the pitch at GAA HQ as has been the case for several seasons now.

The players got to celebrate with each other at full time, but Wexford hurling supporters young and old didn’t get the chance to congratulate their heroes.

No autographs on the pitch, no selfies. Same level of fixtures but very different outlooks.