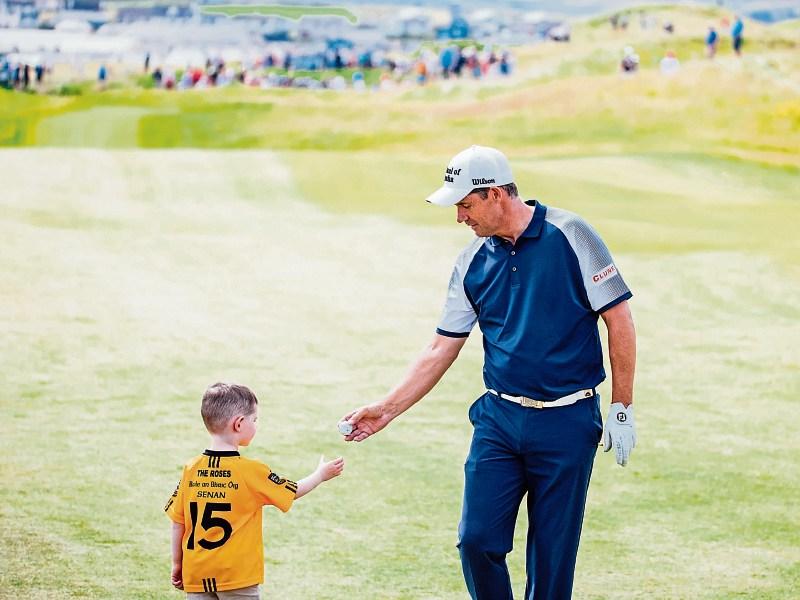 Padraig Harrington pictured on the Pro - Am day of the European Tour Irish Open in Lahinch Golf Club on Wednesday. Pic. Brian Arthur

WELL, after all of the hard work preparing the course and the village, the Irish Open at Lahinch began at cock crow this Thursday morning. Here's hoping for some brilliant weather over the weekend and good crowds that will create a special ‘Lahinch Atmosphere’.

If the tournament turns out to be half as good as The Amateur Championship held at Portmarnock last week, it will be an unqualified success and everyone will have had a great time.

The intention is that there will be a festive atmosphere off the course and some cutthroat competition on it that will generate as many smiling faces as were seen at Portmarnock when James Sugrue (Mallow) became only the second Munster man ever (James Bruen being the other in 1946) to win the (British) Amateur Championship and with it kudos that will last him into 'immortality' and guaranteed starting slots in the upcoming Open Championship at Portrush, Walker Cup and US Amateur in September, the US Open (Winged Foot, New York) and Masters Tournaments next year.

There was a time when The Amateur was more important than The Open and by far the most difficult championship to win worldwide. Don't take my word for it, we have the winner of the Impregnable Quadrilateral, Bobby Jones to thank for that insight.

In his career, Jones won four US Opens, three Open Championships, five US Amateurs and only one (British) Amateur, in the year he completed what only later became known as his Grand Slam, he admitted that it was the last named that consistently gave him the most grief and disappointment.

Being at Portmarnock for The Amateur final was the most enjoyable day I have spent on a golf course without swinging a club for a long time.

A magnificent, sunny day; a fabulous test of golf played to the highest quality on an immaculately maintained golf course; greens like glass; a huge crowd of 5000-plus; over-worked but courteous marshalling.

The runner-up (Euan Walker from Kilmarnock) gave it his all. Five down at one stage, he squared the match with 3-holes to go with a courageous run of six birdies in 25-holes (some quite unbelievable) If only those two, outstanding Mallow GC and GUI stalwarts, Dick Barry and Percy Shannon, were there to see it.

I’ve long been critical of the Munster Branch’s coaching policies but a finalist in last year's Amateur (Robin Dawson) and the champion this year shows progress I would never have predicted. Next, I want to see a professional champion from Munster; maybe even a major champion?

The club will develop many champions in the years ahead because of it. I understand that moves are afoot to build a state of the art 10-acre academy right in the centre of Munster at Cahir Park GC.

That would be a fantastic development, if it can be made to happen?

James Sugrue has some difficult decisions to make. There is a good argument for striking while the iron is hot and joining the professional ranks immediately but, how do you turn your back on playing for your country, in the Walker Cup, Open Championship, US Amateur and The Masters and then, after all of those experiences of a lifetime giving pro golf a try?

It's difficult to pinpoint exactly why so many amateur champions have failed to gain traction when they became professionals. It must be the 'intangible unknowns' that make the difference?

This weekend, at Lahinch, I'll be spending more time at the practice ground area and watching the on-course action on TV in the Media Centre than being out on the golf course. From experience, I know that watching a pro tournament is very difficult.

Of course, one of the home players led by Padraig Harrington, Graeme McDowell, Seamus Power, Shane Lowry and Cormac Sharvin (an in-form outsider) could be in contention for 'the win' on Sunday? Each is a potential winner, demonstrating the strength of the field Paul McGinley has gathered. Believe it or not, I may not have managed to name the winner (Eddie Pepperell springs to mind)

Sorry, Eddie for this kiss of death but I'd dearly love to hear your insightful and witty interviews in person.

Above all considerations, the Irish Open is a player's competition and it is their livelihood. Treat them as if you were competing yourself. No unnecessary noise or distractions! Be considerate towards and co-operate with the Marshalls who are volunteers. Stay behind the ropes. Give the players and other spectators plenty of room. The bigger and wider the arc, the more you will see. Stay well clear of the greens and bunkers. Wear flat shoes. Walk; don't (ever) run. Be still and silent when a player is making a stroke. Be mindful of, and fair to, the players who may not have a gallery following them. In following certain players, be alert that you may be getting in the way of others. Fair play is in your hands: follow the golden rule of treating others as you would like to be treated yourself.