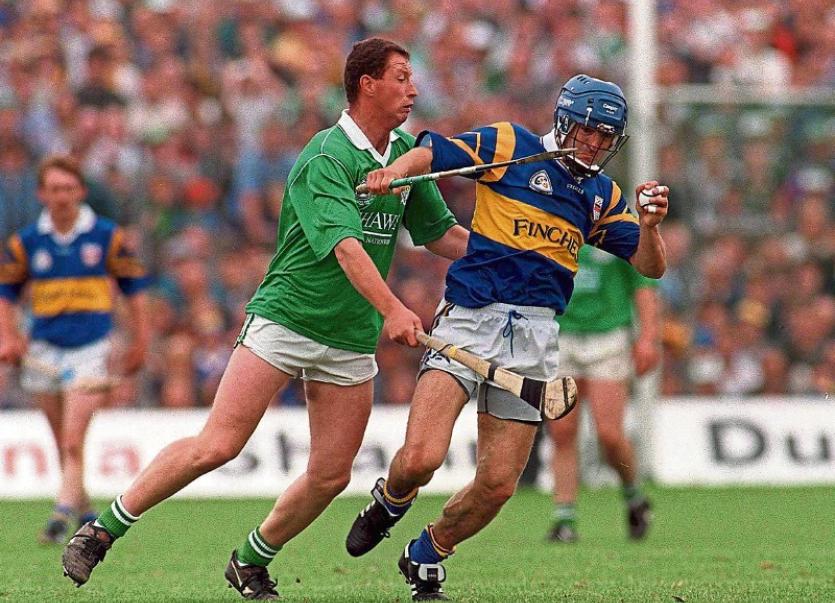 Last time out: Tipperary's Colm Bonnar holds off the challenge of Limerick's Frankie Carroll during the 1996 final

LIMERICK and Tipperary have met in the Munster SHC final on fifteen occasions. Six of Limerick’s 19 Munster crowns were won against the men in blue and gold. Of 45 Limerick Munster senior hurling championship final appearances, just have eight have been on home soil.

In three final meetings – 1895, 1922 and 1996 - Limerick are yet to make home advantage count to beat Tipperary in a provincial senior final.

The first ever championship meeting, there have been 70 in total, was the final of the 1895 Munster final.

The tie wasn’t played until February 23 in 1896 and was held in the Fairgreen in Kilmallock – a double-header with the Munster football final.

The Markets Field hosted 1922 final – the Limerick v Tipperary final was to be played in Cork but the bridge in Mallow had been blown up and as trains would not be able to run, the final was switched to Thurles. This final finished level 2-2 each and a replay was needed.

Six weeks later the replay took place in Limerick - in the Markets Field on August 12, 1923.

In 1996, 43,525 saw Limerick and Tipperary finish level in the Gaelic Grounds final on July 7 – Tipperary were in front at the break by 1-11 to 0-4. In the second half Limerick scored ten points without reply to force a replay in Pairc Ui Chaoimh, which Tom Ryan’s men won 4-7 to 0-16.