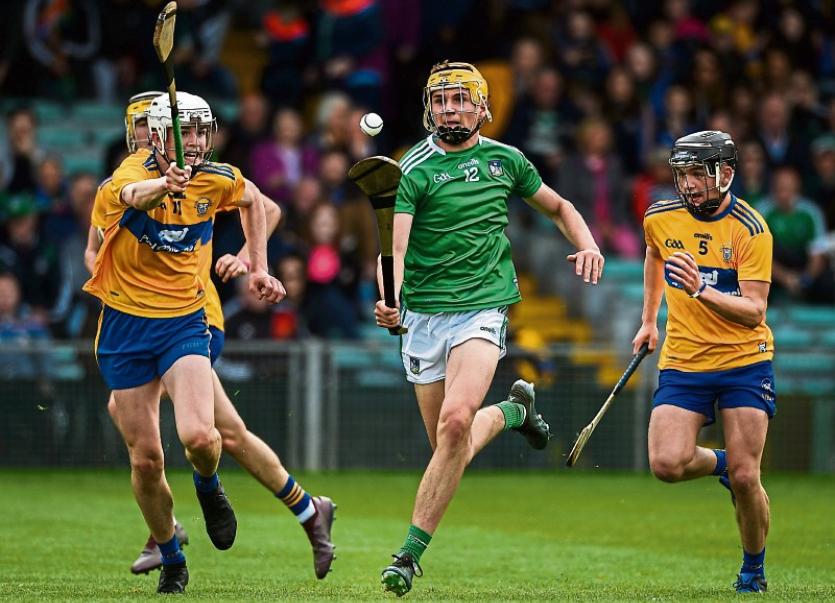 The Banner are back: Cathal O'Neill of Limerick in action against Cian Galvin, left, and Jarlath Collins of Clare when the sides met in the Minor Round Robin series

LIMERICK minor hurlers will chase a third provincial title in seven years when locking horns with local rivals Clare in Sunday’s decider at the LIT Gaelic Grounds. Munster’s showpiece U17 hurling fixture has an early start time of 11.30am. Sunday’s final will be the second meeting between the sides in just three weeks with unbeaten Limerick scoring a 0-16 to 0-13 success at the Gaelic Grounds earlier this month.

However, Limerick minor manager Diarmuid Mullins says that round robin game will have no bearing on Sunday’s clash.

Diarmuid Mullins, a two-time Leinster and All-Ireland minor football medal winner with Laois said: “We know each other reasonably well from that fixture. It was a close game that day.

”A couple of times that day in the game, we had maybe pushed ahead a little bit, but going into injury time there was only one point in it, so in a game of that nature it can go either way.

”I suppose we know a little bit more about each other, but that’s just about it. I expect that Sunday’s game will take on a life of its own in terms of what is going to happen.”

Limerick are waiting on the fitness of both wing back Colin Coughlan, who suffered a broken thumb earlier in the summer, while team captain Michael Keane, of Adare, has been sidelined with a hamstring issue.

Mullins has been impressed with the team's level of support this summer.

“We have had great support in the games we played so far. Down in Thurles the last day there was a great Limerick crowd in.

”Limerick people realise we have a good minor team here, lads who have been really applying themselves well. It is definitely something that helps us, that we have good support.”