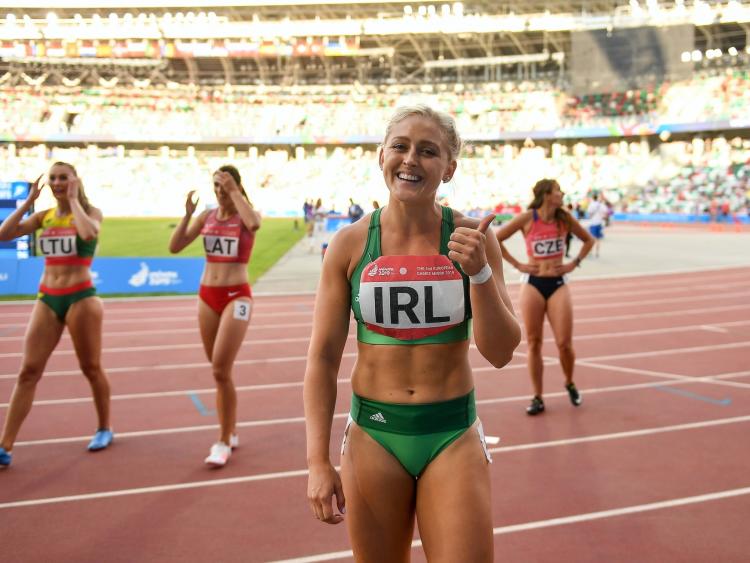 The Limerick athletics trio of Sarah Lavin, Amy O'Donoghue and Sophie Meredith competed for Ireland this afternoon the European Games in Minsk featuring in the new look Dynamic New Athletics (DNA) event. Ireland placed 5th and will now compete in the DNA Quarter Finals on Tuesday!

Dynamic New Athletics (DNA) made its debut on Day 3 in Minsk with Team Ireland competing against Poland, Belarus, Czech Republic, Latvia and Lithuania across 8 events and the final decider of the match ‘The Hunt’.

Limerick's Sophie Meredith concluded the long jump in 6th place with her best a jump 5.74, while Sarah Lavin finished second in the Women's 100m hurdles. Limerick's final athlete into action on the day was Amy O'Donoghue.

The DNA match concluded with a new finale race ‘The Hunt’, a Mixed Medley Relay of 800m, 600m, 400m and 200m with the winner progressing straight to the DNA Semi-Final.

LISTEN: We spoke to Conall Kirk, Amy O’Donoghue, Paul White and Victoria Harris after they competed in The Hunt.

Speaking after The Hunt, the team were excited and looking forward to the quarter finals “It was very different to anything we’ve ever done before, starting with a handicap, that was very different, but because it’s a team it’s great fun as well. We literally didn’t know what to expect until we were on the track running. I think we’ve learned a lot from this and will probably know how to analyse it a bit better tonight after we’ve all got together and talked about it”

In other results, Niamh Whelan ran a season’s best in the women’s 100m, finishing in 11.79 for fourth place while Grace Casey was also fourth in the javelin, her best throw 40.11.Brendan Arrey, Sinead Denny, Catherine McManus and Andrew Mellon combined for the mixed 4x400m Relay where Ireland claimed another fourth place in 3:24.37 while Gerard O’Donnell clocked 14.15 and fourth once again.

Nelvin Appiah collected 7 points for Ireland in the Men’s High Jump. He finished in joint third with Czech Republic’s Martin Heindl. Sarah Lavin pushed Ireland in to third place ahead of the final event with a second-place finish in the women’s 110m Hurdles. Lavin was just outside her best of 13.26 clocking 13.46.