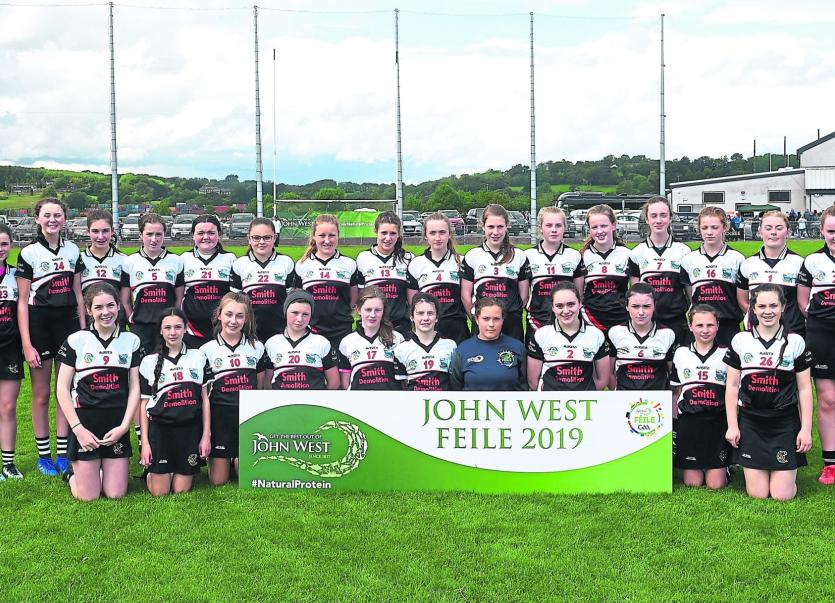 IT was a hectic weekend of action for the Limerick clubs at the 2019 John West All-Ireland Féile na nGael Hurling and Camogie across Cork and Kerry, and also the All-Ireland Regional Féile Competitions.

They faced their Cork namesakes Na Piarsaigh in the opening game, agonisingly losing by a point on a 2-9 to 2-8 score-line in a game where Josh Sheehan (2-4) scored both of their goals.

Sheehan was goal hungry over the weekend and helped Na Piarsaigh to a strong start against Dicksboro, but the Kilkenny outfit upped their game and recorded a 6-1 to 1-7 win.

In another keenly contested group clash Na Piarsaigh faced hosts Erins Own, but lost 1-9 to 1-5 in a game where Josh Sheehan scored 0-5 and Sam Murray grabbed the goal.

This ensured a quarter-final against Naas, and a late goal ensured a 1-6 to 1-5 for the Kildare side, with Josh Sheehan scoring 0-5 and Jack Kinsella grabbing a goal.

Hospital-Herbertstown represented Limerick with pride, reaching the semi-final of the Division 7 Cup competition, losing out to eventual winners Ruairí Óg Cushendall by 1-7 to 1-3 in Coachford

Hospital-Herbertstown powered through the group stages, starting with a 3-5 to 0-3 win over Kilavullen, before following up with a 1-5 to 0-2 win over Monageer-Boolavogue in the group games on Friday.

They stormed to a 4-8 to 0-1 win over North Wicklow Gaels in Ballyhooly.

Newcastle West came close to Division 1 Shield Camogie silverware, after a 1-3 to 0-3 loss to Dicksboro.

A Libby Carroll goal proved crucial for the Kilkenny side, who led 1-2 to 0-2 at half-time, with Rachel Dowling adding their points, and Lilly Duggan on target for all of the Newcastle West scores.

However, in their last-eight encounter, they lost to Kilkenny's Conahy Shamrocks by 2-5 to 2-2.

Bruff were represented on the double in both Hurling and Camogie, with both teams reaching the semi-finals.

The hurlers reached the Division 3 Cup semi-finals, but lost out to eventual winners Castleknock by 1-4 to 0-4 in Sunday's last-four clash in Ballincollig.

A strong start was key to victory for the Dublin side, who led by 1-2 to 0-0 after just four minutes. Mikey O'Riordan lead by example for Bruff and opened their scoring, with Owen Meany and Tadhg Boddy also adding points to ensure a 1-3 to 0-4 half-time score-line.

Defences held strong on the restart, with just a point produced by Castleknock as Bruff were unable to find the goal they craved.

Earlier Bruff topped their group thanks to wins over Cork sides Cobh and Kiltha Óg, and Trim of Meath.

In the quarter-final they beat Fourmilewater of Waterford by 2-3 to 1-4 in a cracking encounter at Mayfield on Saturday afternoon.

Their Camogie counterparts team were in Regional Division 1 Féile action in Clara, Kilkenny, reaching the semi-finals, before losing out to Wexford side Glynn-Barntown.

In the Group stages they lost their opening game to eventual winners Craughwell of Galway by 4-4 to 1-0, after being 3-1 to 0-2 in arrears at half-time.

They bounced back with a victory over Inagh-Kilnamona of Clare, before exiting the competition at the semi-final stage.