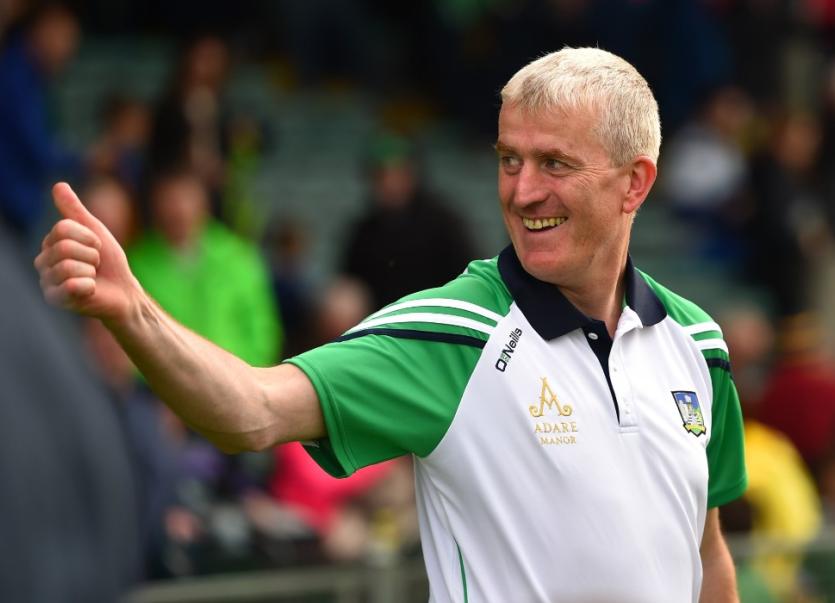 “I WOULD put it up there,” answered John Kiely when asked if the 18-point win over Clare was one of the best performances from his team across his three year tenure.

“It’s probably one of our better performances alright, yeah,” said the Limerick manager.

“​There is always the chance that you could get it wrong or over cook it. Sometimes it can mean so much to you that it’s too much and you don’t perform. We kept totally away from any emotive issues this week and we totally focused on the practical element of our performance. We stayed away from emotion and focused on getting ourselves right on the pitch and doing what we have wanted to do in the past but didn’t do,” he explained.

“It was a good performance, yeah. From start to finish really. We set the tempo of the game ourselves early doors. What we were trying to do for the last two years – which we didn’t do – was just get our set-up right, our process right. And we got it right today from the very word go. And fellas stuck to it from start to finish. We really worked very, very hard. Our use of the ball was exceptionally good, we didn’t waste much ball. And if we did turn it over, we went back and got it again. Up front, we created great space. The guys attacked the space really hard. Our efficiency up front was probably the best it has been all year as well.”

Limerick's 1-28 to 0-13 win over Clare was the biggest championship win over the Shannonside neighbours since the 8-3 to 1-5 win in Ennis in 1941 - when incidentally Limerick were also defending their All-Ireland SHC title.

John Kiely heaped all praise on his players.

“All credit to the players they found themselves in a really difficult place three weeks ago and they dug themselves out of a hole last weekend to give ourselves a chance this weekend and this weekend they kept on digging to get themselves out of a bigger hole in terms of trying to stay in the competition and stay in the game of the championship. We have more work to do - we only have four points but all credit to the players they have been fantastic and worked so hard in the last month,” he outlined.

The manager accepted that the thought of being the earliest champion to exit since 1992 was a motivation.

“The implications of defeat more than focused the mind. When you know that should you not produce the goods you’re going to be gone out of it – for us, it was an inconceivable thought, let alone a reality. There was no way we were going to let it go today, that we were going to exit the championship at this early stage. It was just inconceivable,” he stressed.

“It's totally in our own hands” beamed Kiely of Limerick’s journey.

Mathematically Limerick can be denied one of the three places from Munster in the All-Ireland SHC series, but it would take a remarkable sequence of results given the +31 scoring difference for the Liam MacCarthy Cup holders.

Limerick go to Thurles next Sunday (2pm) in the knowledge that victory will surely confirm a June 30 Munster final spot but again there are varying permutations.

If Limerick miss out on a Munster final spot, which would be in the LIT Gaelic Grounds against Cork or Tipperary, they would see All-Ireland SHC action on July 6/7 against the beaten side from the Joe McDonagh Cup final – most likely Laois or Westmeath.

“The consequences of it being a Munster final or anything else are irrelevant to me - I don’t think like that, we don’t think like that. We want to go to Thurles and put in a really credible, honest performance against one of the best teams in the country right now and that’s the challenge for us this week,” outlined Kiely.

The Limerick manager is in no mood to allow results elsewhere determine the fate of his side.

Liam Sheedy’s Tipperary have the only 100% record in the championship.

“They’re just in a great run of form at the moment, but it is what it is - we always knew we’d have to go to Thurles for the last game of the group. And it’s totally in our own hands,” said Kiely.

The Limerick manager was happy to have repaid the faith of the green and white supporters with the big derby win.#

“There was no way we were going to let down our support by putting in a performance that wasn’t anything but the very best that we could get out of ourselves. It wouldn’t have been good enough, simple as that. Two home games, you got to produce the goods. There is no getting away from that.”