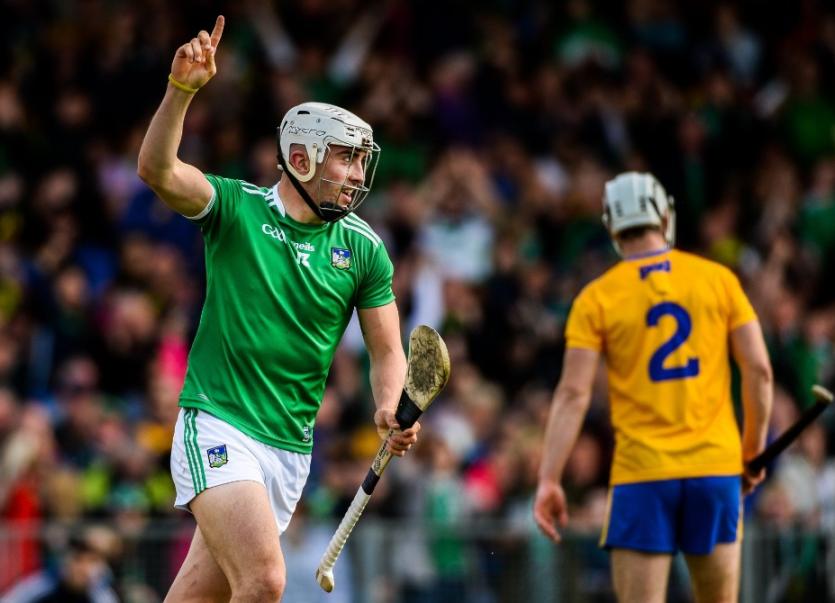 Aaron Gillane celebrates his goal in the LIT Gaelic Grounds

LIMERICK'S 18-point Munster SHC victory over Clare all but confirms that the All-Ireland champions are to continue on their title defence into July.

But the permutations are plentiful.

Next up for Limerick is a trip to Thurles next Sunday (2pm) to play undefeated Tipperary in the final round of Munster SHC group games.

Win, lose or draw, Limerick will pretty much finish in the top three in the final provincial league table and continue into the All-Ireland series. It would take a big Limerick defeat to Tipperary and a big Clare win over Cork to see the Liam MacCarthy Cup holders exit.

Were Limerick to finish in third place in the Munster SHC, as they did last year, they would advance to play away to the Joe McDonagh Cup runners-up on July 6/7 in a preliminary All-Ireland SHC quarter final - most likely the Eddie Brennan managed Laois in Portlaoise or the Joe Quaid managed Westmeath in Mullingar.

If Limerick go this route, they would be seeking to advance to a July 13/14 All-Ireland SHC quarter final, most likely against the beaten Leinster SHC finalist.

Ahead of next Sunday, journalist Denis Hurley has outlined the varying permutations.