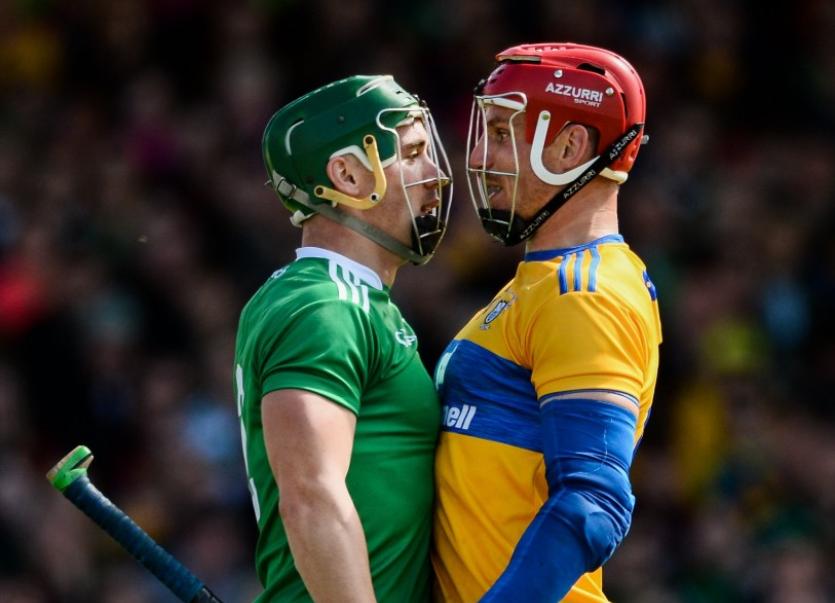 LIMERICK put a marker for all when sweeping Clare aside in the Munster Senior Hurling Championship this Sunday.

The Shannonside derby ended Limerick 1-28, Clare 0-13 to ensure John Kiely's men now have one foot in the knockout stages of the championship.

Limerick go to Tipperary next Sunday in the knowledge that victory will confirm progress to the Munster final or All-Ireland series - pending results elsewhere.

A Limerick Munster final with Tipperary or Cork would be in the LIT Gaelic Grounds on June 30. If not a Munster final appearance, Limerick would be in July 6/7 against the beaten finalist from the Joe McDonagh Cup - most likely Laois or Westmeath June 30.

Watched by an attendance of 29,611 Limerick were 0-15 to 0-7 ahead after a half in which there were two Limerick wides and one for Clare.

In the first Munster SHC Shannonside derby in Limerick since 1996, Limerick raced from the blocks and were 0-6 to 0-1 clear inside 10-minutes with a clinched fist from captain Declan Hannon when he long range effort moved the men in green five clear.

The opening exchanges could have brought goals at either end. Kyle Hayes was denied after 35-seconds by a David McInerney block, while at the other end Hannon flicked off the hurley of Peter Duggan, Sean Finn blocked both Aron Shanagher and John Conlon.

Tom Morrissey and Graeme Mulcahy hit back to continue the Limerick dominance, which was built as always on a high octane intensity and fast intelligent movement of the ball.

Duggan and Clare were up to six pointed frees by the 23rd minute and the scoreboard read 0-9 to 0-6 to Limerick.

From here to the half time whistle, Limerick hit six points and Clare had just one.

So at the interval the lead was eight points for John Kiely's heroes, who were bidding to end a run of three straight championship wins for the men in saffron and blue against the Treaty men.

Clare did bring early added pressure in the second half but made no in-roads and after 10-minutes of the new half the sides had two points each with Tony Kelly getting the second Clare score from play in this period.

Then five unanswered points from Limerick moved them 0-21 to 0-9 clear by the 50th minute mark, with the first of the Clare support making for the turnstiles.

Tom Morrissey, Diarmaid Byrnes and Peter Casey were among this scoring run as Limerick eased out to 13-points clear.

Aaron Gillane then goaled in the game's 59th minute - crashing to the net after a delightful delivery from Kyle Hayes.

When Peter Casey fired over two quick-fire points the lead was 17-points and Limerick well on their way to avenging the Cusack Park loss last Summer in Ennis.