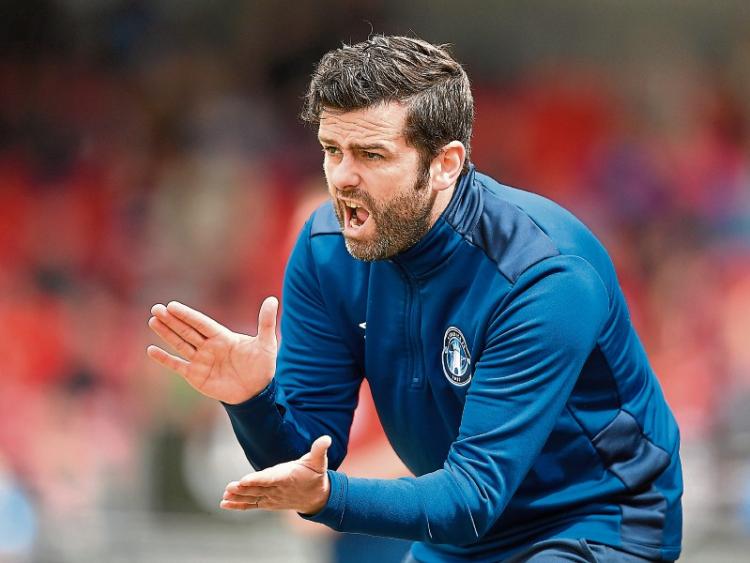 LIMERICK FC will look to get back to winning ways in the SSE Airtricity League First Division this Saturday at the Markets Field. Tommy Barrett’s charges will host struggling Galway Utd in a crucial fixture at the Garryowen venue which has a 6.30pm venue.

The game is being played on Saturday rather than Friday night when Limerick traditionally play home games in order to avoid a clash with the Rep of Ireland’s home fixture in the European Championship qualifiers against Denmark at Telia Parken, in Copenhagen.

Limerick FC’s two game winning run in the First Division was halted with the side’s 1-1 draw with Athlone Town at the Athlone Town Stadium on Friday night. Limerick will be seeking to extend their unbeaten league run to four games on Saturday.

Limerick, who went into the Athlone game on the back of successive league wins over Cobh Ramblers and Cabinteely, had in-form striker Connor Ellis to thank for his second half equaliser against the side sitting second-from-bottom in the league table.

It was Ellis' second goal in as many weeks as he headed home the precious winner against Cabo' at the Markets Field.

The ‘Blues’ had begun the night 14 points clear of ninth-placed Athlone and would have fancied their chances of making it three wins on the bounce.

However, in the end, the visitors had to be satisfied with claiming a share of the spoils from the fixture ahead of their next First Division outing against Galway on Saturday.

Limerick currently sit in sixth place in the First Division table, now half a dozen points behind leaders Shelbourne.

The ‘Blues’ are only four points off third-placed Drogheda United, however, and two points off fourth placed Cabinteely.

Limerick remain unbeaten at home in the league this season ahead of the visit of eighth-placed Galway Utd to the Markets Field. Limerick have won four and drawn three of their home fixtures.

Limerick FC manager Tommy Barrett made two changes to his starting line-up for the game in Athlone with captain Shaun Kelly and Karl O'Sullivan returning to the starting line-up.

After a quiet opening to the game, Athlone hit the front midway through the first half when midfielder Kealan Dillon fired the Midlanders in front with a fine strike from the edge of the box.

Limerick needed to step up their performance level after the restart and they managed to do that.

On 57 minutes, the Blues created their best chance of the game to that point when substitute Walsh O'Loughlen created the opening with a terrific run. However, Connor Ellis' shot was saved.

Limerick and Ellis were not to be denied three minutes later, however, as the striker netted a precious equaliser for Tommy Barrett's charges.

Neither side managed to find a winner over the remaining half an hour of a competitive fixture as the game ended in a stalemate.