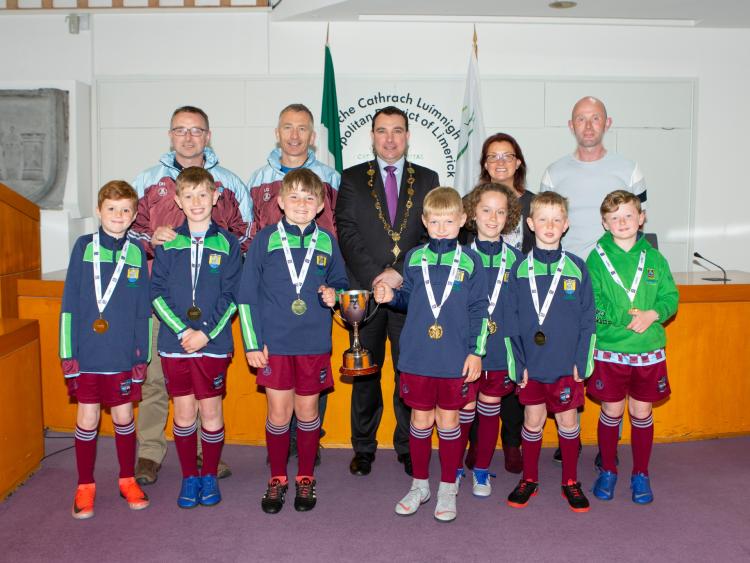 Ahane Castleconnell Montpelier (ACM) U10 indoor soccer squad were crowned All-Ireland Community Games champions last month at the National games in UL. The team were rewarded this week with a mayoral reception by Mayor James Collins.

The 8 players making up the Community Games squad are all U9 & U10 members of Lisnagry FC & have been playing together for the last 4 years. The lads are part of a group of more than 40 young soccer enthusiasts, so they’re already seasoned competitors with a strong team spirit & drive to succeed which was evident during the various rounds of the competition.

The squad has representation from each of the 3 local primary schools which means it’s a community team in reality as well as name.

Having fought hard to emerge successfully out of the Limerick qualifiers in March, ACM went on to become Munster champions in Tralee in April coming out on top (2-1) against a very strong Kerry team after trailing 1-0 at half-time in the final. The four provincial champions then met for the All-Ireland finals in UL Sports Arena on May 26 where the Limerickmen paired off against Connaught in the semi-final.

The day didn’t start well when the regular keeper, Sam Hogan was ruled unfit to play in goals due to a hand injury & even though he was disappointed, he handed over the gloves to Cian Cronin who gave up his normal sweeping role to deputise between the posts. A quick tactical reshuffle saw Rory Devine moving into defence to start alongside Harry Kett. Ewan Coulter started in the midfield playmaker role with Danann Glynn as lone striker. The pace was frenetic & quickly sapped the energy of the starting line-up so the remaining team members Cormac Ryan, Cian McCarthy & Sam rotated in & out seamlessly to keep the momentum going.

ACM started well & were 2-1 up at half-time, Connacht rallied in the second half with a couple of goals but ACM defended solidly & held on to win 4-3 after a very tense final few minutes as Connacht pushed hard for an equaliser that never quite came. The Limerickmen were delighted & after a quick rest & drink, they looked across at the closing stages of the other semi-final to see who their next opposition would be. That match ended with Ulster defeating Leinster in a surprise result.

A quick dash to Castleconnell church for 2 families for a confirmation ceremony of older siblings – Conor Devine & Liam Og Glynn and then back to UL and preparations for the final. A big crowd was in attendance and many of their Lisnagry FC teammates, families & neighbours turned out to encourage the team.

The same starting line-up pressed hard, swallowed up the early Leinster pressure and then established control in a near faultless first half performance that saw them leave the pitch for a well-earned break leading 5-0.

Leinster rallied in the second half with a couple of goals but the contest was all but over & the final whistle saw ACM win the game & competition 7-2. Cue huge celebrations on & off the pitch not least from the coaches & team management – Greg Coulter, Mike Kett, Liam Glynn, Sean Devine & Aileen Hogan.

The celebrations continued with a noisy cavalcade through Castleconnell village & the obligatory stop outside George Lee’s legendary Shannon Stores for refreshments. The boys all paraded their medals proudly in their respective schools the following day to the applause of the students & staff.

So, Ewan emulated the achievements of his brother, Ciaran Coulter, who won the same competition in its inaugural year of 2013. Ewan was mascot for the 2013 team & at the UL pitch that day we saw the next generation of mascots & future U10 competitors in Eoin Devine, Joe Kett & Seamie Glynn. The future looks bright for ACM & Lisnagry FC!