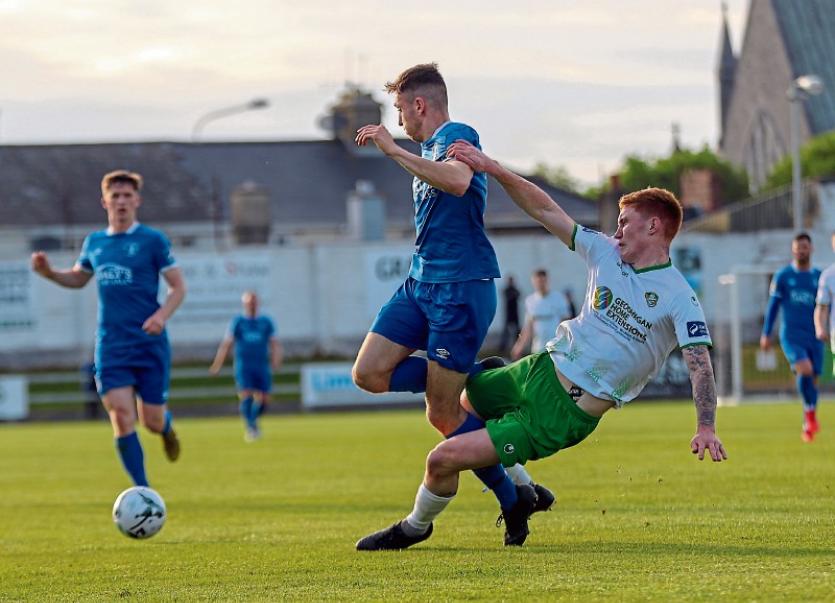 RESILIENT Limerick FC will look to make it a hat-trick of wins in the SSE Airtricity League First Division when travelling to Athlone Town on Friday evening, 7.45pm

Tommy Barrett’s charges moved to within four points of the summit of the First Division with a deserved 1-0 victory over previous leaders Cabinteely at the Markets Field on Friday night.

The game was disrupted in the second half for up to 25 minutes after the floodlights had not come on at the Garryowen venue.

When the lights did eventually come on, Limerick managed to make it back-to-back league wins, thanks to Conor Ellis’ first half diving header.

Limerick sit in sixth place in the table, but just four points off leaders Shelbourne, in a fiercely competitive First Division, ahead of Friday’s visit to the Athlone Town Stadium.

Athlone may be second-from-bottom in the First Division table, 14 points behind Limerick, but manager Barrett is taking nothing for granted.

Tommy Barrett said: “Athlone away, it is going to be tough. All the games in this league are tough.

“It is going to be difficult for us going up there to Athlone, playing on the astro pitch, but we will give it our best shot.”

Last Friday’s win over Cabinteely marked the end of a dramatic 10 days for the Limerick FC players.

Two weeks ago the Limerick FC players voted unanimously to serve strike notice on the club. Through a PFAI statement it was confirmed that if wages and expenses payments which fall due in the future are not honoured, then the players would go on strike.

However, it is understood that ahead of Friday night’s game with Cabo’, Limerick FC gave assurances to the PFA Ireland that the Blues players would be paid outstanding wages and expenses.

Tommy Barrett said: “(Chairman) Pat O’Sullivan is confident that the issues will be resolved. He has run the club for the last number of years and sorted people out.

“I’m hoping that it will be sorted. I don’t control the finances, so I can’t really answer for myself, but I am hoping that he can and he said he will, so we have to have faith that he is going to do that and hopefully as soon as possible.”

Barrett has been impressed with the players' resilience this season.

“I think we are a good solid group, we are all in it together, with the staff and players we have. There are good lads involved, good volunteers helping out around the place as well, even down to the youth set-up really good volunteers. It's a good core group there who are all working their socks off.”

Match referee Jason Mannix stopped Friday night’s game between Limerick and Cabinteely after 79 minutes with the home side leading 1-0 as the floodlights had not come on. Both sets of players remained on the pitch for 20 minutes as the supporters waited for the lights to work.

During that time, the PA announcer informed the attendance that the stoppage had been due to a 'technical issue' with the floodlights.

The PA later announced that supporters at the game should keep their ticket stubs from Friday night's game along to the next home game against Galway United on Saturday, June 8.

Limerick remain in sixth place in the table in the wake of this victory, just four points off new table toppers Shelbourne.

In Limerick FC team news prior to kick-off, Colm Walsh-O'Loghlen, Will Fitzgerald, Andy Quaid and Sean Russell missed the game through injury.

Shaun Kelly was absent through suspension after picking up five yellow cards. Kelly was replaced in defence by Tomas O'Connor.

In a lively opening, either side could have taken the lead into the opening six minutes, before Blues' striker Kieran Hanlon headed narrowly wide off Ellis' pinpoint ninth minute cross.

The home side really should have been in front in the 16th minute. Sean McSweeney set up Conor Ellis with a terrific pass, but the striker shot wide in a one-on-one opportunity after his initial effort was saved by Cabo' 'keeper Stephen McGuinness.

After a couple of earlier misses, Ellis finally fired the home side in front on 33 minutes. The lively O'Hanlon did well off a throw in, but his strike on goal smacks against the crossbar.

However, the alert Ellis was on hand to head into an empty net for the lead goal. It was no more than Tommy Barrett's charges deserved.