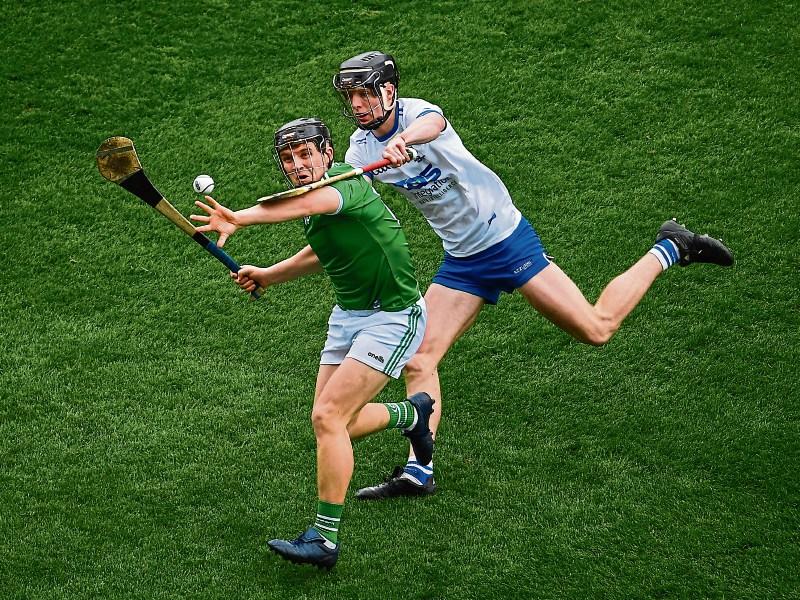 Peter Casey of Limerick in action against Calum Lyons of Waterford during the Allianz Hurling League Division 1 Final. The two sides will meet again this weekend in a winner takes all Munster champion

Defeat has a way of focusing the mind. At first there is an air of deep disappointment but good managers and teams find ways of turning things around fairly quickly.

I expect that will the case when Limerick travel to play Waterford in Walsh Park next Sunday. This game has taken on greater significance in the ten days and its importance to both teams can not be understated.

Waterford have lost two games and are in real danger of once again dropping out of the Munster championship earlier than they would have expected.

For Limerick, the current All-Ireland champions, the loss to Cork was a set back and one that will have put a real sharp focus on the team over the past ten days.

John Kiely has a very impressive record since taking over Limerick but he would not have factored in a loss to Cork.

On the day Limerick were poor, they were slow and the legs looked heavy. We have become accustomed to watching this team deliver a performance and I expect them to deliver a major response on Sunday.

Attitude is a vital ingredient to winning and Limerick never entered the space that saw them win the All Ireland last year when they played Cork.

Much was said and written about Walsh Park before a ball was hit in this years championship and how important it would be to Waterford to have two home games.

Well, Clare just about got out the gap when they played them in the first round but in reality they were a great deal ahead of them. Waterford came with a late rally and they will not want to lie down on home ground next Sunday.

Pauric Fanning is in his first year and by his standards his team have failed to perform so far. If they manage to beat Limerick on Sunday then their championship ambitions are very much back on the road. I would think John Kiely would have had to say little since the Cork defeat. The players will know themselves that they misfired and they more than anyone else will want to put matters right in Walsh Park.

Waterford can be flamboyant and they can be very poor and the latter best describes their games so far in the Munster championship.

Limerick had it easy against them in the league final but that game will count for nothing next Sunday. This game is about a result and the team that gets it might have a say in this championship yet.

Limerick will have gotten much food for thought from that defeat to Cork. Both players and management were struggling to understand where it all went wrong. They didn’t see that performance coming. The lead up to the game suggested they had done everything right but Championship has a way of finding weakness and on the day Limerick were found wanting.

At no stage in the game against Cork did we see Limerick play with the fluidity and energy that was so much a part of their game last year. They were always chasing and allowed themselves to be taken out of key positions. Cork outsmarted them. They had learned many lessons from last year and they put them to good use.

That will be the case with all teams Limerick play this year. I have written many times since the All-Ireland that teams will not standby and watch the Limerick half forward line go deep and allow them free passage up the field.

One of the difficulties in the game against Cork was that they didn’t alter their game plan, they seemed to stay loyal to what had served them well last year and that cost them. They needed to shake it up, they needed at times to go long. Particularly on a day when the half forward line was playing very poorly.

In that game with Cork we saw Limerick make five substitutes and none of them made an impact. It took the Limerick management a very long time to bring on the first sub.

Will the Limerick management make some changes for Sunday? Well, some would suggest they will but I think they will go along the same lines as last time out.

These lads will be given an opportunity to put matters right. Now, if some of them are struggling early on then it will require a much faster reaction than we saw against Cork.

Limerick played an A v B game last Sunday in the Gaelic Grounds and the management will either want to shake matters up a little or go with the same. There might be a case to make a change in the full forward line and while I am in this area of the field I would much prefer to see Aaron Gillane at corner forward.

He is not a central player. He operates much better from the wing and offers so much more from here. An early long ball to Gillane can really open up the opposing team and I would think personally he would also prefer to play on the wing.

The defeat against Cork might well be a blessing for Limerick. It might be the wake up call that really gets them in championship mode. We will know the answer to that next Sunday. The game with Waterford is about a result. The margin really doesn’t matter it’s about getting two points and the next game.

John Kiely looked shocked after the defeat to Cork but be assured he will have dusted himself down. He will set fire to them this week and lay it on the line. This game carries so much and defeat would all but end their ambitions for 2019. That is the reality facing the Limerick players next Sunday. Perform, win and move forward to the next game is the agenda plain and simply.

Waterford’s record in the Munster championship over the last number of years has been really poor. They have played eighteen games since 2010 and only won four of them. They are a team that has promised much but all too often they fail to deliver. For many of their experienced players this might be their last year.

Will they find a nugget to pin a big performance on next Sunday? Have they the capacity to hurt Limerick? Well, performances so far wouldn’t suggest that but Championship is so unpredictable and results so far this year in both hurling and football underpin that.

When Clare played Waterford Walsh Park was far from full but that will not be the case on Sunday. The venue will be packed to capacity and while Limerick will be the favourites they can and will not take anything for granted.

Waterford have nothing to lose. If they got in a flow few teams are better equipped to drive on. They have some really top players but for some reason they have not gelled as a unit.

This could be a very close affair if Waterford find momentum. They have enough talent to do that but Limerick know what’s at stake and I expect they will get back on track on Sunday.