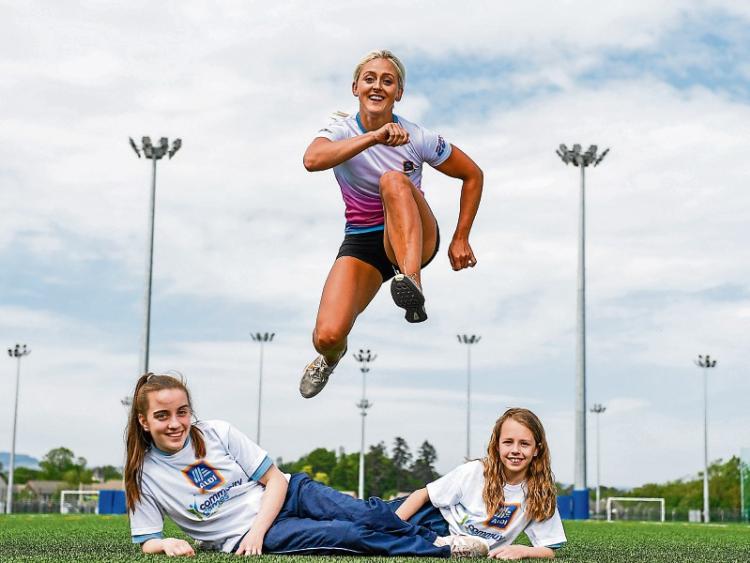 Sarah Lavin, with Shannon Sweeney, aged 12, left, and Olivia Flannery, aged 10, both from Limerick, at Maguires Field for the launch of the Aldi Community Games Festival

MONDAY, August 3, 2020. It’s etched on Sarah Lavin’s mind - the date of the women’s 100m hurdles final at the Tokyo Olympics in Japan.  Lavin’s determination to make it to Tokyo in 14 months – and the chance to be the first Irish female to make it to a sprint final at an Olympic Games – has been reinforced by her experience of missing out on the chance to compete at the 2016 Games in Brazil’s Rio de Janeiro.

An unfortunate foot injury ended the Lisnagry physiotherapist’s hopes of lining up in sport’s most spectacular event three years ago.

Looking back to that period, Sarah Lavin recalled: “I fractured my navicular, it has the worst blood supply in the body, so out of all bones to fracture it was not ideal. I was harsh on myself in 2015, harsh on my diet and ended up losing a bit of weight and then had to really put on a huge amount of weight to get my metabolism back working which is really hard as a young 19-year-old female.

“In 2015, I had a few injuries of course because my body was under fuelled. In 2016 I had to do a serious amount of training if I wanted to make Rio (Olympic Games in Rio de Janeiro) and I was going to watch it on the couch if I didn't do the training and even looking back now I know that.

“I just did too much and it was a stress fracture which was just building and I didn't realise it at all, I never thought I was training hard enough to get a stress fracture to be honest. I was down here (at UL) one day and it completely fractured.

“It's a tough sport and it teaches you so many life lessons, but the highs are so bloody high that even in the darkest of days - I was 16 weeks in a boot on crutches with the injury - but I would go through it all again to be honest with you to get one more high.

“You know it could be a blessing in disguise as well because I did my 16 weeks, it healed perfectly, did everything by the book and it also made me very mentally strong that I don't think I would have gained that were it not for that experience looking back now.

“It puts a lot of things into perspective. Again, nobody died, but to you at the time you think it is the worst thing that could possibly happen. They are really hard lessons at the time, but you definitely benefit from them once you are out the other side.

“That is why this year is so important because they are changing the qualification process. Basically it is all on a points system so your top five aggregate times over this season and next season count with IAAF scoring points. You have to be top 40 on the world IAAF. All of this plays into every race almost counts, but it is exciting.”

Sara Lavin had a stellar CV as a junior athlete. In 2011, the resilient Limerick hurdler made her first real mark on the international circuit by finishing third in the European Youth Olympics in the 100m Hurdles in Trabzon, Turkey, breaking the national youth record (U-18) in the process.

2013 was a stellar year for the Emerald AC and UCD athlete. On the indoor circuit she broke the National Junior Record that had been previously held by Derval O’Rourke. She then proceeded to win the National Seniors title indoor and out.

Further notable wins followed that summer in Palafrugell in Spain and Geneva, Switzerland, when she broke O’Rourke’s 13-year-old Irish junior record (13.61) twice on the same day, posting 13.50 in her heat and winning the ‘B’ final in 13.45 and later in Mannheim – Germany.

A memorable outdoor season culminated at the European Junior Championships in Rieti, Italy where Lavin won silver and broke the national junior record yet again with a new mark of 13.34 seconds.

The talented Limerick woman had gone into the championships ranked fifth in the world as a junior and second in Europe.

The transition from junior ranks into senior competition takes time, even for an elite athlete.

Sarah Lavin said: “When I was a youngster I remember being on the front of a magazine, sitting at a table with people I would have really looked up to and I was only 18 or 19. I never asked for it. I just happened to run really well a couple of years in a row and suddenly I was high up in the world rankings, getting so much, I was an Adidas sports ambassador, I never dreamt of that.

“People were saying, ‘don't lose the run of yourself now’, so many junior athletes don't make it through, but to be honest there was no fear of me ever losing the run of myself because I was diligent about everything.

“It's a tough sport and it teaches you so many life lessons, but the highs are so bloody high that even in the darkest of days - I was 16 weeks in a boot on crutches - but I would go through it all again to be honest with you to get one more high.”

This week, Lavin, who turned 25 in recent days, was named in the 65-strong Irish team to complete at the European Games in Minsk which run from June 21 to 30.

After graduating in physiotherapy from UCD last September, the four-time National Senior champion is based in Limerick full-time now.

Sarah Lavin said: “Noelle (coach Noelle Morrissey) and I are back just solely working together this year. It worked before and it is working again. My first two races were my quickest ever opening races.

“The European Games are at the end of June and then maybe world university and maybe nationals. The European teams are in Norway in August, the World Championships are in Doha in October, it is literally go, go go until then.

“The new track at UL is incredible for training. It is the best place you can be in the country.” she added.