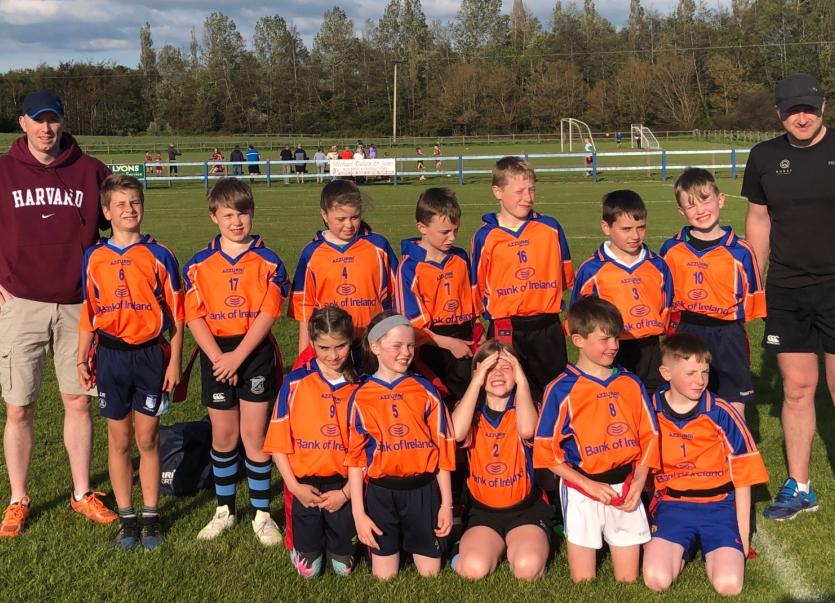 The Rathkeale area has a rich history in the tournament – having secured several national titles since tag rugby was introduced in 2004  – but has not fielded teams in recent years.

However, there has been a recent resurgence in the Community Games movement generally in Rathkeale\Croagh-Kilfinny and as part of this, tag rugby has resumed. The club were able to field two teams in this year’s U11 Mixed Tag Rugby competition, one of which emerged as winners of the West Limerick blitz held in Shanagolden in early May. Winning this tournament put them through to the County play-offs which were held in Rathkeale last week.

On a beautiful evening, Rathkeale faced tag rugby ‘heavyweights’ Regional in the County semi-final, in front of a strong local crowd at Rathkeale AFC grounds. It was a nip-and-tuck affair in the first half, as the teams traded scores, with just two tries separating them at the interval. The second half continued in the same vein but Rathkeale couldn’t live with pace of Regional and they progressed to the County final.

For Rathkeale\Croagh-Kilfinny, there was still the prospect of County medal at stake as we took on Castlemahon/Feoghanagh in the third-place play-off. This was a thrilling encounter, with end-to-end running, and no shortage of skills on display. Onlookers saw the ‘dancing feet’ of James Doherty, Alex Hogan and Rachel Walsh; the explosive breaks of Darragh Ryan, Ned Teskey, Daithí O’Mahony and Emma O’Connor; the slick passing of Aaron O’Connell and Dara Giltinane; and lung-bursting defensive efforts from Mícheál Giltenane, Rachel Johnson and Anna Giltenane who chased down opponents as if their lives depended upon it. Rathkeale/Croagh-Kilfinny emerged victorious to claim a deserved bronze County medal in their first year back in the tournament.

A special word of thanks to Rathkeale AFC who have been a tremendous support – not only to the tag rugby team, but to the Community Games movement generally in the area. The club has very kindly made their facilities available to us for training, matches and sports events and ‘pulled out all the stops’ to host the county play-offs last week. Their community spirit is to be applauded and is very much appreciated by Rathkeale\Croagh-Kilfinny Community Games Committee.