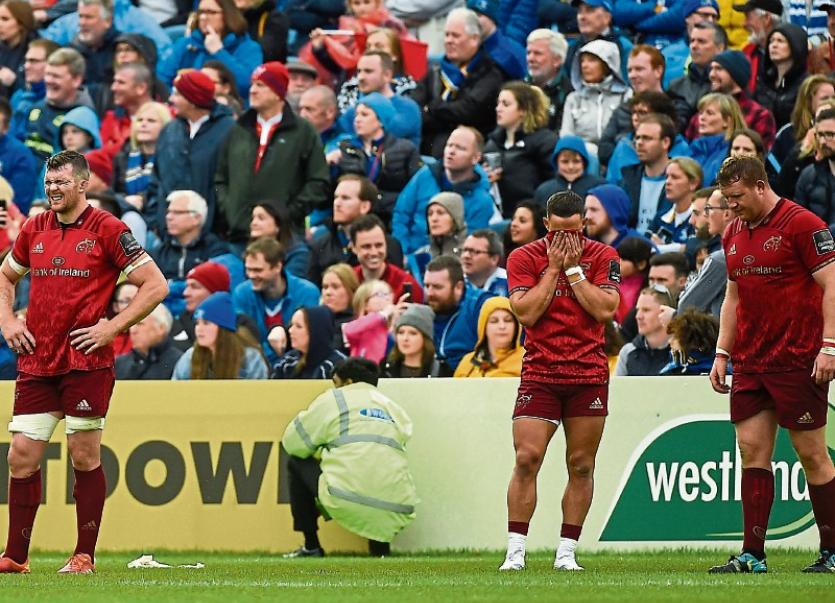 THE curtain came down on Munster Rugby’s season last Saturday at the RDS as the province’s challenge for Guinness PRO14 honours petered out in the second half. Leinster were simply too good on the day, another reminder of the gulf that exists between the two provinces. It was a tough one to take for the Munster supporters in the ground – probably numbering about 3,000.

The sense of frustration and disappointment on the back of another defeat against the ‘old enemy’ heightened by the fact that Munster don’t appear to be closing the gap on arch rivals Leinster.

This was also Munster’s eighth semi-final defeat, along with two final losses, since they last lifted a trophy back in 2011.

Of course, many clubs competing in the Guinness PRO14 and Heineken Champions Cup would be more than satisfied to make the last four stage of their domestic league competition and Europe’s premier club competition.

However, Munster’s decorated history and tradition means supporters have high expectations for the team, perhaps too high at times, but lofty nonetheless.

Munster can take a number of positives from the season. The province didn’t lose a single fixture at home in 2018/2019 and something as simple as winning one more game and getting a home semi-final, instead of having to go the RDS last Saturday, could have made a big difference.

But that is of little consolation now. Munster are in for a summer of soul searching as well as assistant-coach searching.

It is hard not to notice an apparent fall off in interest for rugby during the month of May if Munster have already exited the Heineken Champions Cup.

Some supporters place way too much emphasis on the significance of the Champions Cup right now, especially for a team which has not won any silverware since and not claimed a coveted Champions Cup crown since 2008.

Munster fans need to be realistic. Winning a Guinness PRO14 title next season would amount to a significant achievement for the province. Regaining the Champions Cup title could be some way down the road still.

Munster head coach Johann van Graan confirmed last weekend that the province will only have one new recruit to its ranks this summer, scrum-half Nick McCarthy who joins from Leinster.

The emphasis at Munster through pre-season and early months of next term will be on improving the players within the squad.

The province will appoint three new assistant coaches in the coming weeks and months.

Their job of work will be made significantly more difficult by the fact that a good number of Munster’s most experienced players will be away on World Cup duty through pre-season and the opening months of the season, even allowing for the fact that the Pro 14 start date has been pushed back out to the weekend of September 27-28.

Munster must hit the ground running next season, just to emulate the achievements of this season, never mind surpassing them.