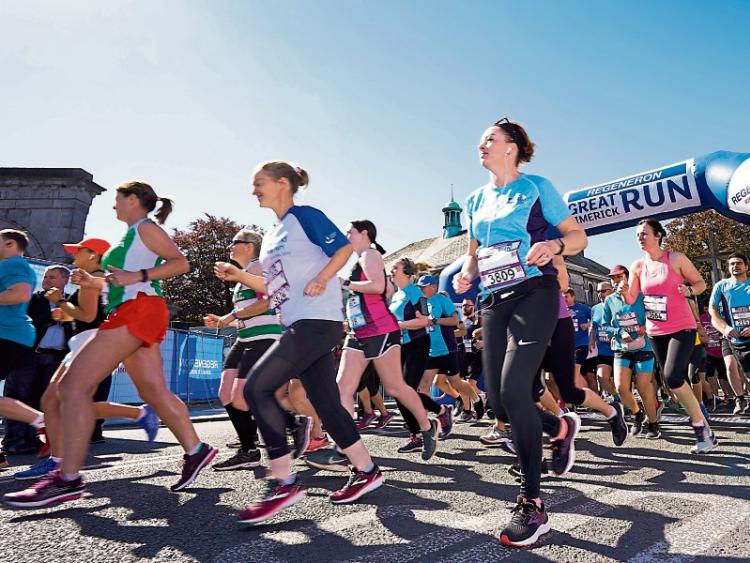 Action from the Great Limerick Run

The Great Limerick Run Marathon and Half-Marathon both served as Munster Championships this year and results have been published. In the women’s marathon, Eileen Reeves of Dooneen AC won silver in the O45 category and Jean Costello of Limerick Country Club won bronze.

The Munster Schools Track and Field finals were held over the weekend. Many athletes from Limerick schools and clubs took part on the day.

In the junior category, Sarah Butler of Laurel Hill Secondary School won the 800m and Maria Campbell of Crescent was in second. Laurel Hill won the 4 x 100m relay final.

The intermediate category saw Diro Lawel of Castletroy College win the 200m final and silver in the 100m. Rory Prendeville of John The Baptist took gold in the 400m final and bronze in the 800m and Kelvin O’Carroll of Árd Scoil was 4th in this race. Jack O’Connor of Árd Scoil was 2nd in the 400m. Meghan Lenihan of Hazelwood College won the discus and was second in the shot put. Oyinkan Adedeji was 7th in the 80m hurdles and 300m hurdles. Castletroy College were second in the 4x100 relay and Árd Scoil were fourth.

Sophie Meredith of SMI Newcastlewest won the long jump title and Annie Russell was 3rd in the 400m final. Shauna Ryan of Crescent was 3rd in the triple jump.

Kilmallock AC 4 mile takes place on Friday, 24th May, Kilmallock at 7:30pm. On Sunday, 26th May Brenda & Michael Nolan Memorial 5K will take place in Shanagolden at 1pm. Then, the final leg of the Michal Rejmer Run Series Race 3 postponed from last month will take place on 31st May, The Country Club at 7:30pm