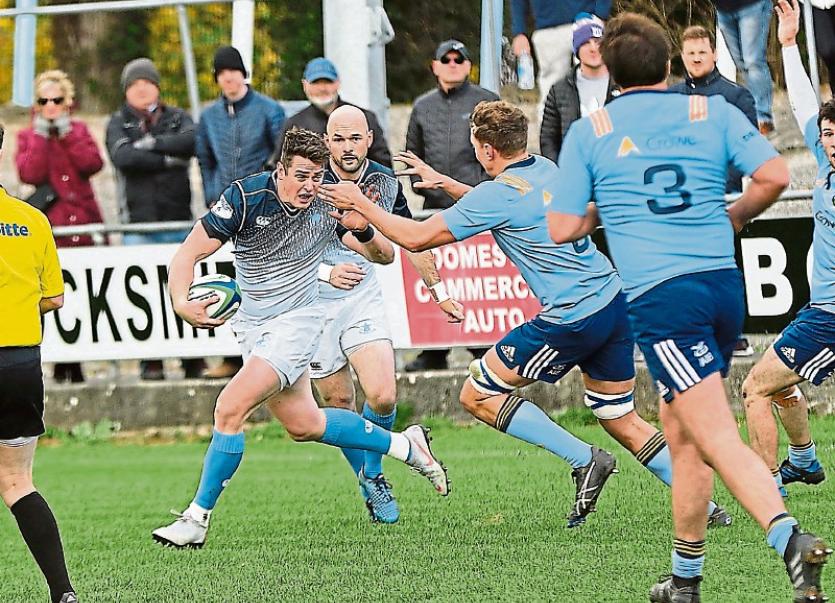 Ronan O'Mahony in action for Garryowen this season

“I REMEMBER being in the crowd, the feeling of it, it was the first time I got shivers, the Munster boys coming out and doing the Haka. I went home that night and thought, whatever happens, whatever I do in my life, I want to play for Munster and that is that.”

Ronan O’Mahony was an awe-struck teenager, a few months after completing his Leaving Cert at Castletroy College in November 2008 when Munster hosted the All-Blacks at the redeveloped Thomond Park.

It was the night Munster, 33-1 outsiders with the bookies and missing 10 Ireland players, came within four minutes of writing another piece of All Black history. In the end, the visitors secured a thrilling 18-16 victory.

The promising O’Mahony was both hooked and smitten by what he saw.

O’Mahony said: “The time it really hit home to me that playing for Munster was something I wanted to do was at the opening of Thomond Park in 2008 when Munster played the All-Blacks. I had just finished my Leaving Cert a few months before.

“From then on, I took rugby very seriously and funnily enough a couple of years later I was facing the Haka myself in Thomond Park, I was able to make it happen, thankfully.

“That Maori All-Black game was in the 2015/2016 season. It was a couple of years later. I remember distinctly being on the pitch that night to face the Haka and thinking just a few years earlier I was in the crowd wishing I was here and now I was there. It is little things like that you look back on and think I was able to make that happen.”

Just over a month ago, a ‘heartbroken' Ronan O’Mahony confirmed his decision to retire from rugby, forced to take the action due to injury. The winger had sustained a broken leg and dislocated ankle when playing against Treviso in April 2017.

O’Mahony, who turned 30 this month, said: “I suppose I knew from day one with the initial injury I knew it could be a possibility that I would have to retire. I had done significant damage to the joint in my ankle and I was trying to battle through it and do everything I could.

“I had a couple of surgeries and a lot of outside intervention as well, specialists over in London and here in Ireland, eventually it wasn't coming right and I was advised by the specialist I had to call it a day.

“I have peace of mind knowing I threw the kitchen sink at it. I have done literally everything I could have done. I put in two massive spells of rehab into it and a lot of interventions, saw everyone I could who knew everything about ankles. I did everything I could to get it right.

“When the injury happened I was having probably the best season I ever I had for Munster that year and it was unfortunate the way it ended. There were only a few games left in the season and there was an Irish tour that summer and I was hoping to get myself somewhere in the mix for that but, look, unfortunately the injury happened.

“I suppose that's part and parcel of professional sport, you know it is always there and it can happen at any stage especially when you are least expecting it.

“It was a bad break, a lot of trauma to the ankle joint, a lot of cartilage damage, so yeah it was particularly bad. I probably knew it from the outset.

“It is unbelievably hard to get your head around it. Rugby is all I have ever done really, sport in general. Growing up, it is the one thing I always wanted to do, always wanted to play and even when I was chatting to the lads and letting them know I was finishing up, rugby was always enjoyment for me, I love playing it.”

So what are Ronan O’Mahony’s stand-out memories from his time pulling on the red jersey of Munster?

“My stand out moments are probably my first cap, the Dragons away in Rodney Parade (April 2013), not the easiest place to go and play. I managed to get a try, started the game, played well. I remember the first kick-off. I was s**ting it more or less.

“I was looking at the out-half, thinking don't kick it off on me, I just remember their 10 turned, looked at me and dropped it straight down on top of me, I was able to gather it and return it with a bit of interest. The game just flowed for me, so definitely my first game.

“As I mentioned earlier, the Maori All-Blacks was one of the most special games for me, just with everything, the lead up, the build-up all week to it.

“We didn't know what tribute the Maori All-Blacks had planned. We didn't know what was going to happen. We were there showing the Haka as much respect as it deserves and then they presented the jersey with Axel’s (the late Anthony Foley's) initials on it. It was a really special moment for everyone who witnessed it as well as those who were watching on TV.

“I know it's a competitive friendly, but when a touring side comes to Thomond Park, it gets very competitive by the time kick-off comes. very special, I loved every minute of it, managed to sneak in for a try too which was good.”

So what might the future hold for recently retired Limerick man O’Mahony?

“Over the 10 months out I did my QFA exams, my financial advisor exams. I don't think I will use them to be honest!

“I suppose I would like to dabble in a few things and see what comes from that.

“I am enjoying my time off at the moment, not having to worry every day about 'am I fit to train or am I fit to play or how is it feeling today, getting physio.’ I am really enjoying the time to myself.”