Limerick FC due to host Cabinteely after dramatic week 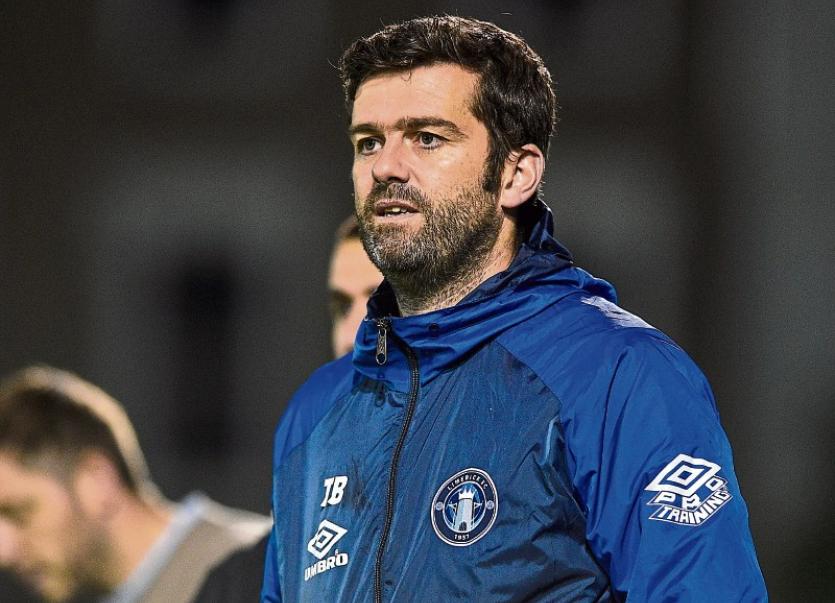 Tommy Barrett is preparing his side for their meeting with Cabinteely

LIMERICK FC are due to return to league action this Friday night with a crucial SSE Airtricity League First Division fixture with Cabinteely at the Markets Field, 7.45pm.

Last week, the Limerick FC players voted unanimously to serve strike notice on the club. Through a PFAI statement it was confirmed that if wages and expenses payments which fall due in the future are not honoured, then the players will go on strike.

However, it is understood that Limerick FC have given assurances to the PFA Ireland that the Blues players will be paid outstanding wages and expenses this Thursday.

Resilient Limerick FC got back to winning ways on Saturday last when edging past Cobh Ramblers 3-2 in a five-goal thriller at St Colman’s Park.

The win, secured courtesy of two goals from the penalty spot from Darren Murphy and one from Shane Tracy, saw Tommy Barrett’s side remain in sixth place in the First Division table.

Limerick are five points off league leaders and Friday night’s opponents Cabinteely after 13 series of fixtures.

Meanwhile, the FAI confirmed on Monday that it is awaiting a UEFA report on betting patterns surrounding Limerick FCs First Division game with Cobh Ramblers at St Colman’s Park last Saturday night after receiving correspondence from the Cork club.

The FAI is currently investigating betting patterns around Limerick’s game against Shelbourne on April 19.

FAI Competitions Director Fran Gavin said: "We have received a UEFA report on the Shelbourne v Limerick fixture in April and are awaiting their report on the Cobh v Limerick game last Saturday.

“We have received correspondence from the Cobh Ramblers Board in relation to that match. The FAI remains committed to a zero tolerance stance on match fixing.”

Meanwhile, Limerick was dealt a blow this week with the resignation from the club of Gary Manning, interim Head Of Youth Development at Limerick FCs Academy. The Limerick FC Academy Committee was due to discuss the matter at a meeting on Wednesday night.