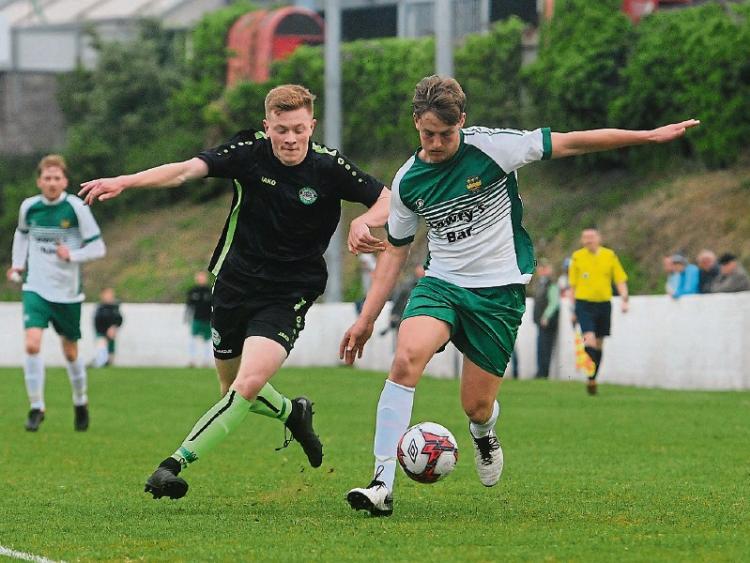 Evan Patterson, Pike Rovers, in action against Shane Ryan, St. Michael's pictured during the Munster Junior Cup final last weekend. Pike will look to go one better this Sunday in the Lawson

The pinnacle of the local soccer season takes place on Sunday morning when Pike Rvs and Fairview Rgs do battle for the coveted Lawson Cup.

When I started covering Junior Soccer for the Limerick Leader back in 2002, games between these two sides were the highlight of the season producing some real classics.

It was at the time Fairview were on the down curve of an incredible decade of success. Since then it has been Pike Rvs turn to hog the limelight.

Pike Rvs will go into the tie as favourites but also with a heavy heart after losing out in last weekend’s Munster Junior Cup final.

Three times during the penalty shoot-out the Hoops had the chance to win the game but squandered all three. It remains to be seen how Pike recover from the setback but they are a hardy bunch and you feel they will be keen to make amends.

Fairview Rgs have steadily improved all through the season and go into the tie with a real chance. They have not won the Lawson Cup since 2001 during which time Pike have etched their names on the trophy six times.

Pike have now gone 42 games without losing in play. Two defeats on penalty shoot outs are the only blemish on a very impressive season to date.

Goalkeeper Gary Neville has been their rock this season, pulling out save after save in the important games. The return to full fitness of Pat Mullins gives the Hoops a more steely look.

In the middle of the field former Fairview favourites Colin Daly and Conor Kavanagh will be out to keep their old side down while up front Steve McGann and Jonathan Grant will be the main Pike threat.

Fairview started the season poorly but a determined effort by the Club saw them steady the ship and they have been quietly improving game by game.

Veteran striker Robbie Kelleher has had a good run with injury and it has been to the benefit of the Blues.

He has been in superb form and while he may lack the speed of yesteryear, his footballing brain more than compensates.

It was no coincidence that the return to the club of Jeffery Judge overlapped with the upturn in their fortunes.

He is a real leader and demands the best from those around him. Alongside him the live wire AJ O'Connor will not fear the challenge.

The sides met in the Tuohy Cup and the game finished 2-2 before Pike progressed after a penalty shootout.

They also shared the spoils in both their league games so you should expect an equally close affair.

Kick off is 11am in Jackman Park.

At the time of writing Aisling are still tied up in appeals with the FAI Junior Council but on Sunday they are in action in the FAI Senior Cup when they meet Lucan United. The Leinster Senior League side are Division 1A Champions and will prove a stern test for a young Aisling XI.

Many people question the worth of Junior teams playing in the Senior Cup but it does give the Junior side a chance to test their progress.

On Saturday evening we have the play off for the Division 1B league title between Newport and Hill Celtic.

With promotion already secured both teams can go all out to be crowned Champions which should provide a treat for the fans. They sides met in the Divisional Cup final a couple of weeks back and produced an exciting tie which the Tipperary side won thanks to a brace from Christy Doyle.

Even Newport would concede that Hill Celtic were unlucky on that occasion, so they will be determined to make up for that loss. At the time of writing the venue has yet to be decided but details will be on the website as soon as its announced.