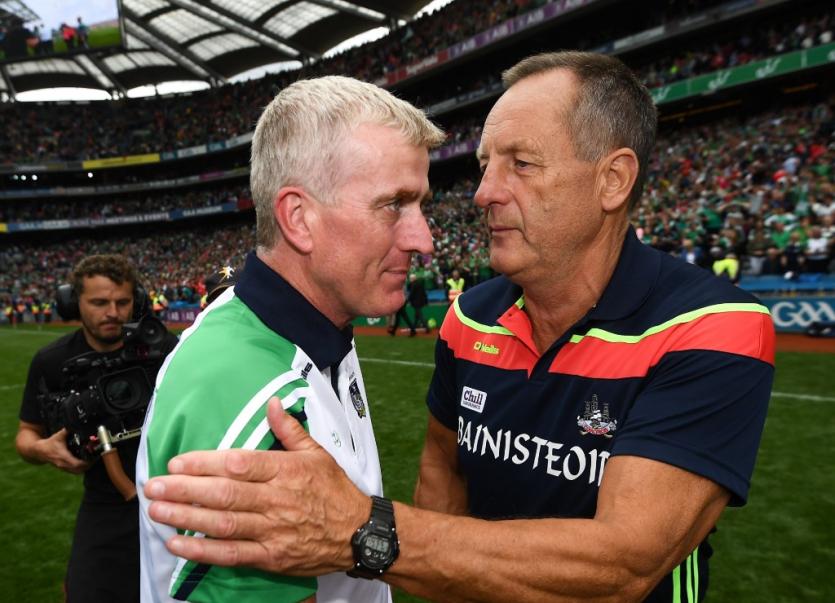 This Sunday (4pm) will be the eighth competitive meeting of the sides with three wins each and one draw ahead of the LIT Gaelic Grounds encounter.

Noteworthy, Limerick haven't beaten The Rebels in 70-minutes in the last three ties.

Enroute to the Allianz Hurling League title this Spring, Cork were the only side to beat Limerick in an eight game campaign.

That February 24 tie finished Limerick 1-21, Cork 2-21 in front of 13,407 in the Gaelic Grounds. Limerick were down nine points and battled back to level but Cork found the late winning points as John Kiely's side were left to rue 17 wides.

It’s most likely 10 of the starting team from that round four group game will be in the starting team again this Sunday for the first Gaelic Grounds championship meeting of Limerick and Cork since the 2013 Munster final.

It’s quite a rivalry that Limerick and Cork have developed in recent times and a look at the results of the last seven encounters would suggest that at least 1-23 will be needed to secure a win on Sunday with the lowest final score of either side standing at 1-18.

Aside from a 2017 Munster League encounter where Limerick were hit for seven goals, green flags have been scarce with just an average of one goal each per game.

Limerick did find two goals in extra time to edge past Cork in the All-Ireland semi final last July but with 10 goals in eight league games this Spring, the average goals scored still remains less than two per game across all opposition.

Ahead of Sunday, the bookies make Limerick the 4/9 favourites to win with John Meyler’s under pressure Cork available at 9/4. The men in green remain the 3/1 favourites to again lift the Liam MacCarthy Cup in August.

While Cork did disappoint in last Sunday’s defeat to Tipperary, they are back-to-back Munster champions and will most likely have Bill Cooper and Alan Cadogan back in their plans.

While Limerick have five new faces, added to those remaining from last year's Liam MacCarthy Cup winning panel - Conor Boylan, Robbie Hanley, Aaron Costello, Mikey O’Brien and Jamie Power, Cork too have looked to freshen up their options this season with Niall O’Leary, Declan Dalton and Jack O’Connor among their younger talent.

Off the field of play, Limerick have a new coach (Aonghus O’Brien) and a new Performance Psychology Coach (Tony Og Regan), while an eye-catching addition to the 2019 Cork backroom team is former New Zealand and Munster rugby star Doug Howlett as their High Performance Lead.

The man in the middle on Sunday will be Carlow's Paud O'Dwyer, who also refereed the All Ireland SHC semi final last July between the two counties and was the linesman when Aaron Gillane was sent-off in Pairc Ui Chaoimh last Summer.

After Sunday, Limerick have a break until a Sunday June 2 away to Waterford in Walsh Park at 2pm.