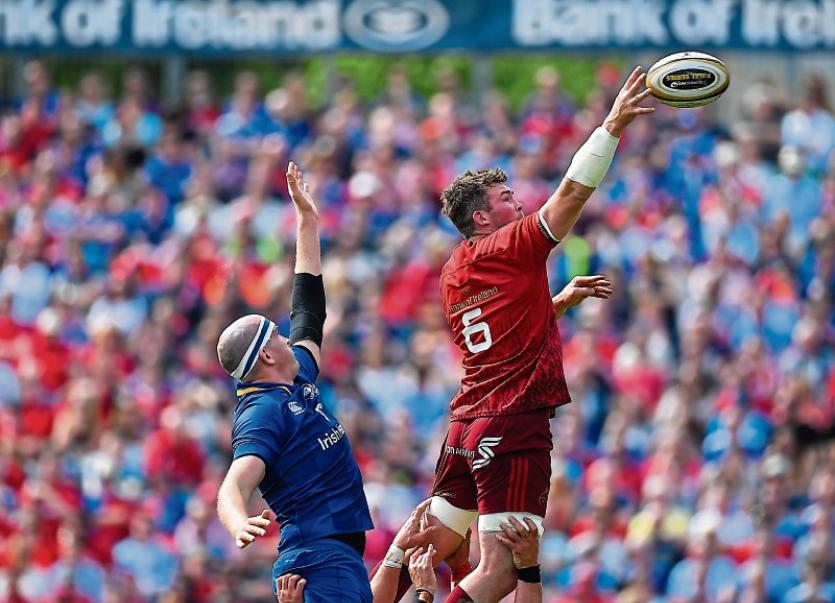 MUNSTER will be seeking just their second win in seven visits to Dublin’s RDS when locking horns with fierce rivals Leinster in their Guinness PRO14 semi-final clash this Saturday, 2.30pm.

Munster have made six previous visits to the RDS Arena including two Guinness Pro 14 semi-finals in 2010 and last year, but their only victory at the Dublin 4 venue was an 18-0 success in September 2008.

While Munster go into Saturday’s derby clash on the back of a ‘free’ weekend, Leinster were defeated by Saracens in a bruising Heineken Champions Cup final in Newcastle.

Saturday will be Munster’s 10th appearance in a Pro 14 semi-final, with the province winning five and losing four of those previous fixtures.

Munster’s 26-17 defeat of Leinster at Thomond Park in the Guinness Pro 14 regular season in December ended a run of four successive victories for Leinster in the fixture.

The two provinces have met in five previous semi-finals in all competitions with Munster taking the first two and Leinster the last three.

Munster look set to be boosted by the return from injury of both Joey Carbery and Keith Earls for the trip to Dublin.

Much of the pre-game focus has centred around Munster’s hunt for three new assistant coaches following confirmation that Jerry Flannery and Felix Jones are set to leave the province this summer.

Head coach Johann van Graan indicated that the province was looking to bring in an additional assistant coach prior to the news of Flannery and Jones’ departures from the set-up.

Van Graan said: “The continuity is one of the most important things in world sport. Obviously we will lose a bit of continuity on the coaching side. It is something that I hoped that we could retain. But that is professional sport and you have got to be able to adapt.

“The positive thing about it is we have retained 22 players. Our playing squad will be exactly the same, bar Nick (McCarthy) coming in front the outside. Unfortunately life happens. We will have to adapt.

“Luckily we have done our pre-season planning in terms of what we need to do. We have got a fantastic medical and S&C staff that will handle the first part of the pre-season. Because of the World Cup the PRO14 will start so much later so we have got a bit of time.

“I am not going to sit here and say it is ideal but it is what it is now and we have got to deal with that and see the positive out of it. There is massive opportunity in this disappointment and hopefully we can see the bright side of it.”

Van Grann believes the aerial battle is one area Munster will need to improve on this weekend at the RDS from their recent Heineken Champions Cup semi-final defeat to Sarries.

“Against Saracens, we didn't start particularly well - we lost the aerial battle and I believe it's something Leinster will target, it's something that we've worked on.

“Then, finishing our opportunities, in the semi-final against Sarries we had some opportunities where we weren't clinical enough.

“So use your opportunities and the most important thing if you want to get to a final you have got to play well. We've got to really go down to Dublin and play well to beat Leinster.”