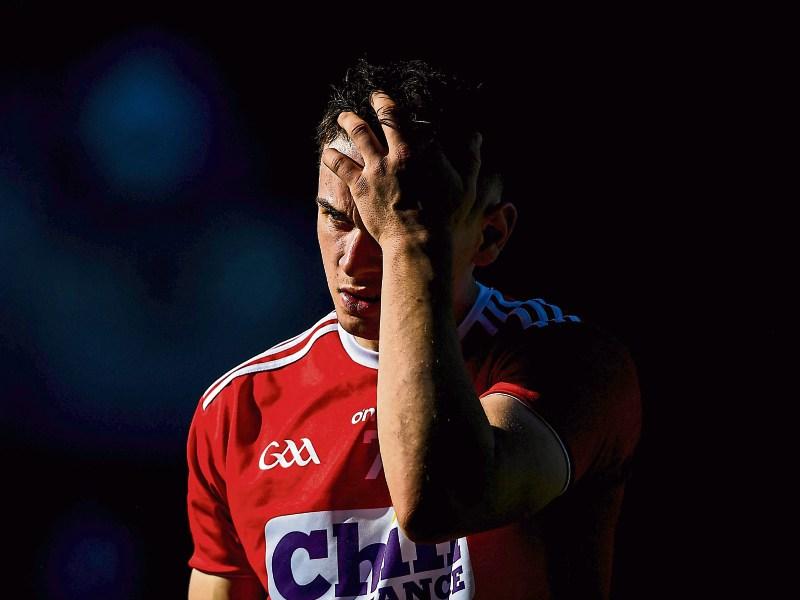 Pressure in on: Mark Coleman of Cork reacts following his side's loss to Tipperary in the Munster GAA Hurling Senior Championship Round 1 clash in Cork last weekend

Limerick might well be the last team into the Munster Championship but they can be assured of a massive welcome when they hit the Gaelic Grounds next Sunday afternoon against Cork. What better way to start the championship than at home and as always Cork will want to spoil the party.

Limerick have shown superb league form and in doing so the National League was also secured for the first time since 1997.

I was somewhat concerned by the attitude of some teams and how they approached the latter stages of the league and like many times before the league is not always the best guide for the championship.

From Limerick’s point of view they could only look after their own business and that they did really well. It will be very much that way again on Sunday.

Sometimes teams spend too much time analysing the opposition and less time getting themselves right. I don’t see that happening with Limerick. They will be confident enough to focus on themselves and if we know anything about John Kiely we can be assured he will have every angle covered.

There is a great level of anticipation for this game. For the first time in my lifetime I will see a Limerick senior team defending their title.

I am long enough watching Championship to know that it’s really very hard to know where you are until you are deep in the mix.

Yes, Limerick had a great league and yes, they did play at a level that others found hard to match but Championship has a way of asking questions and I expect Cork will want to ask questions of Limerick and get their ambitions back on the road.

The one thing that has consumed them is how they fell away in the last ten minutes in the All-Ireland semi final. Six points up and looking like winners but Limerick found a way to win.

That was a key part of Limerick in 2018. They were patient and focused and bit by bit they broke teams down.

Limerick will be asked questions. That could be early, it could be in the last ten minutes and then and only then will we really know the effects that winning an All Ireland can have.

I spoke with a member of the Limerick set up recently and when I asked how were things going he replied, “It might be hard to believe but they are well ahead of last year in every way.”

Some people might think that is a loud boast but it was far from that. The man that told me is cool, calculated and measured so I would place some weight on his opinions. Limerick play flamboyant hurling when in full flow.

They have all of the elements that make good teams great. The speed at which they move the ball, the accuracy at which they find their own men is just superb. They can go short, they can go long and when they play the diagonal ball into the forwards it is really very hard to defend.

How Limerick play the ball out of defence will have taken up a good bit of time in various teams. Last year their entire half forward line motored deep into the defence closing space but most noticeable starting the attack from their own half backline.

Will that be allowed happen this year? I don’t think so. Teams will get men back there with them and they might also put the odd road block in place before they get anywhere near the Limerick half backline.

Championship provides us with the great unknowns, it leaves us scratching our heads and wondering what will happen and then how did that happen.

How Limerick returned after Christmas and the level of fitness and focus they had was a credit to the people working with them.

It was a credit to the players too because they are the people that must make it happen. They weren’t shouting it loud but this team wants more, they are the men driving the management to greater heights.

The window for success is small. Teams will come wanting what you have so it’s about making the very best of what you have when you can because the modern game demands so much of the players.

We saw last year that winning home games are really important and a win in this game will provide Limerick with the ideal foundation for the rest of the year.

From a team selection point of view I think we might see a couple of changes but overall it will be along the lines of last year.

Mike Casey has returned well from injury and is going well in training. He came back at the latter stages of the league but time with the club and county has seen him in flying form again.

The changes, if any will take place in attack. Peter Casey had a good run in the league and there will be a temptation to start him on Sunday.

Will Seamus Flanagan return to full forward where he was outstanding last year? Flanagan did so much damage and we saw it to it’s best against Cork last year and also in the All Ireland final where he was truly magnificent.

Graeme Mulcahy had the year of his life in 2018 and it would be a big call not to start him. Limerick have a really strong panel, I would suggest the strongest panel starting out this championship and for that reason it’s about having the guns to call on when needed and they have that for sure.

Cork will have been very disappointed with their performance last Sunday and they will know how important this game with Limerick is.

If they loose the pressure grows but if they win they are back on the road. Cork will bring a challenge but Limerick have an appetite for more and that can often be the sharpest tool.

There will be a great buzz in the Gaelic Grounds for this game, Limerick will travel in big numbers and while Cork supporters will feel they still have a part to play in this Munster championship.

It has taken seven years for Limerick senior footballers to record a win in the Munster championship but their victory over Tipperary was just superb.

For the players and the management this win will have given them a great boost and it certainly provides a foundation stone for them to build upon.

Tipperary were hot favourites but Limerick strolled down and with great efficiency put the premier men to the sword.

For Billy Lee who has given so much to football this was a superb achievement and his team now face Cork in the Munster semi final. This is one small step on the road to recovery for Limerick football but this win will provide motivation at all levels.

Limerick's win was the result of the weekend and it was also the first major shock of the championship. Limerick were given no hope but the players had other ideas. They will face Cork away and while Cork are also rebuilding they will again be favoured to win against Limerick. That will suit Limerick who can now go and express themselves even more.