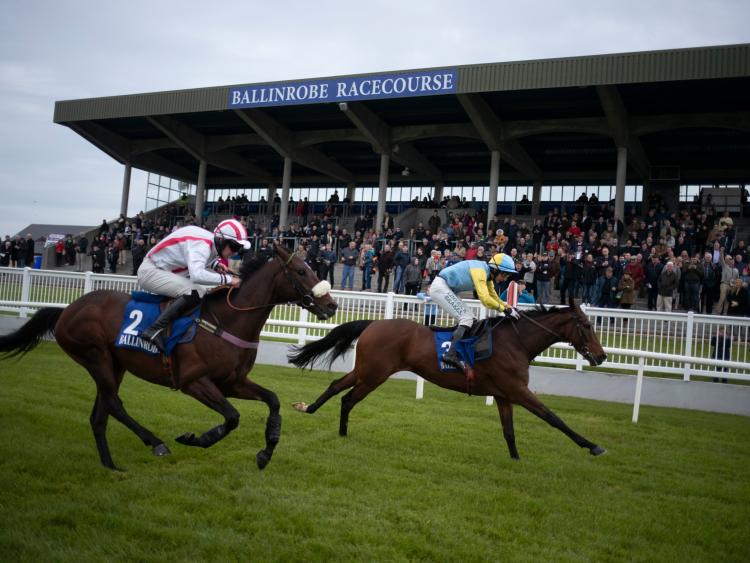 Billy Lee took the new-look Curragh by storm on Monday when riding three winners for three different trainers. He took the opening two-year-old maiden on the Paddy Twomey-trained Sunday Sovereign which raced to a three-length success in the colours of the Sunday Racing Club. He followed up straight away when partnering the Willie McCreery-trained Ickworth to a two and a quarter-length win in the Listed First Flier Stakes and rounded off a big day when taking the 6f handicap on Michael Grassick’s 10/1 chance Verhoyen. Chris Hayes was also an opening day hero as he took the Listed Tetrarch Stakes on the Dermot Weld-trained Shelir, the 8/1 winner could reappear in the 2,000 Guineas at the course later this month.

At Down Royal on Monday, Conor McNamara recorded the sixth winner of his career when landing the concluding bumper on Tritonix for trainer Gavin Cromwell. He got the 14/1 chance home by a neck from the Gordon Elliott-trained 4/5 favourite Global Society in the colours of the Here For A Good Time Syndicate.

Oola jockey Cathal Landers landed the 2m1f beginners’ chase at Ballinrobe on Tuesday on 3/1 shot Cooldine Bog. The Andy Slattery-trained six-year-old got the better of Cliff House late on to score by half a length under Landers who had ridden the runner-up to finish second in a similar race at Down Royal on the previous afternoon.

Billy Lee shared a second winner with Paddy Twomey when Loveisthehigherlaw took the 10f fillies’ maiden at Cork on Friday night as the 12/1 chance won by three-parts of a length.

Dermot Weld, who trained Blue Wind to do the English and Irish Oaks double in 1981, looks to have another smart filly on his hands after Tarnawa claimed the Irish National Stud Racing Irish EBF Blue Wind Stakes in the hands of Chris Hayes. Weld was winning the Group 3 contest named after his former inmate for the fourth time this decade as Tarnawa overturned the odds-on favourite Who's Steph by a neck. Weld commented afterwards: "I thought that she would be hard to beat today and that was a good performance as the second is a very good filly. She's tough and stays well and we will just see how she comes out this before making plans but Epsom (Oaks) is a possibility." Hayes also weighed in on a Weld-trained winner at Naas on Sunday where Baladiya won the 6f maiden.