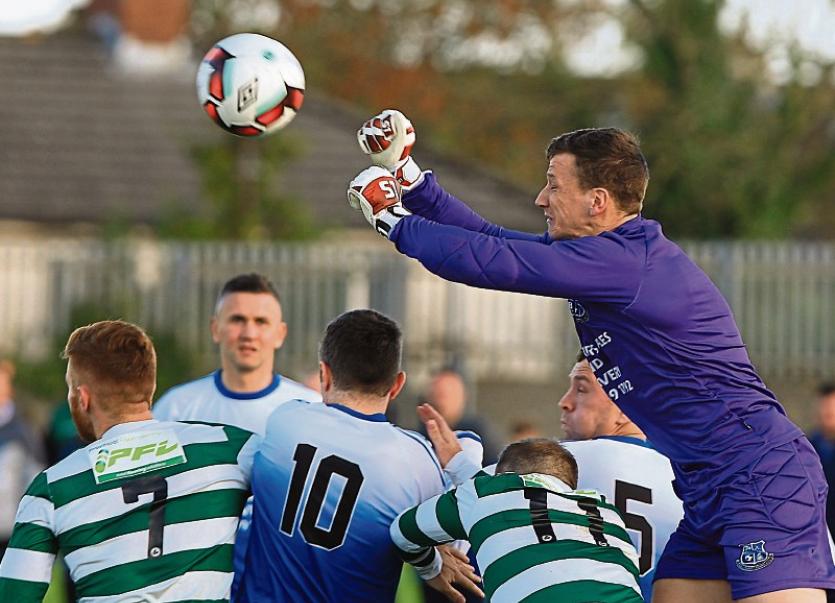 Ballynanty's keeper Stephen McNamara clears the danger during a recent meeting with Pike Rovers. The ‘Hoops’ play Kilmallock this week as the title race hots up

The focus this weekend is in the Premier League where the top two sides play vital games. The spectre of objections reared its head again and it is now likely that they will determine the destination of the Fran Mullally Trophy for 2018/19.

At the time of going to print, Janesboro and Ballynanty have been awarded the three points from their respective meetings with Regional earlier this season. This means that the three sides at the top are separated by just four points.

The Limerick District League held off on making a decision until Regional's arbitration hearing was complete.

Following the arbitrators decision it is likely the LDL will follow suit and restore the three points to Janesboro which will see the Champions back in pole position with two games remaining.

On Saturday they will have to see off Prospect to keep their charge on course while Pike welcome Ballynanty Rvs to Crossagalla a day later.

We have two cup finals at the weekend. On Saturday Newport and Hill Celtic do battle in the Calvert Cup while on Sunday the Div 3B Ingle Cup Final pits Northside against Cappamore.

Meanwhile Aisling's FAI Junior Cup dreams were shattered on Sunday when they fell 1-0 to Sheriff YC in Dublin.

Much has been made of the shambles that preceded Sundays tie and the FAI organisers continued with the same disregard for Limerick teams when announcing 55 minutes before kick off that the game was to be played on Astro Turf.

After a challenge by Aisling, they switched back to the grass pitch at AUL Complex.

The mix up only added further to Aisling's confusion regarding the tie.

Its a pity Aisling's exploits are lost in the mess. Mike Aherne's side can hold their heads high after a great run in the competition.

It is one of the youngest sides ever to compete at such a late stage of the competition and kept together will no doubt be back for more.

The Limerick side had an early chance when Nathan O’Callaghan was denied at the back post.

An injury to Kennedy N'dip forced him out of proceedings after ten minutes which brought 15 year old Ronan O'Dwyer into the fray.

A last gasp block on Dylan Sheehan denied Aisling an opener and the hosts escaped when the Referee failed to spot Floods hand ball.

Sheriff went in front when Stephen Maher slotted home from the spot after 28 minutes but the visitors reacted well and from the start of the second half had the homesters on the back foot.

A flick on by O'Dwyer was saved by the legs of keeper McGuane and Ben Banaghan also went close.

Disaster struck for Aisling when reduced to ten men but they still forced the issue with O'Callaghan and Banaghan going close with later efforts.

In the end the Aisling youngsters fell just short but will have picked up valuable experience.

In my opinion, the incompetence shown by the governing body will no doubt go unpunished such is the state of affairs.

The removal of Regional was deemed correct by the arbitrator. I'm sure a large number of clubs realise now, as a result of this ruling, that they may also have ‘illegal’ players in their line up.

For next season every player signing must be quizzed on their past and if they ever played outside the jurisdiction.

A club has no database to check so must go on the word on the player.

What can be done to inform the FAI of the views of the Limerick Soccer fraternity?

The Limerick District League should officially register their disgust at the treatment of both Regional and Aisling even if the governing body in Dublin will take no heed of them.

They harp on consistently about the FAI Junior Cup being the biggest tournament in Europe.

In reality only a handful of clubs have a hope of winning the competition and you do not expect them to give up on that dream.

Maybe clubs need to look at this, as an option.